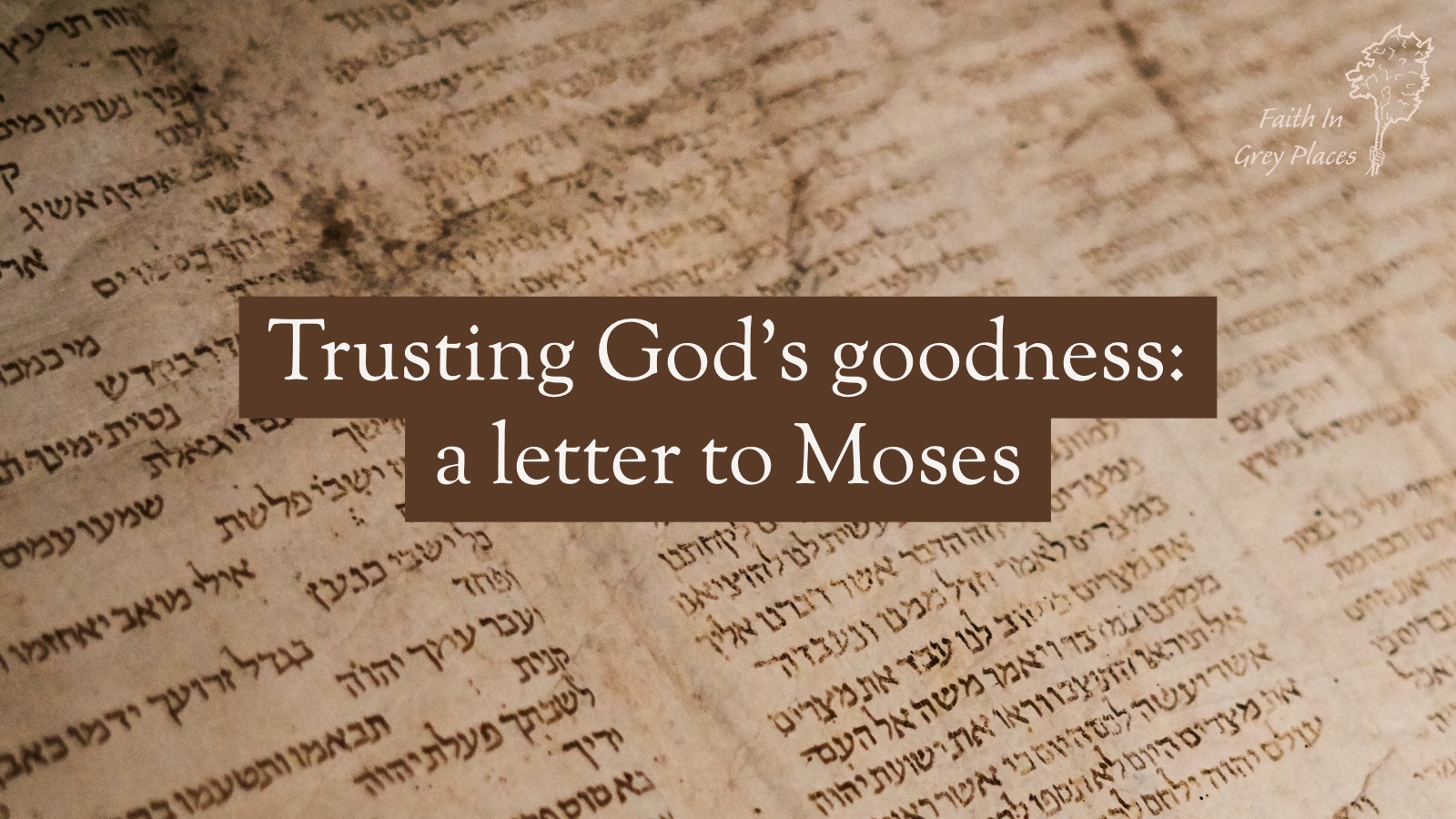 This is part of the series of letters I’m writing to people listed in Hebrews 11 as the “cloud of witnesses” who went before us. This one is the second of two letters to Moses. The first letter is on my blog here.

The author of Hebrews mentions Moses both as a young man and as a much older one, when he led the Israelites out of Egypt. Far from how Hollywood is wont to portray him, Moses was 80 years old during the Exodus and, I suspect, someone who stammered (Exodus 4:10, Exodus 6:12 – albeit there are other ways to interpret these verses).

The author of Hebrews commends Moses for his faith in instituting the Passover and in leading the Israelites through the Red Sea (technically it was the ‘sea of reeds’). There is much that could be said about this.

There are parallels with Easter and Christian sacraments: Passover was a deliverance event, like Good Friday was. Passing through the Red Sea was an event that set apart the people as God’s people, as Christians do with baptism (cf 1 Corinthians 10:2). And then, the annual celebration of Passover was a symbolic re-enactment of, and participation in, the people’s deliverance story. They become a living memory of the event in a way that maintains their relationship with God and with each other. And yes, this is what Christians do with Holy Communion.

However, in this letter, I dwell very little on all that. Instead, I focussed on agency. The whole Exodus story is a very strange one when viewed through the lens of God’s love for all humankind or indeed God’s concern for the individual. After all, it’s a story with a lot of destruction in it! And I don’t for a minute believe that every Egyptian deserved what happened to them.

I wrote in more detail about how I square all this (or rather, leave it open-ended) in a post for the Christmas 2020 series: the one on judgement.

Here, what I really grapple with is the place for my individual agency and whether that has any significance in the works of God. It’s probable that what I offer is just a modern, individualistic expression of someone reaching to be relevant and still too wrapped in self-concern to look up. But hey, it’s where I’m at right now.

I tell you, when you read it all in a single sitting, you don’t half feel a sense of release when you get to chapter 15.

By faith he kept the Passover and the sprinkling of the blood, so that the one who destroyed the firstborn would not touch them. By faith they crossed the Red Sea as if on dry ground, but when the Egyptians tried it, they were swallowed up.

I always felt God gave you a hard deal. When he commissioned you to free the Israelites from slavery, he said the sign would be that they would worship him on that mountain. That might have lifted your aspirations and given you something to look forward to, but it’s hard to make a future event load-bearing for your faith. You need a past event instead.

And OK, God gave you some miraculous signs, and there was, of course, the burning bush itself. But honestly, how did you keep going when all Pharaoh could do was oppress the Israelites even more?

I can only guess that your encounter with God was so powerful that you were left in no doubt about what he could do. I’ll be honest, I never know what to make of that. On the one hand, I am totally here for a jaw-dropping revelation of God’s holiness and power. You know, the idea that nothing, absolutely nothing, can withstand him or his purposes. On the other hand, when the Bible speaks of God in this way, it’s easy to get the feeling that God is just as willing to trample over the agency of the people who serve him. And I don’t like that.

I’m guessing the biblical authors were less concerned by this. The whole point of the Exodus narrative was to show how God was greater than the gods of Egypt, and to give the Israelites a unifying story of freedom. (I would say “origins story,” but really that was Abraham.) They also probably saw you as God’s servant, or indeed slave. Thus, to them it was perfectly normal for God to give you commands without you have much say in the matter.

For myself, I often feel caught between two fires. On the one hand I don’t want God to be so regimented in his plans that I find myself with no influence on anything. On the other, I’m terrified that he’ll give me choices and I’ll just… let him down. Did you ever have that?

Part of me wonders whether these fears come from a desire to know that God is good and to be good myself. There are plenty of heart-warming stories in the Bible about how God treated individuals, but, as I said, when I read biblical accounts of how God deals with nations… it’s easier to doubt.

Some people say the ten plagues of Egypt never happened. It’s attractive to us today to think that no innocents suffered, though that version of events does empty Passover of its power somewhat.

I’d rather believe that it did happen, but that God is capable of meeting each and every person — Israelite and Egyptian — with the same compassion that we see elsewhere in the Bible.

And I’d rather believe that what he offers and is willing to give in the next life will make even the most powerless and downcast forget their sorrows.

You know what I’d really appreciate right now? More of your faith. The wisdom to recognise when far bigger purposes are being worked out and the only thing I can really influence is how I play my part in it. The confidence in God and what he asks of me, that I can act in fearlessness—and engender that same fearlessness in others. And to be so attuned to the way God opens up possibility that I can answer off my own back when others express their doubts.

In short, I don’t know how you managed to live the life you led. But, God-willing, I’d like to find out.

I write to you in the hope and peace of the one who never leaves us,

Photo by Tanner Mardis on Unsplash