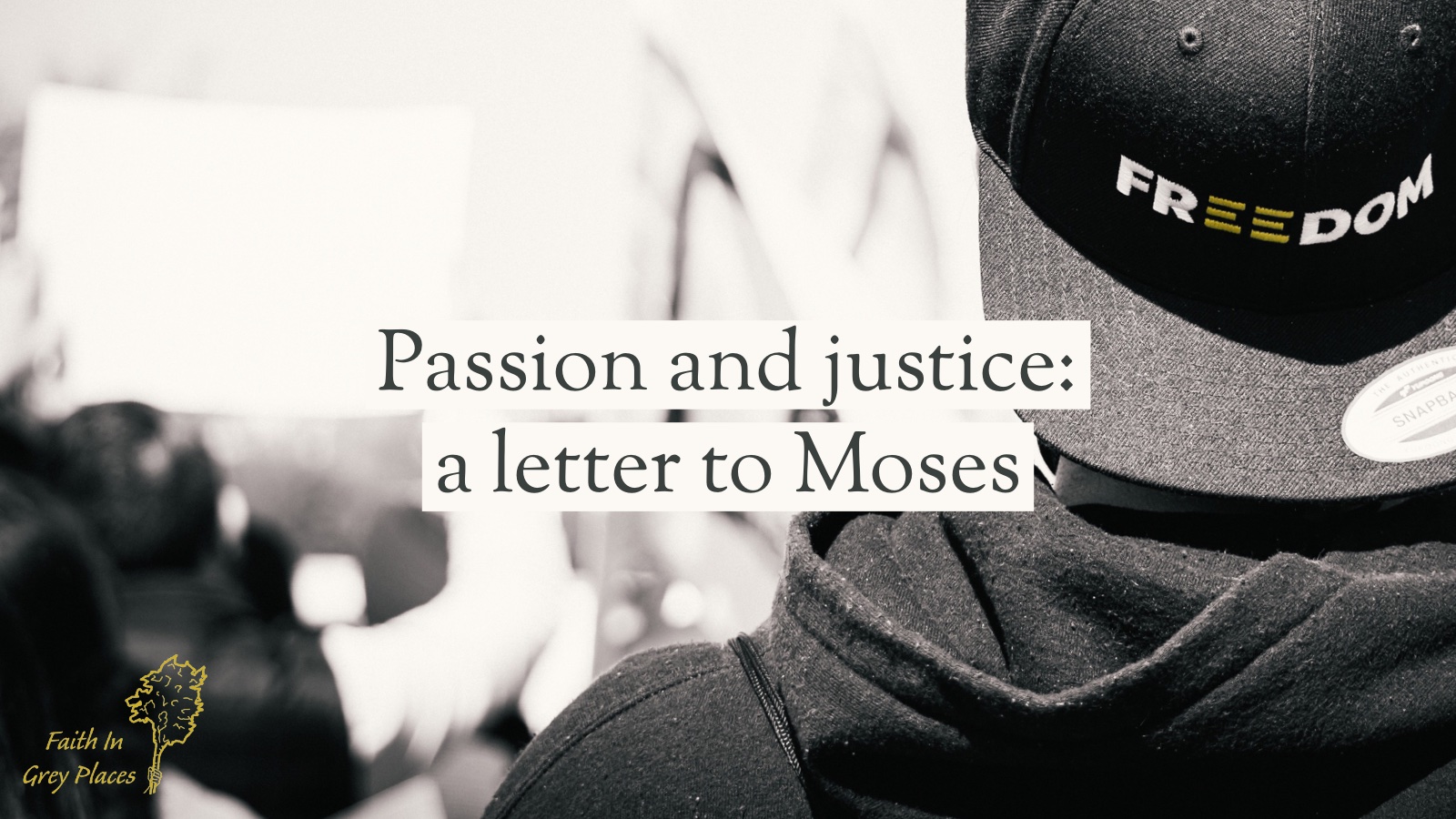 This is part of the series of letters I’m writing to people listed in Hebrews 11 as the “cloud of witnesses” who went before us. This one is the first of two letters to Moses.

When the author of Hebrews writes about Moses, there are several “by faith” statements. In this letter, I’m going to focus on the first two: about how he refused to be considered an Egyptian, and how he left Egypt.

Now, I assume that when the author of Hebrews wrote about Moses leaving Egypt, they were referring to Moses’s first departure. That is, when he fled Pharaoh because news had got out that he’d murdered an Egyptian. (Albeit, Moses killed the man because he’d been beating an Israelite.) It’s possible the author of Hebrews referred to when Moses left Egypt with the rest of the Israelites, but if that’s the case, then the events of Moses’s life were presented non-sequentially. After all, Passover was the night before the exodus.

By faith, when he grew up, Moses refused to be called the son of Pharaoh’s daughter, choosing rather to be ill-treated with the people of God than to enjoy sin’s fleeting pleasure. He regarded abuse suffered for Christ to be greater wealth than the treasures of Egypt, for his eyes were fixed on the reward. By faith he left Egypt without fearing the king’s anger, for he persevered as though he could see the one who is invisible.

You’ve had a tainted reputation in Christian circles. It was well established that Jesus debated with religious hypocrites, but despite the times Jesus pointed out that they were nothing like you, we’ve still put you in the same bucket as them. Because they kept saying they were your biggest fans.

With the Reformation, speaking of Moses became synonymous with speaking of the old law, dead works and a perishing covenant. And what Christian in their right mind would want to do that?

I find it so weird that Christians think of you in this way, especially when the author of Hebrews commends you for your faith.

When I read the account of you in Exodus (which, like much of the Old Testament, is very concise), and how you killed and Egyptian and fled Pharaoh, I always thought you were afraid. But the author of Hebrews says you weren’t, so… which of us is closer to the truth?

I’ve always thought of your encounter with God at the burning bush to be a pivot point in your life. And that’s probably true, but historically I’ve read too much into it. I thought that your journey of faith started there on the mountain, but the author of Hebrews says it started long before.

They say you refused to be counted as an Egyptian. Unsurprisingly, the book of Exodus doesn’t have that detail, but if you were so angered by how the Egyptians treated the Israelites, then that says something about which side you identified with.

I find it really interesting that you killed that Egyptian. Oh, I know, what you did was violent, even murder, and “two wrongs don’t make a right,” as they say. I don’t think it’s the kind of thing your older self would have done. But still, I find it interesting. You saw something that made you so angry, that you were willing to take a life. And it wasn’t because your ego had been bruised, but because you were concerned for the livelihood of someone else. And let’s not be naïve: you weren’t responding to one act of abuse. You were in a context of unrelenting brutality and slavery. Maybe you’d thought about it several times before, but this was the time you decided to act. And had your upbringing given you alternatives to violence?

I think it’s very easy for privileged people to condemn violence, especially when they are accustomed to living in peacetime. I don’t want be so simplistic, though I don’t want to endorse violence either. Which is why I am fascinated to think of you as young and reckless enough to do something so outrageous, because of your sense of justice.

I think there are a lot of young people out there, angry at how the world is, looking for avenues to direct their energy and attention. Maybe they could learn from your story. They could take comfort in knowing you got angry, very angry. And no, your actions did not, at that time, lead your people to freedom. But your sense of justice was something that God could work with.

JD Salinger wrote in one of his novels:

It’s a saying attributed to Dr Wilhelm Stekel, though the original was penned by Otto Ludwig.

Humility is a hard quality to find, but in your later years, you had it in spades. It comforts me that a man of such maturity could grow from the conflicted youth you once were.

I pray that those of us who’ve been spared the crucible of hardship will remember that you were a person of faith, even when you were younger. Because if we do, then I think we stand a better chance of sitting with the youth of today and lifting their eyes to a hope worth living for.

I write to you in the peace and hope of the one who began a good work and will carry it to completion,

FYI, there’s a fascinating article on Quote Investigator about the origins of variations of the JD Salinger quote.

Photo by Gayatri Malhotra on Unsplash