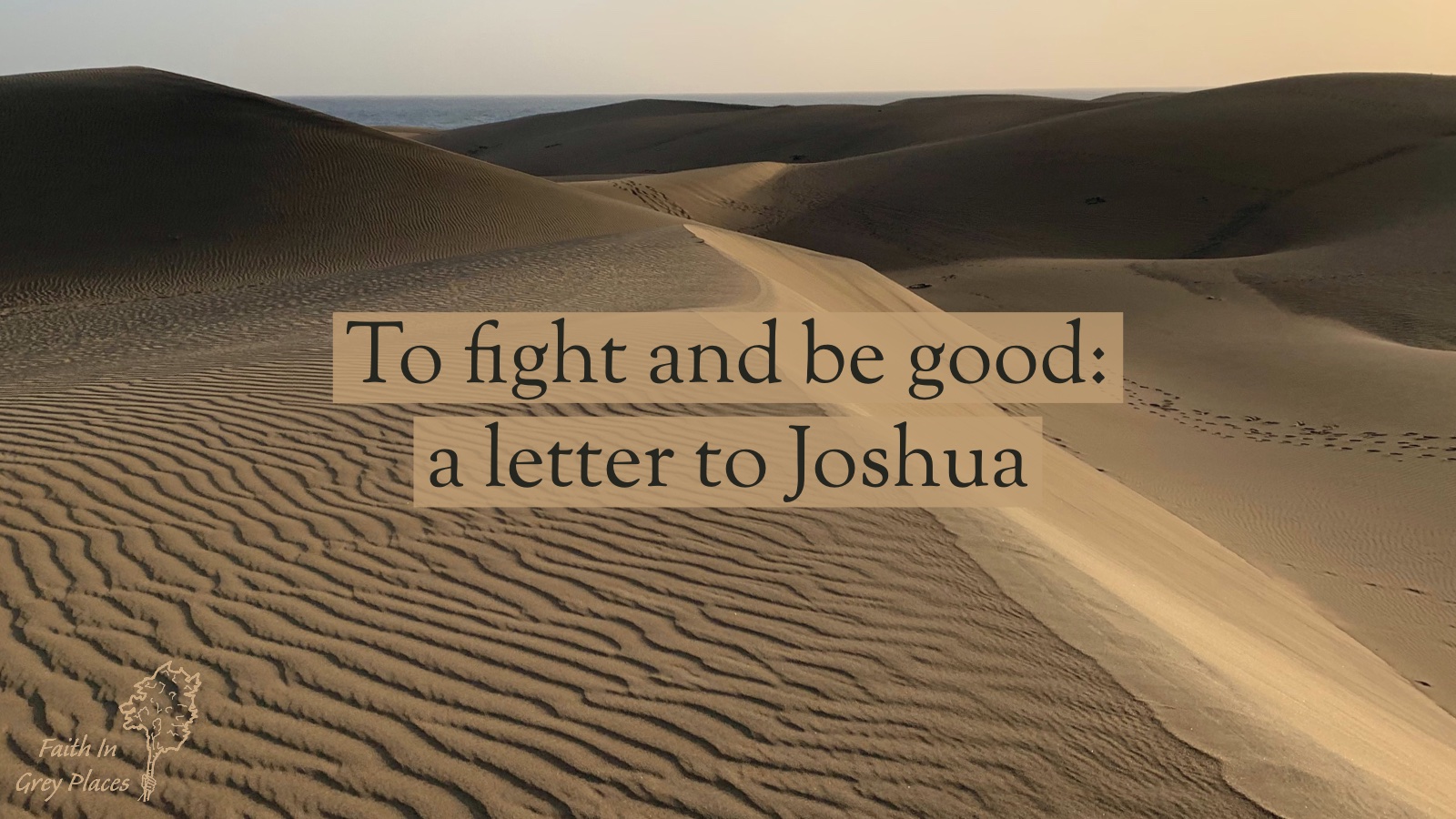 This is part of the series of letters I’m writing to people listed in Hebrews 11 as the “cloud of witnesses” who went before us. This one is to Joshua.

Joshua was Moses’s successor, though he had quite a career before Moses died. He fought the Amalekites (Exodus 17); he went with Moses, at least part of the way, when Moses went to meet God on Mount Horeb (Exodus 24); and he had a habit of sitting at the tent of meeting (Exodus 33:11).

Joshua gets particular credit as one of twelve sent to spy out Canaan. Although, ten came back saying any attack would end in disaster, Joshua was one of two saying that God would give them the land if they would but go forward and take it. Because the people weren’t willing to go into Canaan, they ended up staying in the desert for 40 years. Nearly all of that generation died, but Joshua lived to enter Canaan.

He had the spirit of wisdom because Moses had laid his hands on him (Deuteronomy 34:9) and he succeeded Moses.

Of course, the big elephant in the room is the idea that the Israelite conquest of Canaan was a massive, genocidal land grab, dressed up as a holy war. Ooof. Um… there is strong evidence to suggest that it didn’t actually happen the way the Bible tells it. That what we have in the book of Joshua is a mixture of literature from different times. I don’t know if that makes the book easier or harder to read, but it’s consistent with the dearth of archaeological evidence.

Anyway, I’m not one to shy away from the big questions, so here’s my letter to Joshua. The story of him defeating Jericho is Joshua 5:13–6:27.

By faith the walls of Jericho fell after the people marched around them for seven days.

I went to see Dune Part 1 in the cinema this week. I won’t lie, it had me gripped. The hero is a young man, Paul Atreides. He was born to privilege, but his father is a good man. As Paul wrestles with the prospect of having to lead, his father says to him:

A great man doesn’t seek to lead; he is called to it. But if your answer is no, you’d still be the only thing I ever needed you to be: my son.

What a wonderful thing to say?

Growing up, Paul trained mentally and physically and, having inherited his father’s heart, he goes on to face the challenge of a lifetime. Of a generation, even. We’ll see more of that in the sequel no doubt, but one thing is sure: in order to bring peace, Paul will have to wage war against a brutal, forceful and numerous foe.

I like to think you were like Paul. Though you weren’t Moses’s biological child, you inherited his spirit and trained with him. You sat at the tent of meeting. I love the idea of growing up immersed in a hallowed space where the wonders of God are sought out daily. And of course, like Paul, you knew how to fight.

As I say, I like to think you were someone who didn’t love war, but was capable of waging it. And winning it.

Today, many Christians consider the conquest of Canaan, or rather, the Canaanite genocide to be one of the most baffling and disturbing sections of the Bible. We’re sceptical that the inhabitants of Canaan really were as worthy of destruction as the villains of Dune seem to be. Many Christians write off this particular Bible story as not reflective of Jesus (same name as you!) and or truly revelatory of God. Others say it probably didn’t happen—and if I’m honest, I think they have a credible case.

Even so, your story is told to children in Sunday Schools: how God promised he’d never leave you and how you fought the battle of Jericho. Church sermons and talks from Christian organisations frequently borrow images from your story as they pioneer into new ventures.

I first read your story properly as a teenager. The bit that got me is when you saw a man standing in front of you with a drawn sword. This bit:

Joshua went up to him and asked, ‘Are you for us or for our enemies?’
14 ‘Neither,’ he replied, ‘but as commander of the army of the Lord I have now come.’

It blew me away. It harkened to that part of me that loves the majesty and mystery of God. I want to believe that actually happened.

I’m told that the biblical account of the conquest of Canaan, and the elimination of the peoples who lived there, was probably written or heavily edited centuries later in the time of King Josiah. It was tailored to justify his claim to invade Samaria. I’m also told that Rahab’s story was written as a kind of satire, pointing out that the Israelites had long cohabited the land with other peoples.

I don’t know. There comes a point when you aren’t sure what to believe and I definitely don’t intend to write of Rahab as non-historical. I guess the question is: what parts of all this are load-bearing for my faith?

I think I have to believe in God’s greatness to overcome all darkness. He has an army. He can fight. And, whether the warmongers of humanity repent and learn his ways, or whether they don’t, he can—and will—end all wars.

There are other things I’m tempted to take away: that he is the one who commissions us, that he doesn’t set us up to fail, and that he does the things we can’t achieve on our own.

But I guess what I really want is some framework for knowing which fights are worth fighting, how to fight them, and how to know when the commission is not of my own making, but from God. Far be it from me to gold-plate my own agenda with a divine mandate.

Problem is, no fight in this life is truly “clean,” whether it involves physical combat or not. And even if I could find such a framework, I have to recognise something. Ultimately, the very skill of fighting will be made redundant. What matters is not whether we fight, or how we fight, but how we follow God.

I hope that if he opens up a space in front of me, as he did for you, that I will step into it with all the wisdom he has given me. I trust that if I don’t step forward, he will not coerce me. And I know that, whatever happens, he will be a faithful father to me.

I write to you in the hope and peace of the one whose arm is never too short to save,

Photo by Egor Kunovsky on Unsplash