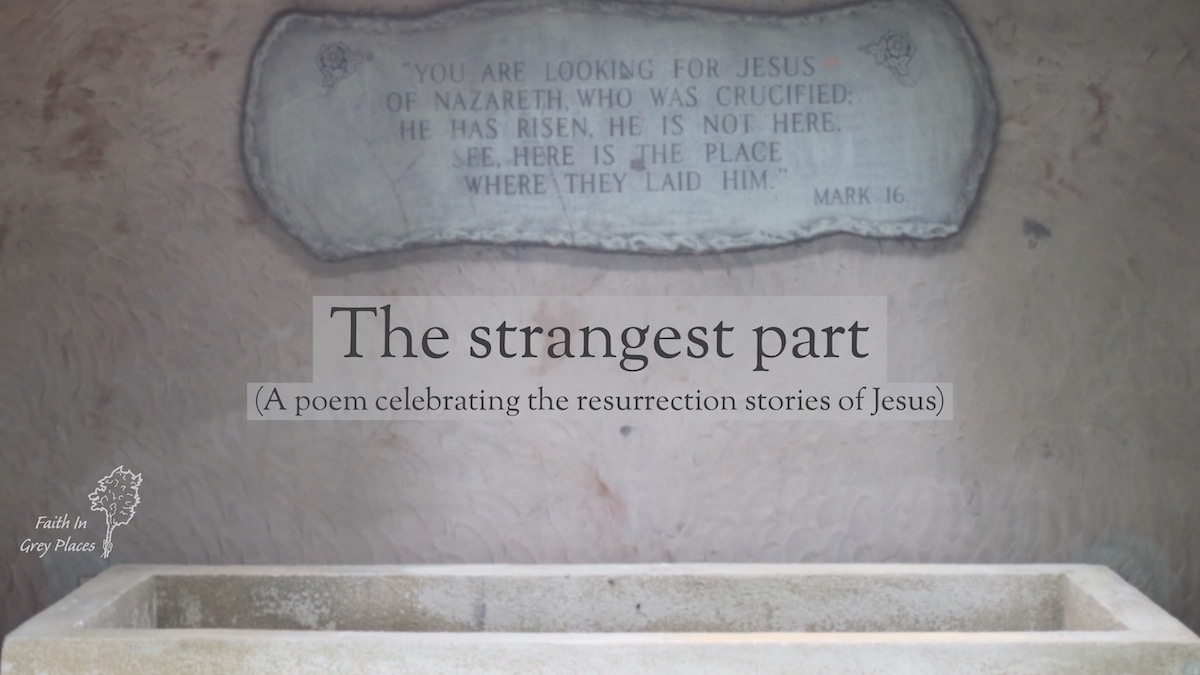 During his ministry, Jesus frequently retreated to secluded areas in order to pray. He was pulled into wearying disputes, by his disciples and the crowds. Also, by and large, he kept himself within the laws of physics – the notable exception being when he walked on water.

And the whole time he was walking a fine line between concealing and revealing who he was.

Of course, one of the strangest things about the resurrected Jesus is that people recognised him by his scars. Now I absolutely believe his resurrected body is whole and healed, even with the scars; they are a sign of his history, not a burden of his present. But I sometimes wonder if Jesus also has the marks of his flogging and the crown of thorns; to be honest, I hope he doesn’t. I would rather believe he deliberately chose to retain the marks in his hands and side, leaving behind the rest, because you know what? They’re enough. They are the testimony that he is the one who was crucified, died and rose again.

I love the idea of resurrection, not because it resets the story or erases the past, it doesn’t. Instead, it gives a life out of death; it’s about coming through all the awfulness of suffering and still having the final word. Resurrection doesn’t just restore the body, it vindicates it.

So today’s poem is a celebration of the quirkiness and profound mystery of Jesus’s resurrection.

I wrote it with the same meter as the ‘patter song’ poem I wrote during lent titled Don’t ask. Both poems are about Jesus’s identity but whilst Don’t ask is in the heat of debate in anger, this one is much more relaxed.

Well,
To begin with was an earthquake and the tombs were broken open
And the bodies of the righteous who had died were then awoken,
And the curtain in the temple tore like heaven in a vision
And we wonder, was God saying he was breaking down division?
But the strangest part was at the tomb, for early Sunday morning
Came another violent earthquake and an angel without warning
And he rolled away the stone
To show the body—it was gone!
And the angel simply said
“He is risen from the dead.”

Then we started hearing stories, people said that they had seen him,
Heard his voice and held his hands, and they were sure that it been him.
But a question still remained if one did not believe the women:
Who would steal a dead man’s corpse and choose to leave behind the linen?
Yes he sometimes walks through walls but then he has no trouble eating
And it’s still just as frustrating when his presence is so fleeting,
But his triumph is revealed
Within the scars that are now healed,
Hear the truth I have believed,
See the hope I have received.

Resurrection is one of my favourite topics so if you have appetite for further reading, I have a whole bunch of posts on my sister-site Light in Grey Places.

A four-part study series on 1 Corinthians 15 (which is all about resurrection):

Year of Hell, Remember Nothing, and The Wish: lessons on hope (one for the fans of Star Trek: Voyager, Xena: Warrior Princess, and Buffy the Vampire Slayer)

Resurrection is the vindication of the body – and the only complete answer to rape culture (this post reflects on resurrection in the context of the awful story of Jyoti Singh, who was also known as Nirbhaya).

Photo by Ann on Unsplash