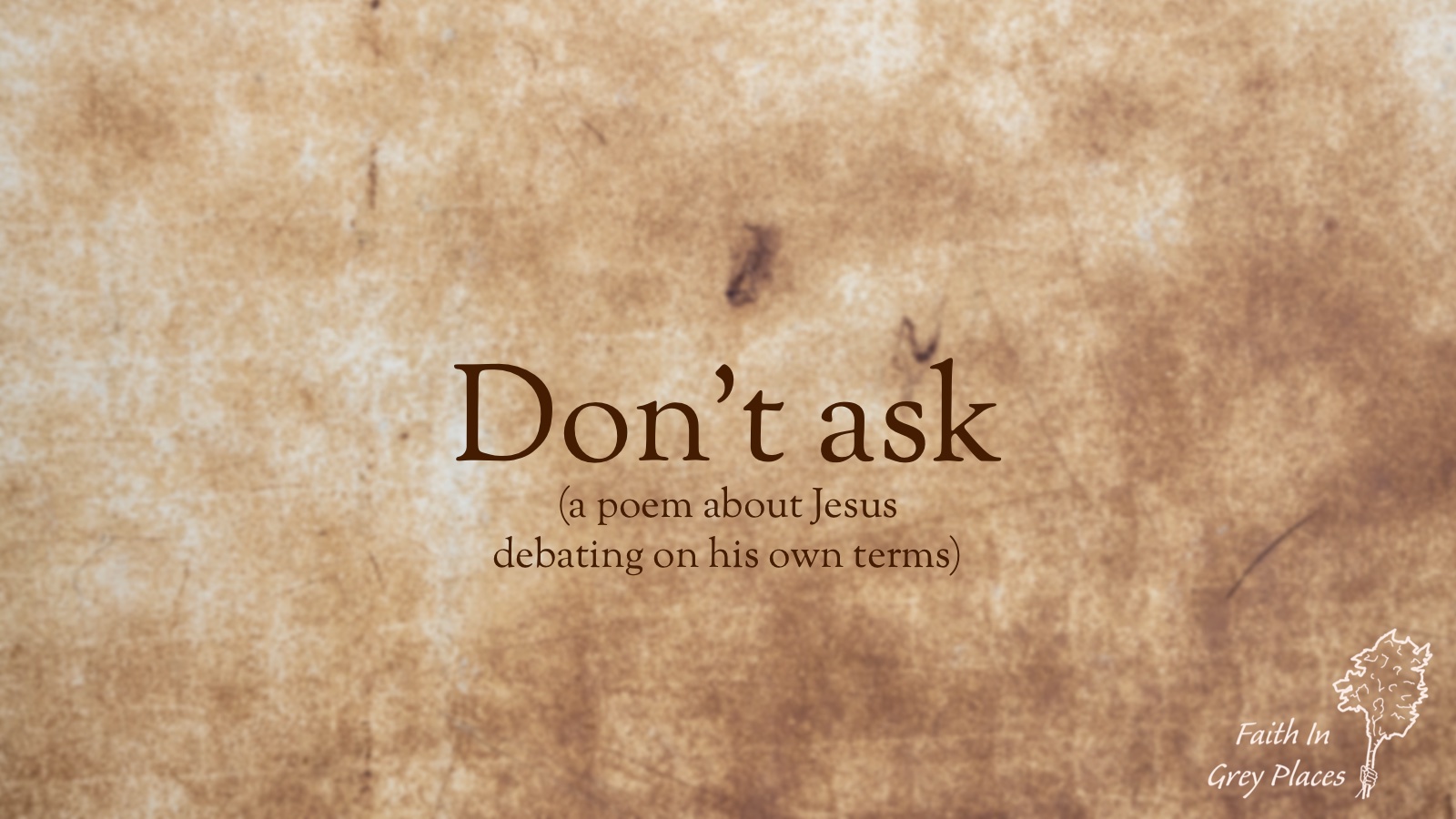 This week I wanted to explore the idea of holding your own in a debate intended to undermine you. I’m looking at it in the context in the week before Jesus’s crucifixion, when he was questioned in the temple. In particular, when he was asked by what authority he said and did the things he did.

Skip to the video or to the poem

The story is recorded in Matthew 21:23-29, Mark 11:27-33 and Luke 20:1-8. In response, Jesus threw back a question of his own: was John’s ministry of heavenly origin, or mere human origin? The chief priests and elders then debate – if they said John’s ministry was from God, they knew Jesus would ask why they didn’t believe him. But they were afraid of the crowd’s response if they said it was only human in origin. So they ducked the question. In return, Jesus said that he wouldn’t answer their question.

Jesus is a remarkable example of someone holding their boundaries – far from easy in the midst of a public, heated debate. I also love the fact that he later responded with his own question (“Whose son is the Christ?”) and it silenced them. (Matthew 22:41-46, Mark 12:35-37 and Luke 20:41-44.)

So in this poem I wanted to capture Jesus’s adamant refusal to engage on terms other than his own. It’s intended to be read at a fast pace.

Edited to add: actually… I made a short animated video of me reading it.

The video is also on my Facebook page here.

You can ask me about prayer and/or the show of public greeting,
You can ask about the sinners I’m so scandalously meeting.
You can ask about your actions, what to do to have God’s favour,
What it really is to love and who exactly is your neighbour.
You can ask me about tithing, washing, eating, drinking, fasting,
About heaven, hades, angels and the life that’s everlasting.
But don’t ask me for a sign
As if your words were not malign.
I will not indulge your hate.
I am not up for debate.

If you’re interested in some further reading, Dalaina May wrote this fabulous short article on the story of Jesus cursing the fig tree – she learned “Jesus was making a very explicit statement to the first century Jews, particularly the religious authorities, that every one of them would have understood.”

I also wrote a monologue, imagining Jesus as a 12 year-old boy, coming to terms with his identity – and how to present himself. It’s called Skandalon.

Photo by Jon Sailer on Unsplash