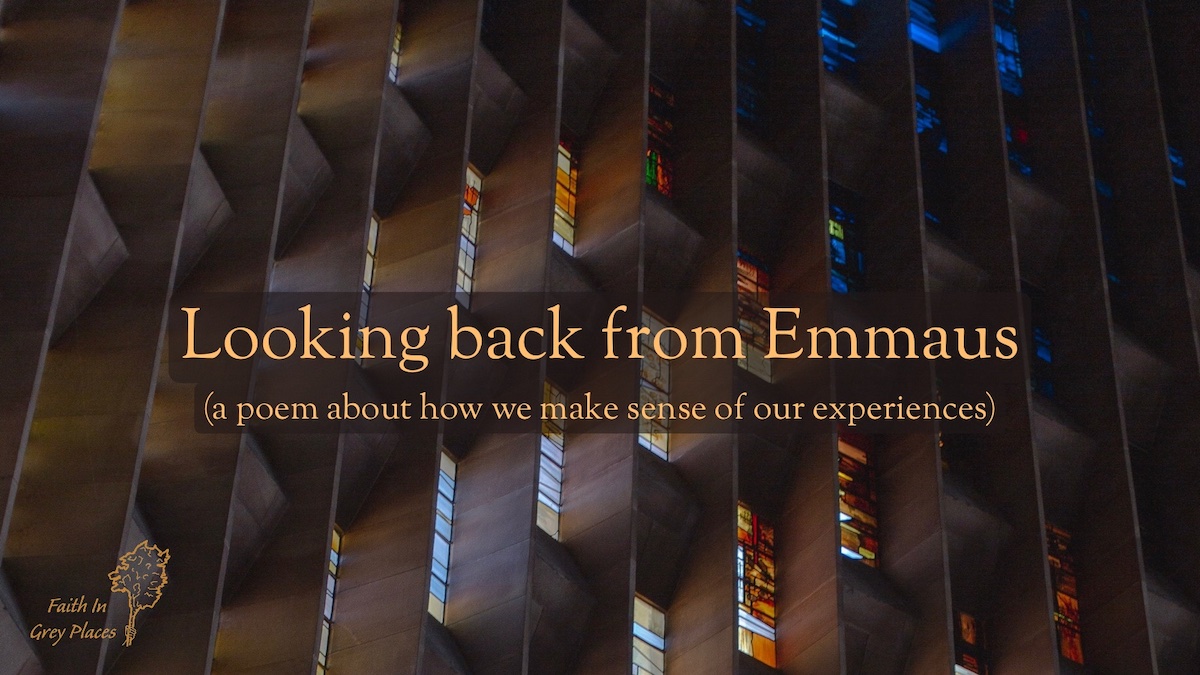 As if the title didn’t give it away, today’s poem draws on the story of when Jesus walked with two disciples along the road to Emmaus on Easter Sunday. The account is in Luke 24:13–35. They were downcast and somewhat astonished that Jesus didn’t seem to know about the crucifixion, but then Luke says they were prevented from recognising him.

Whilst they walk, Jesus is described as ‘opening’ the scriptures to them so that they could understand that the Messiah ‘had to’ suffer and die. It’s only when they reach Emmaus that they invite Jesus in to stay with them and, over a meal, recognise him for who he is.

I wanted to pick up on the idea that ‘everything happens for a reason.’ This is something I sorely want to believe much of the time, because the arbitrariness of the alternative is, frankly, quite terrifying. But I also believe that part of the awfulness of sin is its senselessness. So I’m not sure that everything does happen for a reason – even if I can see the purpose in some awful events, like Jesus’s crucifixion.

If you didn’t know, I’m preparing to study for an MA in theology this Autumn and am currently working on my pre-reading. One of the papers is by R Hays, titled Retrospective Reading: The Challenges of Gospel-Shaped Hermeneutics. What I found intriguing in reading it, was the idea that the only way to spot the unexpected patterns from the gospel narrative is to look backwards from Jesus to the Old Testament. It has to be a retrospective reading.

As I read this, it struck me that many people who say ‘everything happened for a reason’ (in the past tense) are people who are looking back on their own story. They’ve reached a point in time when their story is sufficiently developed that they can look back and see the patterns.

In contrast, saying to someone in the midst of their grief and confusion that ‘everything happens for a reason’ (in the present tense) is far less edifying. You can’t look back on events while you’re still in the midst of them. The would-be comforter cannot know if there is any sense in the events that have passed; even if there is, they cannot know if this will ever be discernible or indeed discerned within the mourner’s lifetime.

Suffice to say, I avoid using this phrase, because I don’t think it’s comforting.

But as for the gospel story, I do believe that everything with Jesus happened for a reason. And it was such a cosmos-bending reason that God took several thousand years to give us the pictures and vocabulary we needed so that, once it happened, we could understand it.

So with all that in mind, I wrote this poem.

Oh and by the way, the picture in the featured image is from the great window that curves around the font Coventry Cathedral (photo by Sam Clarke on Unsplash). I chose it because I liked how its different pieces and overall shape mean that you can only see it all when you view it from the right perspective.

Here’s a view of the window as a whole.

Photo by ian kelsall on Unsplash.

But I also chose the image because something similar happens in the structure of Coventry Cathedral as a whole.

Instead of having long straight walls at its sides, it has several sections of walls, each angled inwards towards the altar. This means that the gaps between each section – which is where the windows are – are only visible when you reach the altar and look back. You can see the effect in the main welcome picture on their website.

It seemed a fitting metaphor.

Looking back from Emmaus

He told us
everything happened for a reason.

And you know, ordinarily,
I wouldn’t have believed him.
A stranger on the road
No one we know
Not even aware
of why we were grieving.

It’s such an easy thing
To dismiss the pain,
To claim there was a reason why,
Make it make sense,
Who are you comforting really?

But this time was different.

It wasn’t that he didn’t know
Or wouldn’t reckon with
What we’d witnessed.
He saw it all.
Much like he’d seen it all
As it was happening.

And that wasn’t the strangest part.

Because he didn’t tell us that
Some day we’ll look back
And it’ll all make sense.
Rather, we could look back now.
Like everything pointed to now.
The picture was complete
If we could but see it.

Our hearts were burning inside us.

And I wonder,
If we’d met him a day sooner,
What we’d have said.
Whether we’d have welcomed him
Or asked to share bread.

But I guess,
In this at least,
Everything happened for a reason.

Photo by Sam Clarke on Unsplash