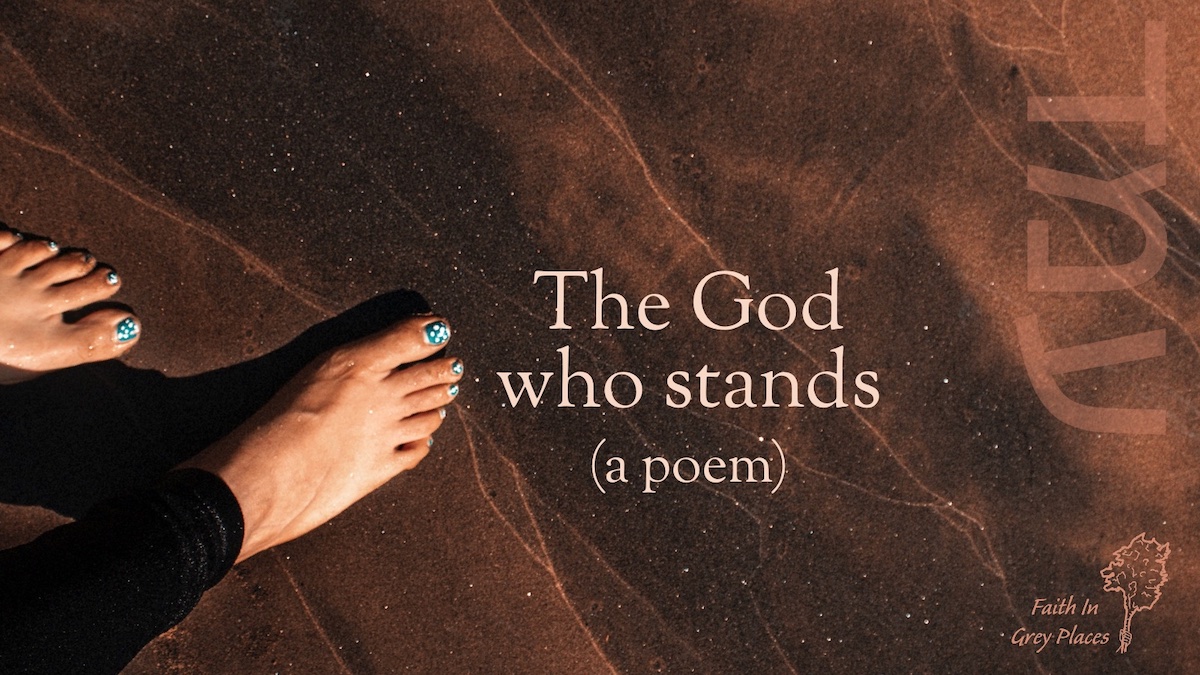 I’m back from my break and starting a new series!

The first one I’m looking at is עמד a.mad (all the ‘a’ vowels are long). It means ‘to stand’ but can also mean ‘to endure’ and has strong connotations with service and ministry. Essentially, ‘to stand before’ or ‘to stand in the presence of’ was an idiom meaning ‘to serve.’

So for example, the word is used (and sometimes verbs get used like nouns):

The big quirk is in Genesis 18. Three ‘men’ come to visit Abraham, except two are angels and one of them is the LORD. Anyway, Sarah is told that she will have a son within the next year and the LORD debates whether he should discuss with Abraham the impending judgement over Sodom and Gomorrah. In Gen 18:22, it says that the men leave to go to Sodom and Gomorrah. The Hebrew doesn’t say how many men leave, but in the next chapter we read that only two of the men go to the city.

The verse also says that Abraham remained standing before the LORD. In other words, the LORD, as the third visitor, stayed behind. Logically though, when you think about visitors coming and going, it would make more sense to say that the LORD remained while the other two left. And there is an ancient scribal tradition exactly along these lines: that the LORD remained standing before Abraham.

However, that’s problematic when you think about the idiomatic meaning of a.mad. It implies that God was subservient to Abraham, which wasn’t the case at all. It’s possible the scribes deliberately changed the text to avoid that connotation.

Another meaning of a.mad is about endurance. For example, the word is used in:

Obviously, there are lots of times when עמד / a.mad is used with its regular meaning of ‘to stand’. In Exodus 3:5 and Joshua 5:15, Moses and Joshua respectively are told to take off their sandals because where they’re standing is holy.

In 1 Kings 19:11, God tells Elijah to stand on the mountain while he passes by (though Elijah stays inside the cave and only goes out after the earthquake, wind and fire).

In Esther 4:14, עמד / a.mad is used when Mordecai says protection for the Jewish people will ‘appear’ or ‘arise’.

And what about the New Testament?

Obviously, the New Testament was written in Greek, not Hebrew. But there are several moments where you can see the Hebrew thinking behind how the verb to ‘stand’ is used.

Actually, I realised that Paul makes a fabulous play on words in Romans 14:4. In a passage about not judging other Christians, he writes:

4 Who are you to pass judgment on another’s servant? Before his own master he stands or falls. And he will stand, for the Lord is able to make him stand. (NET)

This is about both serving (standing in the presence of) and enduring.

Of course, the most triumphant uses of ‘stand’ in the New Testament refer to Jesus after the resurrection. In Acts 7:55–56, Stephen has a vision of Jesus standing at the right hand of God – not before God but at his right hand. And in Revelation 5:6, John sees the lamb (Jesus) standing at the centre of the throne in heaven.

When I first learned the word עמד I didn’t realise it would be so full of meaning, but I’ve loved studying how it is used – and I’m sure there’s much more to learn.

So that’s what I was thinking about as I wrote this poem.

One last thing: the diamond mountain

Most of my poetry draws directly from biblical imagery, but the first verse of this poem draws on something else as well.

It’s an image I heard first in an episode of Dr Who (Heaven Sent), where the Doctor quotes from the Grimm fairy tale, ‘The Shepherd Boy’. The speech goes like this:

The Brothers Grimm – lovely fellows, they’re on my darts team. According to them, there was this emperor, and he asks this shepherd’s boy, “How many seconds in eternity?” And the shepherd’s boy says, “There’s this mountain of pure diamond. It takes an hour to climb it, and an hour to go around it! Every hundred years, a little bird comes and sharpens its beak on the diamond mountain. And when the entire mountain is chiselled away, the first second of eternity will have passed!” You must think that’s a hell of a long time… Personally, I think that’s a hell of a bird.

Photo by Sandra Alekseeva on Unsplash

So here you are.

The God who stands

I stand before the God who stands
Beyond the reach of shifting sands.
Though sparrows graze upon the cliff
Until the rock becomes a rift,
Yet ageless is the one who is,
Enduring, he who ever lives.

I stand before the God who stands
With feet of flesh on earthy lands,
Upon the cloud, above the waves,
The human, holy one who saves.
Yes, he who stood at Pilate’s seat,
Now holds the world beneath his feet.

I stand because God helps me stand
And crafts the labours of my hand.
Though sparrows fall and flowers fail,
And hopes are winnowed in the gale,
I lean in him who rest is sure,
Whose grace and promise will endure.

About Genesis 18: to be clear, changing the text is pretty rare in the Hebrew Bible. Usually, the written text was preserved exactly as it was, even with obvious errors, and notes were added in the margin saying how the text should be read. These are called qere/ketiv (or QK, derived from the Hebrew words for read and write).

But if I remember right from the book I read a couple of weeks ago (this one by Ellis R. Brotzman and Eric J. Tully), there are about 20 instances where scholars think the text was changed. Another example is Job 2:9; Job’s wife tells him to curse God and then die. Except the scribe didn’t want to put ‘curse’ and ‘God’ so close to each other, so the text actually says ‘Bless God and die.’

As you can imagine, there is a whole world of textual criticism here and I’m only just beginning, so don’t quote me. But I find it fascinating.

Oh, and you know how Moses and Joshua were told to take their sandals off? The Hebrew for ‘sandal’ in Joshua 5:15 is singular and, whilst many Hebrew manuscripts have the plural in Exodus 3:5, the manuscripts of the Targum, the Septuagint and the Vulgate all have ‘sandal’ in the singular.

Photo by Tanya Dusett on Unsplash