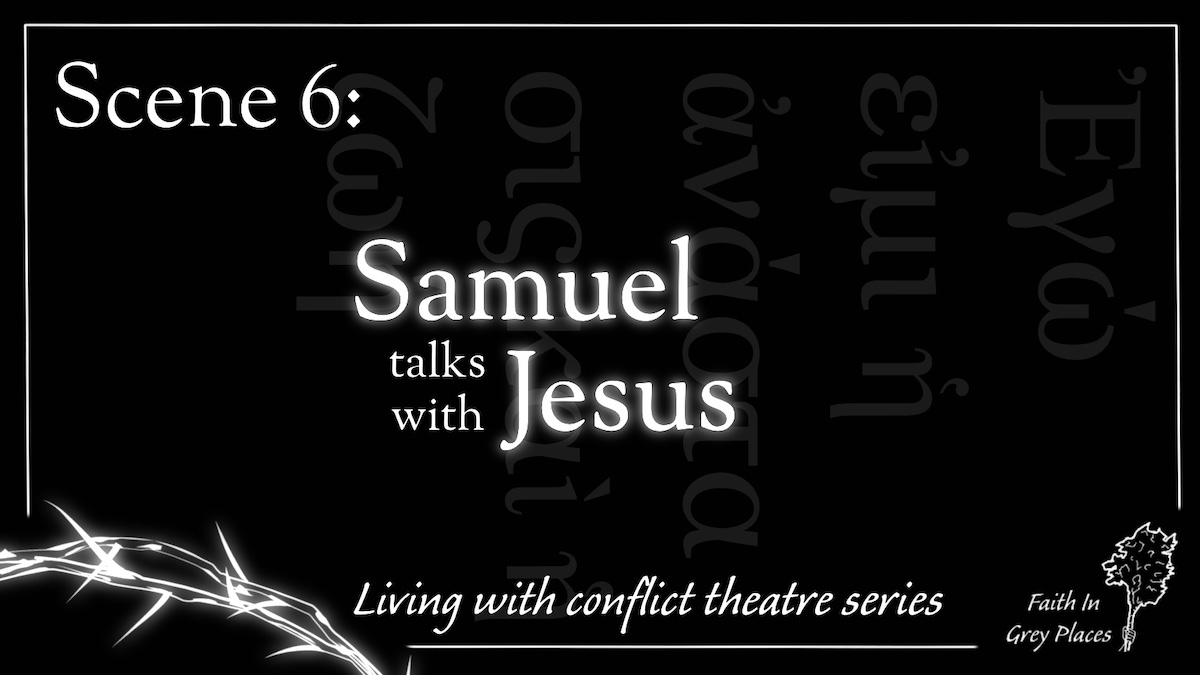 In this, the sixth and final scene, he finds himself standing with Jesus outside the Philistine city of Beth-Shan, after Saul and his sons were defeated in battle. They talk about Saul’s life, the silence of death and the dead.

This last week, I listened to a Guardian podcast titled ‘Why are so many journalists being killed in Mexico?’ It brought me back to the body and especially how bodies are treated before and after death.

For example, we learn how journalists in Mexico frequently take selfies when they’re out investigating. It’s so that if they suddenly go missing, their friends and family will know what they were wearing and it may be easier to identify their bodies.

Similarly, the Bible has grim accounts of people’s remains being treated in horrifying ways. Whilst most of these stories relate to the actions of Israel’s enemies (like the Philistines or the Romans), there is a notable one concerning David’s treatment of seven of Saul’s sons and grandsons (2 Samuel 21, and I’ve written about Rizpah’s role in Light in Grey Places).

I wanted to explore what Jesus makes of all this as someone who was marred ‘beyond human likeness’ (Isaiah 52:14) and whose dying body was put on display as a public spectacle.

I also wanted to probe into how Samuel relates to Saul. Samuel anointed Saul king, but he also rebuked Saul several times and prophesied that the kingdom would be taken from him (see 1 Samuel 13 and 1 Samuel 15). Not only that, but we also have the unusual story of Saul consulting a medium to call up the ghost of Samuel (1 Samuel 28).

So, I explore all this and more.

An excerpt from the script is below. All duologues in the series can be found here.

JESUS:
(PAUSE) If it had been your choice, would you have refused to speak to Saul?

SAMUEL:
No. I wanted to respond. (BEAT) Does that bother you?

JESUS:
Does what bother me?

SAMUEL:
That even though I was dead, I wanted to speak with Saul?

JESUS:
Samuel, death is a terrible, terrible silence. People cannot and should not look to the dead for their salvation, for the dead cannot save anyone from death. And I’m not going to commend or endorse anything that suggests otherwise. People are too valuable to be misled by that kind of lie.

But I have no love for the silence of death. And I don’t blame you for not liking it either.

SAMUEL:
They’ve taken the last body down. (BEAT) I wish it could have ended here.

JESUS:
How do you mean?

SAMUEL:
After this, there was a famine, wasn’t there? When David enquired, you said it was because of the bloodstained house of Saul. So David met with the Gibeonites and asked what they wanted by way of recourse for Saul’s crimes against them. They asked for the lives of seven of Saul’s sons and grandsons. And David handed them over, they were killed and their bodies left in the open air to rot.

Why couldn’t the story have ended here?

JESUS: It’s true that all of that happened. But that wasn’t the end of the story either.