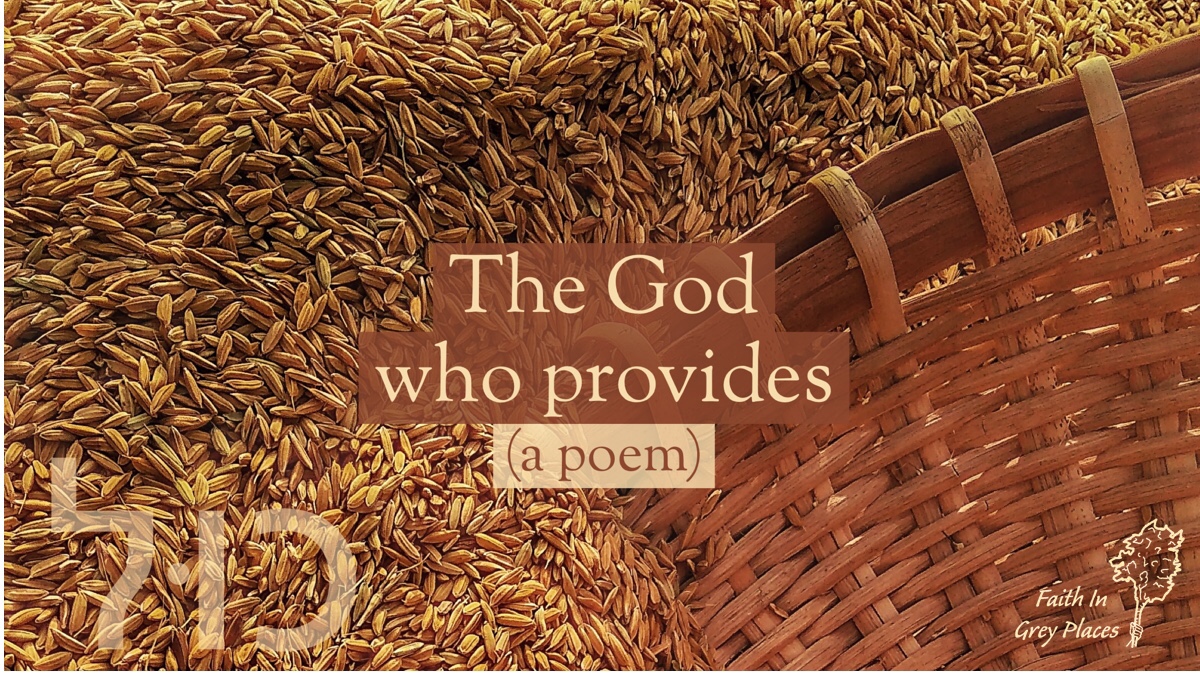 One of the texts my class looked at as part of our Hebrew module last month was 1 Kings 17. It’s the story of Elijah pronouncing a time of drought over Israel and then fleeing from King Ahab (and his wife Jezebel). In short, it’s a time of political turmoil; Ahab has been thoroughly corrupt, encouraged the worship of Baal and persecuted the prophets of God. And after delivering the bad news about the drought, Elijah flees.

When I was translating this passage, I came across this word: לְכַלְכֶּלְךָ / l’chalkelcha. Or LKLKLK. In Hebrew, the letters L and K can denote two very common prepositions – and indeed the first L is a preposition. I also knew that the last K was a second person singular suffix – in other words, “you” was the object of the verb. But I could not for the life of me figure out what this word was.

Hebrew verbs have three syllables in the root before you add on the prefixes or any extra letters to denote the tense and the stem (i.e. active voice, passive voice, intensive action etc). But whichever way you looked at it, this one was not behaving normally.

Turns out, I was looking at the Hebrew verb כוּל / kul, in the Pilpel stem. I had a moment of, “Oh you’ve got to be kidding me.” I had never encountered the Pilpel. Turns out it’s like the Piel – which is used for intensive action – but this stem is very rare.

And what does kul mean? Well, in the Pilpel, it means to provide, sustain or contain. In this sentence (1 Kings 17:4), God was saying that he had commanded the ravens to provide for “you”, meaning Elijah. God uses the same word again in 1 Kings 17:9 when he says he’s commanded a widow to provide for Elijah.

(It’s also used in the sense of ‘contain’ when Solomon dedicates the temple saying that not even all of creation could contain God (1 Kings 8:27, 2 Chronicles 6:18).)

You might be wondering if this word is used in Genesis 22. When Abraham doesn’t sacrifice his son Isaac, he finds a ram instead and names the place, “The LORD provides.” Same word? No, it’s completely different. In Genesis 22:18, the verb is much more about how God will cause to appear, or reveal. It’s about being able to see something, whereas kul is about sustenance.

As I was thinking about sustenance, I was reminded of Deuteronomy 8:13, where God says that humans don’t live by bread alone, but by everything that comes out from the mouth of the LORD. I was actually very surprised to read this. Having grown up with the song Give me oil in my lamp, I had thought that humans live by every word that comes from the mouth of God. But no, ‘word’ is not in the Hebrew. Which made me think, it’s not just that we live by the words God speaks, but also by his breath – his Spirit.

(Of course, in Matthew 4:3 Jesus quotes the Greek translation of Deuteronomy 8:3 (the Septuagint). And the Greek does include the word ‘declaration’.)

And so with all this in mind, I wrote today’s poem.

I focus a lot on the theme of food. With the current conflict in Ukraine especially, the question of supplies and logistics has been on my mind. It’s not enough to harvest the grain, you’ve got to transport it to where it’s needed.

The God who provides

Sustain me, O God,
Hold open a supply line.
Command the birds in the time of famine,
Appoint a sympathiser in the time of oppression,
For without you, I won’t survive.

Provide for me, God,
Meet me on the breadline.
Store the grain and release it each morning,
Contain the oil and renew it each evening,
For everything depends on you.

Refresh me, Lord,
When I edge at the shoreline.
Breathe your Spirit into my bones,
Nourish my body with your Word,
For then I will share your life.

Photo by Shalitha Dissanayaka on Unsplash