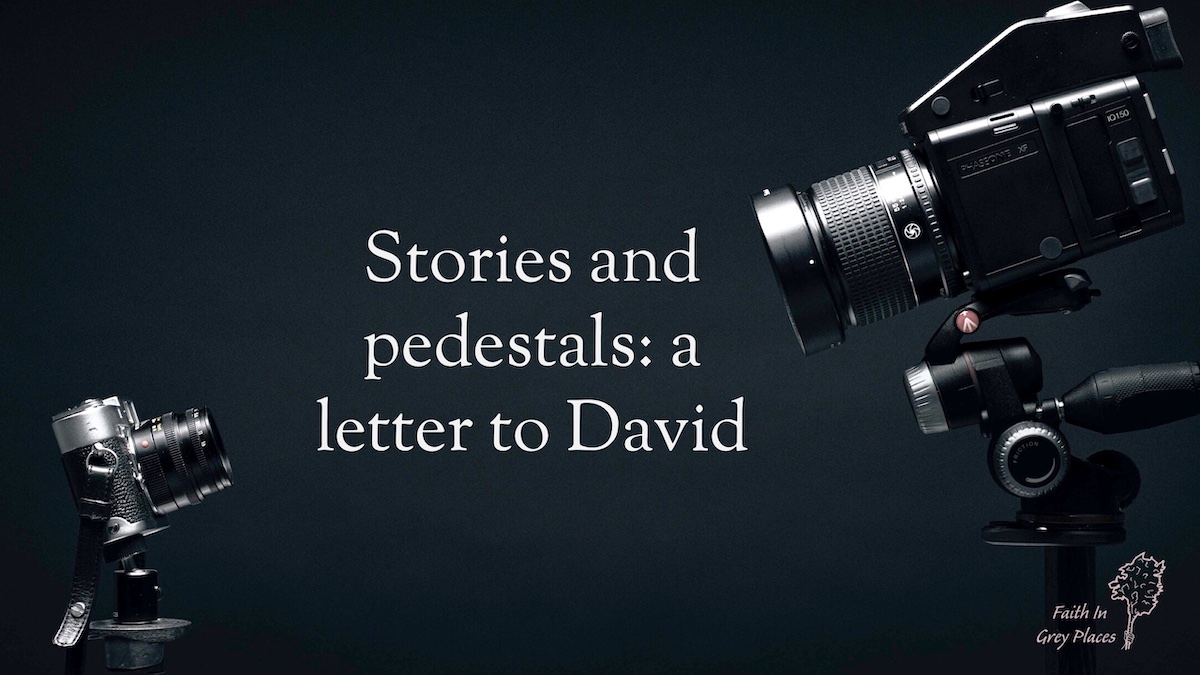 In the penultimate letter of this series, I write to David. His story is starts in 1 Samuel 16 and continues to the end of 2 Samuel.

As I summarised very briefly in my Christmas 2020 series:

With no shortage of political enemies, David came within an inch of his life several times. But he died peacefully in his old age and was remembered as Israel’s greatest king. Don’t get me wrong, he had his faults and he did some pretty terrible things – even by the standards of his time. But he was an example of someone who was humble and who sought after God’s heart. And that idea – of a good king who remembered the poor and vulnerable – never went away.

The most famous story of David’s wrongdoing is when he committed adultery with Bathsheba and murdered her husband, Uriah the Hittite by having him ‘killed in battle’. I wrote more about that as background for a liturgy I wrote for the forgiveness of bloodguilt, based on Psalm 51.

This last week, I’ve been listening to a YouTube video about pedestalling and cancel culture. It was by sci-fi geek Jessie Gender and she paid particular attention to a show creator called Joss Whedon. If you haven’t heard of him, don’t worry, I’ll explain.

In my time, we thrive on stories. I’m sure that was the way in your time too. ‘David and Goliath.’ ‘David and Jonathan.’ ‘David and Bathsheba.’ These titles are so familiar, they barely need explaining in the church. As for ‘David and Goliath,’ that one has permeated secular culture culture too. Each is a story in its own right, and yet they are mere chapters of your life.

Joss Whedon is a modern producer of stories. He made Buffy the Vampire Slayer, Angel, and Firefly. I consumed these stories in the 1990s and… well, I won’t say that I loved them, I wanted to love them. Despite how the plot and characters often frustrated me, there was something in them that I yearned for. Meanwhile, many others of my generation found Whedon’s work refreshing for its strong female characters and comparatively early representation of people of colour.

To be honest, I think his best work was a modern remake of Shakespeare’s Much Ado About Nothing. The dialogue was all sixteenth century but it felt so fluid and natural. I couldn’t get over it.

Anyway, Whedon has had a bit of a reckoning of late. More and more of the actors he worked with have come forward and described how he was bullying and even abusive towards them. Meanwhile, his wife has disclosed his marital abuse and sexual infidelities.

The thing is though, when he was recently interviewed about all this, you know what he said? ‘I think I’m one of the nicer showrunners that’s ever been.’

His words have not gone down well.

I mention Whedon because, in some ways this phrase encapsulates a lot about how many people regard you today. ‘You’re one the nicer kings that’s ever been.’ Answered quickly by, ‘Yeah, well it’s a pretty low bar’ and ‘What happened to the idea of kings being good and responsible and serving others and not abusing their positions of power?’

Recently, a woman started an online discussion asking what to make of Psalm 45. It was written by the Korahites, a love song for the king and his bride. Every commentary this woman read was drawing parallels with Jesus and the church and she was trying to figure out what it was that made her uncomfortable. It turned out her discomfort came from the idea of kingship. Because in the Bible, the archetype of a good king is, well, you. And she struggled to think of you as a good person, let alone a good king.

In her video, Jessie Gender laments how opinion has now divided over Joss Whedon. Some see him as evil and all his work worthless; others see him unfairly ‘cancelled’ and vilified by the mob. She finds this frustrating because it allows no nuance, no discussion of how and why Whedon’s work was flawed. In her view, if we can’t have a conversation about Whedon, his work and the way he worked, the same problems will repeat themselves and we will never learn. She wants to talk about both the good and the bad. She doesn’t in any way excuse Whedon’s abusive behaviour, but she can’t deny his work still had a very positive influence on her creative aspirations and those of others.

I think Jessie would be similarly unwilling to label you as either good or evil.

Interestingly, she talks about worship and idolisation. Whedon became a god-like figure who could do no wrong. Then he fell out of favour and in his own words, ‘Nobody ever fell from a pedestal into anything but a pit.’

When I read your story, I can’t help but get the feeling that everyone wanted to put you on a pedestal. Part of me wonders if that’s why Saul hated you so much—he wanted the accolades for himself. Then there’s the time you returned to Jerusalem after Absalom’s revolt: the men of Israel and Judah argued over who had the greatest share in you (2 Samuel 19:41–43).

But I’m honestly not sure you ever wanted to be idolised in this way. I get the feeling this is the one thing you resisted for much of your life. And, with the notable exceptions of Bathsheba and the census, I think you generally succeeded.

For the record, I find your response regarding Bathsheba telling. You didn’t try to diminish, deflect or deny what you’d done. I wonder if Nathan didn’t so much teach you something new, but reminded you of something you’d forgotten. Because from that point on, your humility is notable.

You didn’t complain about being a victim when your own son, Absalom, did far worse than cancel you (2 Samuel 15:1–12). You left Jerusalem because you didn’t want to put people into unnecessary conflict (2 Samuel 15:13–30). You ‘took notes’ from Joab and put aside your personal feelings for the sake of others (2 Samuel 19:1–8).

You sought to make restitution for the wrongs of your predecessor, Saul; whilst I remain deeply discomforted by what the Gibeonites asked of you, I think it says something that you gave them (as the wronged people) what they asked for (2 Samuel 21:1–14). I don’t see much of that kind of courage going around today.

You listened to your men when they said you shouldn’t go into battle with them again (2 Samuel 21:15–17). That says something about how you were willing to be there with your men in the heat of battle; you stepped back from the frontlines for their sake, not your own.

And then when you screwed up again by ordering census, you took the blame and didn’t want other people to bear the cost (2 Samuel 21:17–24).

It’s so easy to look at all that and say, ‘You were one of the nicer kings that ever was.’ I know that’s not something you ever said of yourself, but it’s the message I tend to hear in the church. I once wrote in a half-written song, ‘David’s always on brand.’

Don’t underestimate how attractive it is to defend you.

There are many reasons why you are, quite literally, on a pedestal in Rome.

Oh, I want to be real about what you did with Bathsheba, and why it was rape (and murder). But I also know the story didn’t end there. And, for myself, I don’t believe you raped her when she conceived Solomon.

So, are you the hero or the villain? Because no one wants to say neither or both.

At the end of the day, I think Jessie has it right. It doesn’t matter whether you were or weren’t one of the nicer kings that ever lived. What matters is what we can learn from you and your story if we give it the nuance it deserves. Because we still want to know what makes a good king.

I write to you in the peace and hope of the one whose light will shine forever,

If you want to read some more, I would recommend the Psalm 51 liturgy. I once had the privilege of using this in a service about racial justice and it was an incredibly moving experience.

On Light in Grey Places, I wrote about David and the Gibeonites in a post about Rizpah and her protest against David. I’ve also analysed the Hebrew words used for David’s adultery and whether they implied Bathsheba’s consent (answer: no).

Photo by Florian Klauer on Unsplash