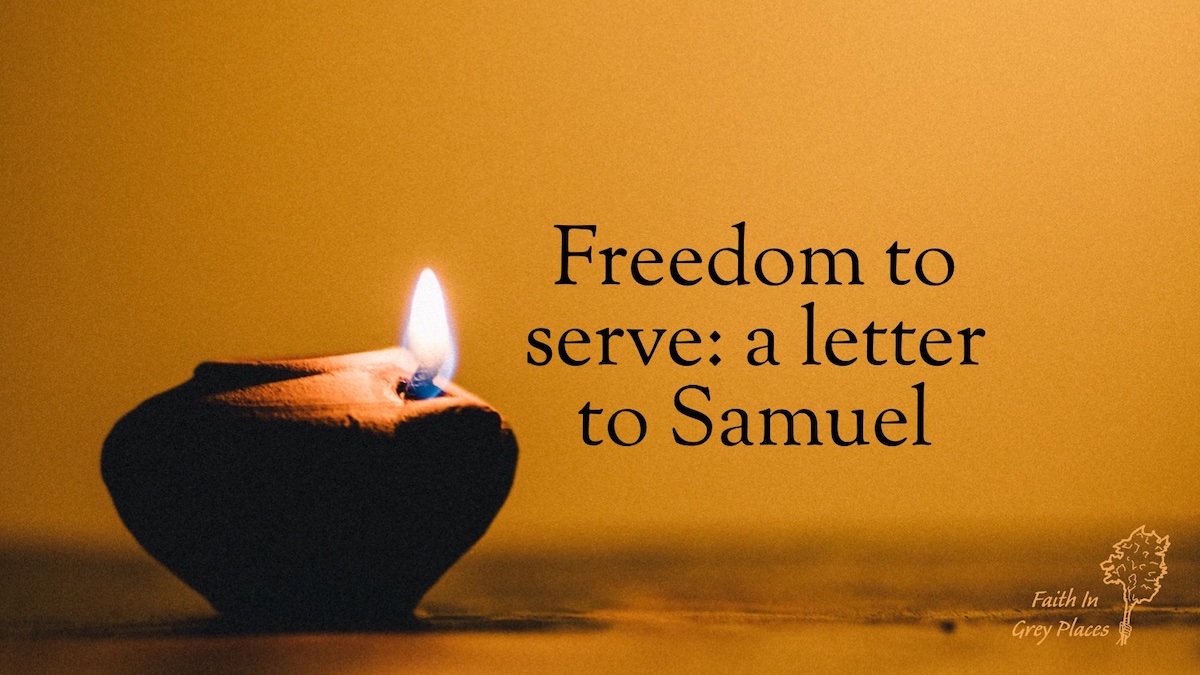 With today’s letter I come to the end of my series on the great ‘cloud of witnesses’. It has very much surprised me, especially in the last few weeks as I’ve worked my way through the judges of Israel.

The story of Samuel’s birth is recorded in 1 Samuel chapters 1 and 2. His mother Hannah had been barren and when she conceived, she sang a victory song of praise which almost certainly served as inspiration for Mary when she conceived Jesus.

Samuel ministered in the house of the LORD, which at that time would have been a tent, not a temple. His calling as a boy is in 1 Samuel 3. We then don’t hear much about him until 1 Samuel 7 where he helps Israel defeat the Philistines.

Samuel is mentioned in the list of the cloud of witnesses in Hebrews 11, but was also lauded as a faithful servant of God in Psalm 99:6 and by Jeremiah (Jeremiah 15:1). Peter also says Samuel foretold the days of the Holy Spirit in his speech in Acts 3.

I have nothing but admiration and respect for you.

For me, you’re the high point in Israel’s pre-exilic history. It’s not that no other leader’s biblical record is as clean as yours; it’s that all the other leaders with your word count made catastrophic mistakes. Even the good ones.

I know that the biblical account is very brief and I don’t understand why some stories are included and others not. (I don’t even know what stories were left out!) So, I don’t for a minute think that you were without sin. But still… you did so much good, for so many people, over your whole lifetime. I find something so refreshing about your example.

The story of God calling you as a child has become a classic. I certainly heard it when I was young. I love your childlike trust, your obedience, your willingness to listen. The idea of childhood innocence is a bit of a cliché, but… there is something so lovely in how you were unafraid and didn’t need to analyse your experience. You didn’t need any grain of scepticism as you heard God’s voice. You just… listened.

And it always seemed like a bit of a shock to hear what God had to say to you. You were a boy and yet he gave you a message of judgement. To me, it always felt like God wasn’t playing by the rules. And I wan’t impressed that Eli effectively threatened you to get you to disclose the prophecy. For goodness’ sake — you were a child!

That said, I’m glad that you were able to learn about the harshness of this world without being harmed by it.

There aren’t many accounts of children in the Bible. We have Miriam, who negotiated a rescue deal for her baby brother Moses. We have the young girl from Israel, who became the slave of Naaman’s wife. There’s also the son of the woman from Shunem and Jairus’ daughter—both of whom died and were miraculously resurrected. Plus the boy who offered his five loaves and two fish. And Jesus. And you.

It took me a long time to realise how much these stories impacted me. On one level I saw nothing to stop me from identifying with you as a child, sleeping in the house of the LORD. Talk about life goals. That was the dream. With your story (as well as others) I internalised the inclusion of children as precious and special in God’s sight.

But on another level I noticed something else without even realising it. Leaving out the children who died, all the boys were free and all the girls were slaves.

I know that this handful of stories is hardly a representative sample. But even so, the representation holds power that I didn’t appreciate until I was grown up. It took me a long time to realise that, even though you were probably the one biblical character I most aspired to be like (Jesus doesn’t count for these purposes), I didn’t believe I could be. On some level, I thought that anything I achieved would have to be from a place of marginalisation.

Now, I doubt I could have picked up this message from the biblical stories alone. More likely, it came in combination with the wider cultural messaging I absorbed growing up. But you know, it saddened me when I realised it was there at all.

I get that God operates in the margins and this strength is made perfect in weakness. But I don’t believe the structures of his kingdom are meant to be this way. This should not be the norm amongst his people.

I love the fact that you served in the house of the LORD, even though you weren’t from the family of Aaron.

I don’t really have very much to say. I love your honesty as a child, your humility as a religious leader, your resoluteness as a military leader, and your faithfulness throughout.

You started and finished well, and have been an inspiration for many who follow after you.

I write to you in the peace and hope of the one who calls us by name,

Photo by Gadiel Lazcano on Unsplash