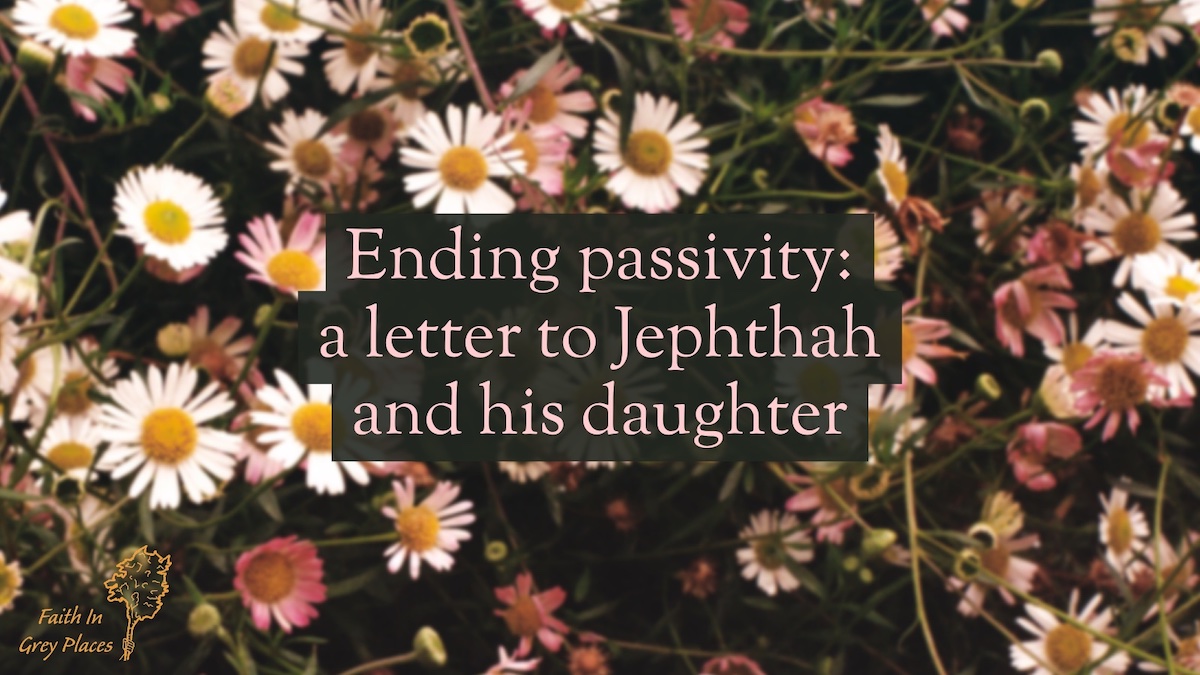 Today I write to Jephthah and his daughter. Theirs is a heart-wrenching story and you can read it in Judges 10:17–12:7.

To give some context on the geography here: Gilead was a region on the east of the river Jordan, about midway between the Sea of Galilee and the Dead Sea. The area of land referred to by the name ‘Gilead’ varies in the biblical literature, but the region here is more restricted.

The region ruled by the king of Ammon was a little farther east—largely overlapping with modern day Amman. There’s a handy map on the Study Light website that shows you the areas.

Gilead had previously been occupied by the Amorites, but they were routed by the Israelites as part of the conquest of Canaan. The story is recorded in Numbers 21:21–31. The Israelites asked to pass through peacefully, but the Amorite king refused and waged war. And lost.

So: Gilead is where Jephthah came from. He was driven some distance away to Tob in the north-east, but then came back when the king of Amon started making (westward) incursions into Gilead. The Ammonite king wanted to occupy the stretch of land that went east to the River Jordan, south to the Arnon river and north to the Jabbok river.

These are all marked on the Study Light map.

So, Jephthah told the Ammonite king that this patch of land was never his, and Jephthah wasn’t going to hand it back.

Meanwhile, the Ephraimites, who were fellow Israelites, lived west of the Jordan. So, when they crossed the Jordan to complain that Jephthah hadn’t involved them (Judges 12:1–7), they were going from the west side to the east side. When they waged war, Jephthah captured the Jordan crossing points and cut the Ephraimites off from going back.

Hopefully, this gives you a better idea of the geography.

There is much that could be said about internal conflicts and ‘shibboleths’ but today I’ve stayed focused on the story of Jephthah and his daughter.

In short, before he embarked on his campaign, Jephthah took an oath to sacrifice the first thing or person (grammar unclear) that came out of his front door to greet him. In the event, his daughter, also his only child, greeted him. When he explained his oath, she asked for two months to lament with her friends the fact that she would never marry. Then she came back and the text strongly implies that Jephthah sacrificed her.

I’m indebted to my friend Dalaina May for her essay on Jephthah’s daughter. I quote some of what she wrote further down and link to her post, but meanwhile, she shared an image that I found so poignant. It’s by Kevin Rolly on Deviantart.

I still remember reading your story when I was a teenager. And reading the bit where you took your oath to sacrifice the first thing that greeted you if you returned home victorious. At the time I thought to myself, ‘That’s pretty rash!’ but in my naivete, I thought things would work out OK.

And then they didn’t.

So often, I find myself watching or reading stories, where unnecessary tension is injected meaninglessly into the plot. Your oath felt like that. There was no need for it. You had called on God to decide between you and the king of Ammon. You were convinced that the LORD was greater than their god Chemosh. So, why throw an ‘if you do xyz’ oath into the mix? Why not just follow through and make a thanksgiving offering afterwards?

Maybe you’ve been asking yourself that same question in the years since.

I’ve often wondered why God didn’t somehow thwart or circumvent your oath. I’m sure he does this, more often than we realise. So why didn’t he on this occasion?

I’ve been learning about Hebrew stems recently and how the verb to swear שבע appears mainly in the Nifal stem, the passive voice. In other words, the grammar carries the overtones of an action done to people, rather than something that people do. To me, this conjures the idea that an oath is something bigger than you, and that binds you.

And of course, the same word is used to mean promise.

But there’s something so hollow about how oaths can be used. Instead of being made in piety, they can be made in theatricality. They’re like a declaration. And the bottom line isn’t about ethics, it’s about being right. In that light, it’s kind of no wonder that Jesus told his followers not to swear at all.

In your time though, it seems oaths were considered unbreakable and irrevocable. Not even your daughter urged you to break yours.

It’s for that reason, that I’ve always taken comfort in the book of Numbers. There’s this series of laws in Numbers 30 about when oaths are binding on women. It’s often read as evidence of patriarchal bias in ancient Israel and the idea that men get to decide for women. But whilst that was a social component of the law, we shouldn’t miss the theology. Namely, that God has the authority to release people from oaths.

I often wondered if it ever occurred to you to ask to be released from your oath.

I’m not in any way glad about the manner of your daughter’s death. But there are still things in your story that I am glad about.

I’m glad that God didn’t undermine your military campaign simply on account of your oath. I’m glad that he is not bound by the ill-advised things we say.

I’m also glad that, well, the consequences of your oath didn’t fall on someone that no one thought was important enough to remember. English translations differ in Judges 11:31. The NKJV records you as saying that ‘whatever’ comes out of your front door will be the LORD’s and that you will sacrifice ‘it’ as a burnt offering. The NET translates it as ‘whoever’ and ‘he’. Of course, in a language such as Hebrew, with masculine and feminine nouns, it is often hard to differentiate between ‘it’ and ‘he’.

But it begs the question—were you just thinking of an animal, or would you have been perfectly willing to sacrifice a servant in your own household?

And for that reason, I’m kind of glad it wasn’t nobody who came to meet you. The whole thing was a tragedy, but because it was your daughter, the tragedy was felt and remembered. It comforts me, because it reminds me of how God won’t allow the nameless, faceless and voiceless to be forgotten.

On a separate note, I’m sorry that you were treated so badly by your family. I always feel this ache reading your story; you were driven away and yet were able to come back and make a name for yourself. And then you lost all prospects of having descendants of your own. Gosh, I feel you.

And in that context, I’m glad that your name is remembered as an example of faith, someone whom the Holy Spirit empowered. It wasn’t just the author of Hebrews who spoke about you, but Samuel did as well. And Samuel never wasted words.

I hope you have found a way to forgive yourself for what you did.

Not too long ago, I read a book about the story of when God tested Abraham and asked him to sacrifice Isaac. The book argued that the climax of Genesis 22 was not the binding of Isaac, but the unbinding. I’m reminded of it as I write to you. Without denying the tragedy and tears of you and your daughter, I believe the climax of both your stories will also be found in the unbinding.

And that comforts me.

I write to you in the peace and hope of the one who loosed his only beloved son from the pains of death,

I’m sorry that I don’t know your name, only your father’s.

I just wanted to say that I admire your courage.

A friend of mine works with trafficking victims in Indonesia, especially Bali. Her charity is called Dark Bali. She wrote some wonderful things about you and I wanted to share them.

In the population of commercially exploited children that I work with, the majority will never escape with their lives and freedom. But I cannot believe that God does not still redeem and dignify their stories. He does. He is that big; He is that good. …

Jephthah’s daughter’s story provides a powerful testimony of God’s ability to redeem even when he does not rescue. There is a shocking hope where there should be none. Through her story we learn that in honoring the memories of the ones never rescued by naming the truth of their tragedies, the kingdom of God moves forward.

Upon realizing her fate, Jephthah’s daughter responds with stunning dignity. She requests two months to spend with her friends mourning the coming reality, mourning their collective powerlessness to stop what is happening. It is an intriguing response that begs for reflection. Caregivers of exploited children can feel a sense of solidarity with the friends’ bittersweet resolution to stay with Jephthah’s daughter all the way to her death. They could not change what was, but they could ensure that she knew that she was not alone, that she was loved, valued, and esteemed. They could remind her that she did not deserve what was happening to her and that they would never forget. This too is part of our work.

I write to you in the peace and hope of the one who will be with us, even to the end of this age,

Photo by Jade Stephens on Unsplash