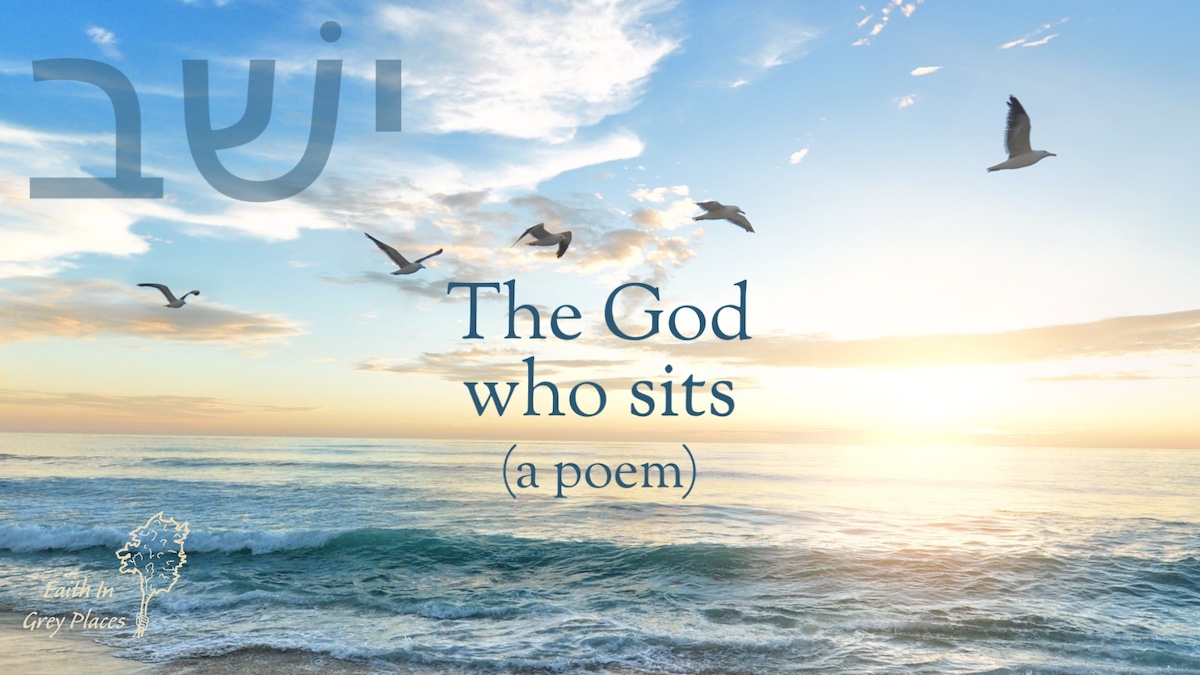 A few weeks ago, I sat down to map out which Hebrew verbs I would write poems on for the remaining weeks of this 12-part series. They had to be words I’d learned over the last year and, obviously, not the same as the verbs I’d already covered. So far, we’ve had poems on stand, provide, shine, build, give voice, create, cease [rest] and form; the remaining weeks were to be: sit, dwell, appoint, reign.

There was, however, a slight flaw in this plan.

The Hebrew verb ‘to sit’ (ישׁב / yashav) is the same as the verb ‘to dwell.’ In my head, I’d confused ישׁב / yashav with the verb to lie down שׁכב / shakav, and I only realised this after I’d written this week’s poem.

What we have then, is something that largely focusses on the idea of God being seated, and where he sits, but without any resonance with where he dwells. I’m undecided whether I’ll write another poem focussed on dwelling, or just choose another verb to make up the 12. We shall see.

Meanwhile, here are a few background thoughts about God sitting:

For me the classic verse is in the commissioning of Isaiah in Isaiah 6:1: “I saw the Lord sitting on a throne, high and lifted up, and the train of His robe filled the temple.” (NKJV) The idea of God being seated conjures the idea of him being enthroned and surrounded by the hosts of heaven.

The other classic verse is Daniel 7:9: “As I looked, ‘thrones were set in place, and the Ancient of Days took his seat.’” (NIV) It’s the image of a judge taking his seat to review all the cases before him and render judgements. And there is something wonderful about this thought that fills me with anticipation.

The last image I couldn’t shake is from the Anglican communion liturgy, just before Holy Communion:

Most merciful Lord,
your love compels us to come in.
Our hands were unclean,
our hearts were unprepared;
we were not fit
even to eat the crumbs from under your table.
But you, Lord, are the God of our salvation,
and share your bread with sinners.
So cleanse and feed us
with the precious body and blood of your Son,
that he may live in us and we in him;
and that we, with the whole company of Christ,
may sit and eat in your kingdom.
Amen.

God is also our host.

David famously wrote in Psalm 23:5 that God prepares a table before him. Psalm 78:19 recalls the days in the wilderness when the people asked, “Can God prepare a table in the wilderness?” There are numerous Old Testament stories of kings inviting people to eat at their table.

The table for Holy Communion is called ‘the Lord’s table’ and for good reason. The point here is that God, as king, invites us to sit and eat at his table. Which is pretty incredible.

It’s easy to think of rulers sitting and being very static and possibly not very competent. In this poem, I wanted to find a way to get past those associations. Because the fact that God is the one who sits on the throne of heaven should be source of immense comfort.

The God who sits

Did you know, there is a throne
High above this wandering world?
From there is seen every land, city, street,
From the greatest to the least.

Did you know, there is a seat
Surrounded by the great and good?
From there are words of wisdom, justice, truth,
To be proclaimed to all the earth.

Did you know, there is a chair
In place of honour for the feast?
From there, the table long and wide extends
And many invitations sent.

And did you know, the one who sits
Majestic to reign, to rule, to host,
Is worthy of every praise and acclaim,
And willing to give his grace and love.

Photo by frank mckenna on Unsplash