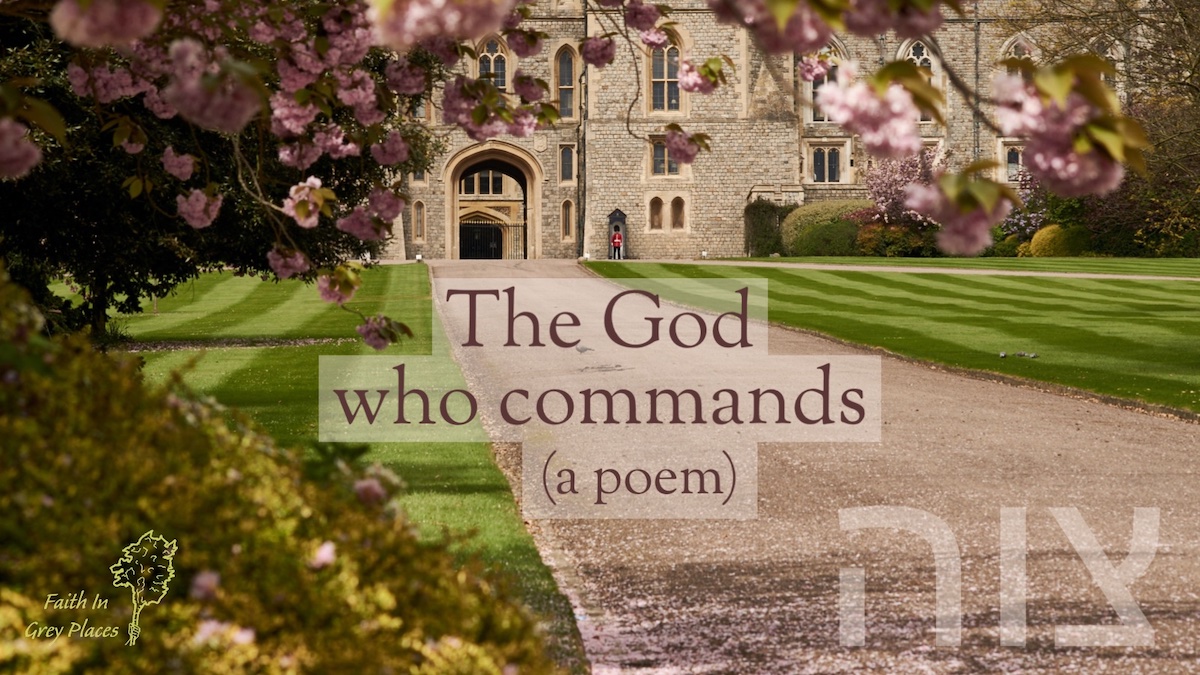 Another busy week, another poem that almost refused to be written.

But no prizes for guessing some of the thoughts behind this one.

The verb צוה / tsavah means ‘to command, charge, give orders, lay charge, give charge to, order’. It sometimes gets used to mean ‘appoint’ or ‘ordain.’ It gets used a lot in the Old Testament.

The idea of divine appointment isn’t one I find easy to explain, but I can’t shake it off either.

Dieu et mon droit has been the motto of British kings and queens (outside Scotland) since Henry V. I first encountered “God and my right” as I learned about Henry VIII, and wasn’t exactly thrilled by it. To me, it spoke entitlement. That said, I’m told the French motto is really about being monarch by the grace of God. And that I certainly believe.

Whatever one makes of the British monarchy, or Her Majesty Queen Elizabeth II, there is no doubt that our late sovereign saw her role as not a right, but a duty bestowed upon her.

There were a couple of other Bible verses in the back of my minds as I wrote today’s poem.

You may remember from one of the earlier poems in this series, that one of the texts we studied in my recent Hebrew module was 1 Kings 17. It’s when Elijah is fed by ravens, and then later by a widow in Zarephath. In verses 4 and 9, God tells Elijah that he has “commanded” the ravens and then a widow to provide for him.

And, this week at least, it reminded me of Horatio’s words to Hamlet, borrowing words from the catholic burial mass, that “flights of angels sing thee to thy rest.”

The God who commands

I’m not surprised
That the life well-lived
Is one where command
meant something.

I’m not surprised
That the life well-led
Bore their charge
In solemnity.

I’m not surprised,
Though sometimes I wonder,
The commander in charge
Is sovereign.

That at his word
Seasons and nations
Wax and wane.

No, what surprises me
Is that he commands
Monarch and widow alike.
And his angels concerning both.

Photo by JJ Jordan on Unsplash