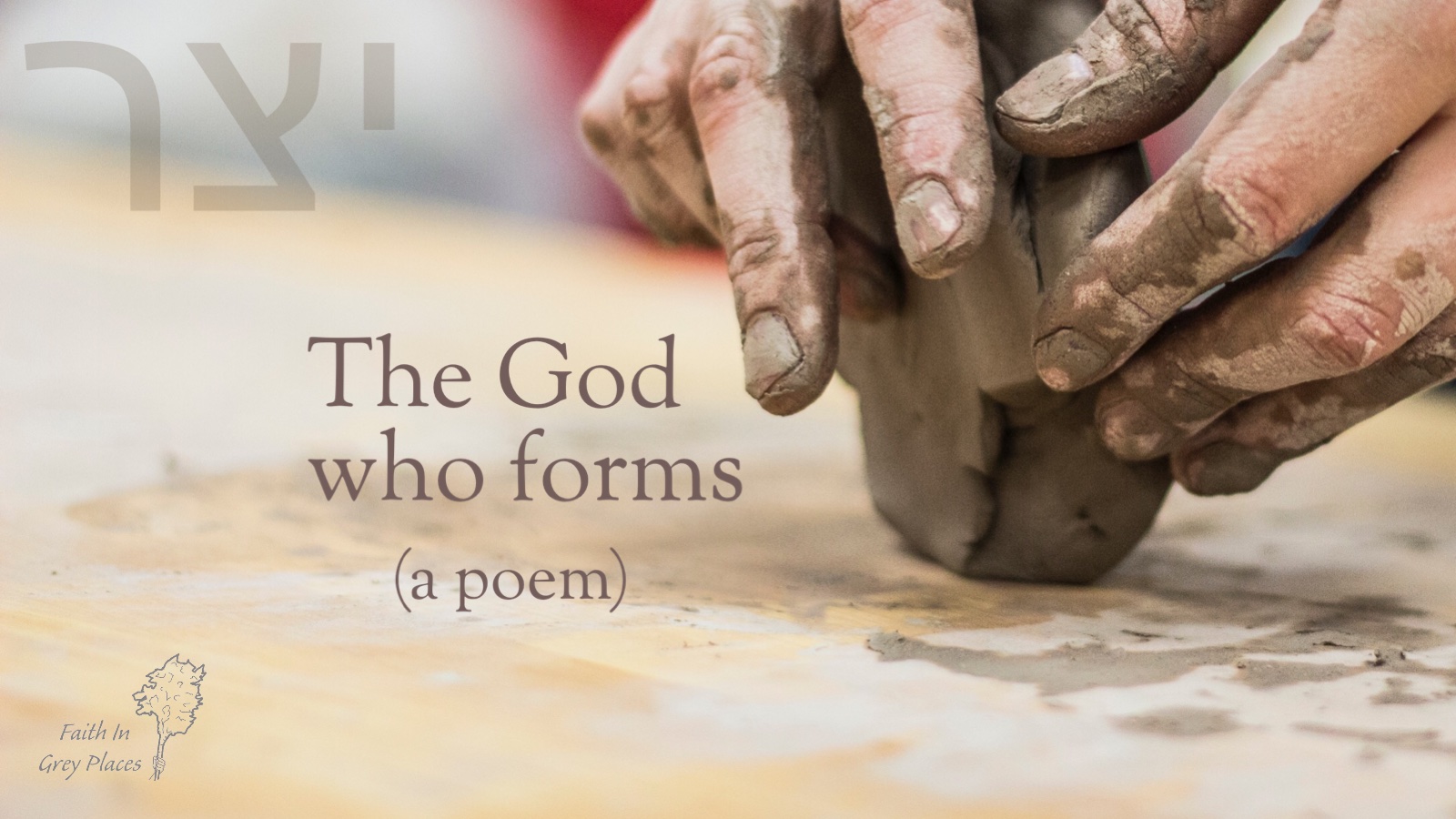 Yes, it’s Monday. It’s also a bank holiday here in the UK and so I decided not to pressure myself into sending out something yesterday.

But if I’m honest, the real reason is that this poem was really hard to write. It’s based on the verb יצר / yatsar, which means to “form” or to “shape.” In many ways it’s a concrete version of the verb ברא / bara which means to “create” and which I wrote a poem about a few weeks ago (available here).

To me, the verb conjures all associations of craftsmanship: planning, design, assembling, and most of all, shaping. I’m sure it’s no coincidence that the nouns for “clay” and “potter” share the same root as יצר / yatsar.

So what was so hard to write? Well, on the one hand I wanted to celebrate how God shapes us and the world and history itself, but on the other hand, I couldn’t get over easy it is for things to be damaged. I couldn’t figure out how to write about the loveliness in the things that God forms, when the first casualty of wear, tear and overloading is often a thing’s shapeliness.

And I think there’s a part of me that just aches at the thought of things (and people) being misshaped.

With all that, I found myself veering towards lament, even though I wanted to write a poem of praise. At the same time though, I couldn’t write praise with words I didn’t feel were honest.

Along the way, I was reminded of the words of Julian of Norwich in Revelations of Divine Love:

And in this he showed me a little thing, the quantity of a hazel nut, lying in the palm of my hand, as it seemed. And it was as round as any ball. I looked upon it with the eye of my understanding, and thought, ‘What may this be?’ And it was answered generally thus, ‘It is all that is made.’ I marveled how it might last, for I thought it might suddenly have fallen to nothing for littleness. And I was answered in my understanding: It lasts and ever shall, for God loves it. And so have all things their beginning by the love of God.

In this little thing I saw three properties. The first is that God made it. The second that God loves it. And the third, that God keeps it.

Her words reminded me that we need not be separated from the one who formed us. And if we are with him, than he can hold and protect us and, if needs be, repair and renew us.

In writing this poem, I was also reminded of William Blake’s The Tyger. It’s from his songs of innocence and experience and is the counterpart to his poem The Lamb. When I write, I like to jot down lots of words associated with the theme; the process gets me to thinking more imaginatively. In this case I was thinking about manufacture and making things and I couldn’t help but remember Blake’s words:

What the hammer? what the chain,
In what furnace was thy brain?

It’s like the tiger was created in a blacksmith’s forge.

You could argue David did the same thing in the Psalms, just using a different image:

You wove me together in my mother’s womb.

The hymns I was thinking of were from Charles Wesley’s Let earth and heaven combine (“He laid his glory by, /And wrapped him in our clay;”) and Henry Francis Lyte’s Praise my soul the king of heaven (“Fatherlike he tends and spares us; /well our feeble frame he knows.”)

The God who forms

Sometimes it seems so strange to say
That God would choose to work with clay,
That he would craft such little things
From such a fragile, brittle means.
Yet he finds dance within the art
Of shaping each and every part,
And he delights his work to see:
Its lively curves and symmetry.

He does not fear a crack or break
Be it by malice or mistake,
For he who formed our feeble frame,
The LORD Almighty is his name.
He holds and mends and tends his wares
‘Til all his love and strength is theirs.

Photo by Alex Jones on Unsplash