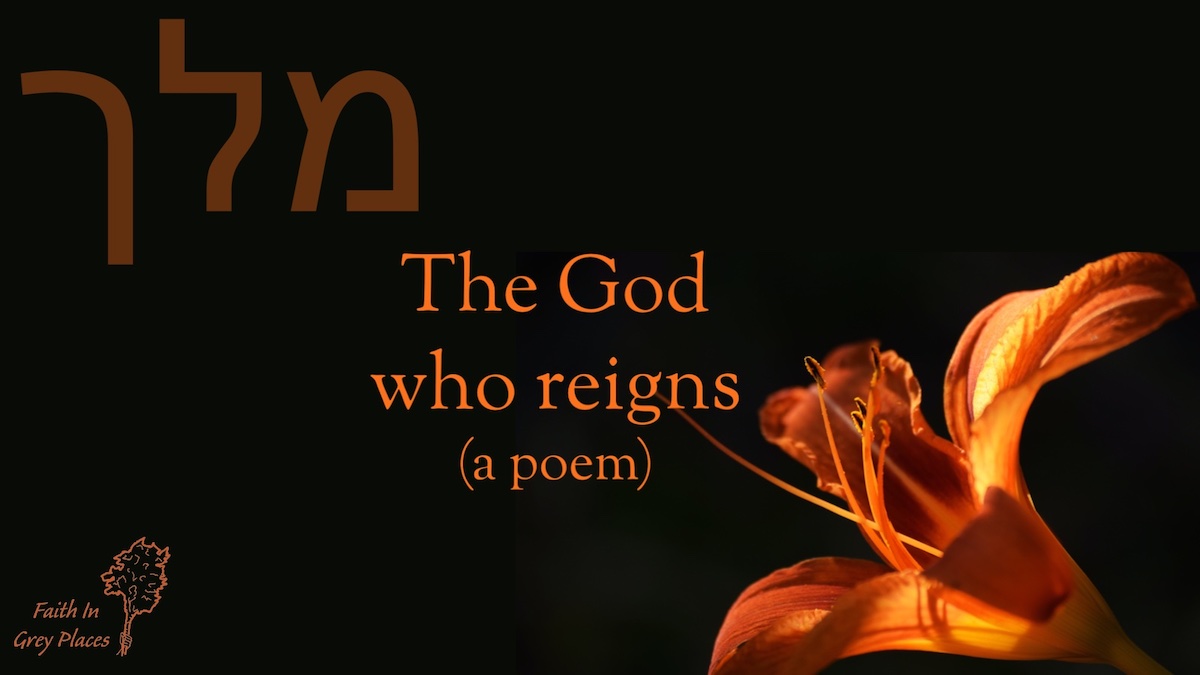 So this is the last post in this series! Today’s word is מָלַךְ / malakh which means to reign.

It’s very much like one of the very first the Hebrew words I learned, מֶלֶךְ / melekh, which means ‘king’. Hence the Old Testament names Abimelech (‘my father is king’), Melchizedek (‘king of righteousness’) and Malchijah (‘my king is YHWH’).

As you go through the history books of the Old Testament and the years of the monarchy, there’s a common refrain that echoes this one from 1 Kings 11:43:

Solomon reigned in Jerusalem over all Israel forty years. Then Solomon rested with his fathers, and was buried in the City of David his father. And Rehoboam his son reigned in his place. (NKJV)

The formula states the length of the king’s reign, then says that the king ‘rested with his fathers,’ and then names his successor.

And this is one of the times where there’s a word play in English that doesn’t exist in the Hebrew.

The phrase ‘Solomon rested’ is literally ‘Solomon lay down’; the verb is שׁכב / shakav (it’s the one I confused with ישׁב / yashav a few weeks ago). The NET translates this dynamically as ‘Solomon passed away,’ which is fair enough, but in English ‘rested’ also works as it carries the connotations of ‘rest in peace.’

But of course, the English word ‘rest’ is also used of God on the seventh day when God ceased from his work. As you’ll know from my earlier poem, The God who ceases, the Hebrew word in Genesis means ‘to cease’ more than it means ‘to rest.’ That said, in Hebrews 4, the author talks about a ‘Sabbath rest’ for the people of God and how we should strive to enter God’s rest.

So although there are two different verbs in Hebrew, ‘to lie down’ and ‘to cease,’ we have one word in the English: ‘to rest.’

I thought for today’s poem I would play on this idea and celebrate the reign of Jesus. After all, he didn’t become king after his father’s death.

So here you are. All poems in this series are also listed here.

The God who reigns

In the former days
Kings would reign
And their years were counted
Until they rested
With their fathers.

In the days before,
The shroud of earth and stone
Proclaimed each successor
To assume the throne.

And the days came
Again and again;
Accession, reign
and passing on.

But in these latter days
There is one
Who received his crown
In the moment of life,
When he broke the seal of death.

And when the days have come
That all the world
Knows his name
And his enemies are no more,
He will do what none
Before him has done:
He will rest with his Father,
Forever.

Photo by Chris Barbalis on Unsplash