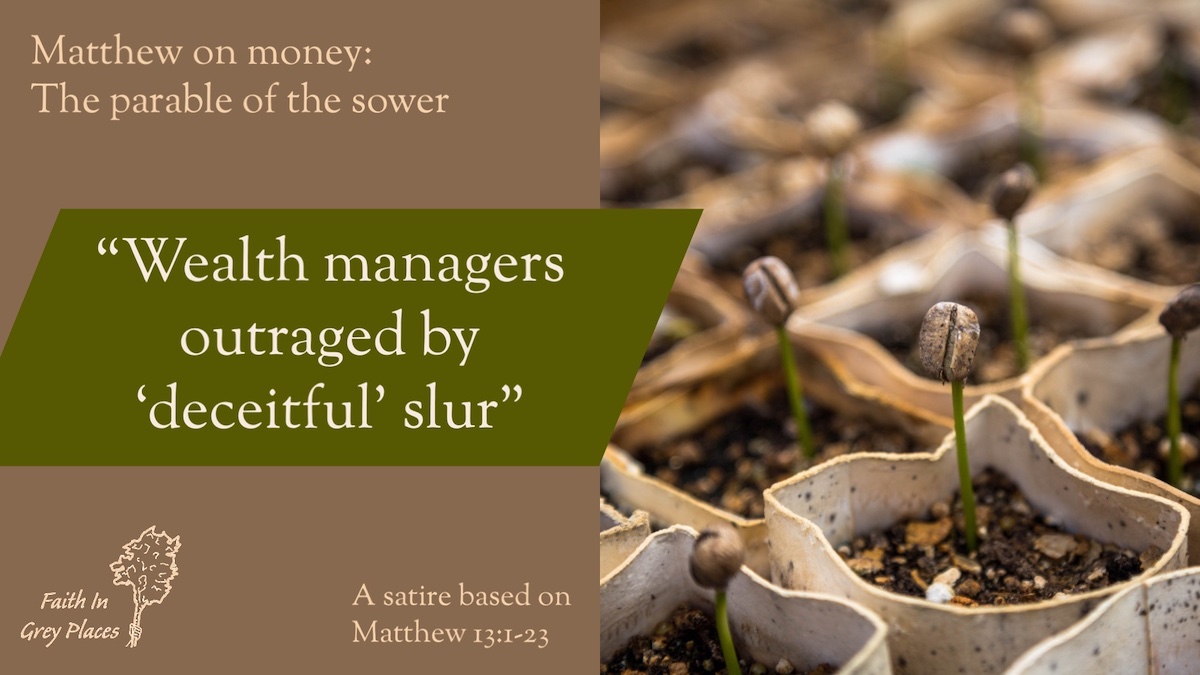 As I was finishing the last series for Faith in Grey Places, I began to think the next one would look at Matthew’s gospel in some way. Then as the news-feed scrolled on I thought maybe this was a time to write about money.

According to The Infographic Bible by Karen Sawrey, money is the fourth most-frequently preached on topic of Jesus’ teaching [p148-151]. The top three being the kingdom of God, the Father, and faith.

So I had a dig through Matthew’s gospel and pulled out some of the passages where he talks about money. It was easy to decide which passage to write about first, but deciding what to write was hard. And this is part of the reason why my two-week break from posting ended up being four-weeks.

Last weekend I tried to write a poem, but the words didn’t come. Historically when this has happened, it’s because I’ve been trying to write the wrong thing. This time, I knew I was on the right subject, but a nagging suspicion told me I needed a different genre.

Gradually the idea of writing an advert or a news article took shape. Something that you might call satirical. Then I had a title. Then the creative juices started flowing.

It comes as no surprise that I’ve been reading a lot of news articles over the last month. After a disastrous ‘mini-budget’, Britain has suffered a sharp decline in its currency, a near-collapse of its pensions, and a spike in mortgage interest rates. And this was all on top of spiralling energy costs.

For me personally, there’s the added dimension of our house move. My husband and I are fortunate enough to own our own home, and this was our first time selling a house. When dealing with very large sums of money, I find it hard not to be somewhat preoccupied. These are big decisions and transactions. And yes, in the last few weeks, I’ve spent a lot of time thinking about how not to get this wrong.

So much so, I wondered about the seed that fell among thorns in Jesus’ parable of the sower.

When I first saw this parable listed as making a statement about money, I was confused. But the link is right there in Matthew 13:22:

The seed falling among the thorns refers to someone who hears the word, but the worries of this life and the deceitfulness of wealth choke the word, making it unfruitful. (NIVUK)

Was I getting sucked in by the deceitfulness of wealth? I sat with this question for a long time.

After a while, I came to two conclusions.

Firstly, we don’t always get a choice over our bandwidth. Life events can subsume us and often that’s just a reflection of the world we live in, not our own personal moral failings. Yes, we have choices about how we respond to those times, but feeling wrung out isn’t a sign that you’re in this part of Jesus’ parable.

Secondly, we’re not the seed. The seed is the word. Yes, sometimes life events can suffocate us, and undoubtedly that’s a horrible experience, but the real question is whether God’s word within us is being choked.

Something the Holy Spirit has been saying to me over the last few weeks is from 2 Corinthians 12:19: “My grace is sufficient for you.” God can handle the vagaries of the world.

In context, Paul was writing about a ‘thorn’ in his flesh, which he described as a ‘messenger’ of Satan. Having asked God to take it away, God replied that his grace was sufficient for Paul and his power made perfect in weakness.

I don’t always know what to make of this passage, but it was interesting to note some parallels with the parable of the sower.

First, there’s the image of the thorn. But you also have the idea of a message. Ultimately, the seed in Jesus’ parable, the word, is a message. And it makes to think of the thorns as another message. Albeit a deceitful one.

So let’s take this back to finances. Whilst I have no doubt that money will be made redundant in the life to come, it is used to serve many varied functions in this life – both good and bad. As we consider this snippet from Jesus’ parable of the sower, perhaps the focus should be less on money itself but on what we say about money, and what we think money says about us.

I’m not sure if all the posts in this series will be satires, but that’s the best word I have to describe this one.

Hedge fund managers have reacted with fury at the suggestion that wealth is “deceitful.”

The controversy arose when freelance preacher, Jesus, told a seemingly innocuous story about a sower sowing seed. On the surface, it sounded like an investment advert ‘Your capital is risk,’ followed by, ‘You can reap big rewards!’ But an inside source has revealed the true intent behind this short story.

‘It was the bit about the seed falling among thorns,’ our source said. ‘In public, Jesus was talking farming 101. But in private, he said the thorns represented the “cares of this life” and “the deceitfulness of wealth.”’

It’s not the first time Jesus has given peculiar financial advice, having previously told his listeners to store up treasure ‘in heaven’ instead of the more practical place of right here, right now. But this parable seems to be the first time he’s said that wealth might be bad for your health. Using an evocative and familiar image, Jesus spoke about thorns ‘choking’ good seed, so that it even when it sprouted, it didn’t produce any grain.

Savvi Gurrus from Mustard & Olive Wealth Managers said Jesus was living in some kind of “fantasy land.” ‘How exactly is wealth deceitful? Wealth will house you, feed you and clothe you. How is that bad?’ His colleague Megas Muggus was equally unimpressed: ‘This idea of thorns is inflammatory. Thorns don’t choke people. Unless you’re stupid enough to eat them.’

Some in the crowds were more receptive to Jesus’ message. One person, who asked remain anonymous, said, ‘It’s so typical for the haves to put themselves at the centre of everything. Grow up. You’re not the seed and you’re not the sower.’

Another, was more sceptical. ‘To begin with, I thought Jesus might be saying that if lies and anxiety have roots in your life then the truth – you know, the good seed – won’t get very far. But then I thought about it some more and I realised that if Jesus had wanted to say that, he’d have just said it. So now I have no idea what it means.’

When approached for comment, one of Jesus’ followers said, ‘Look, I understand some of the scribes and teachers don’t like what Jesus says, but who on earth are these “hedge fund managers”?’

Photo by Christian Joudrey on Unsplash