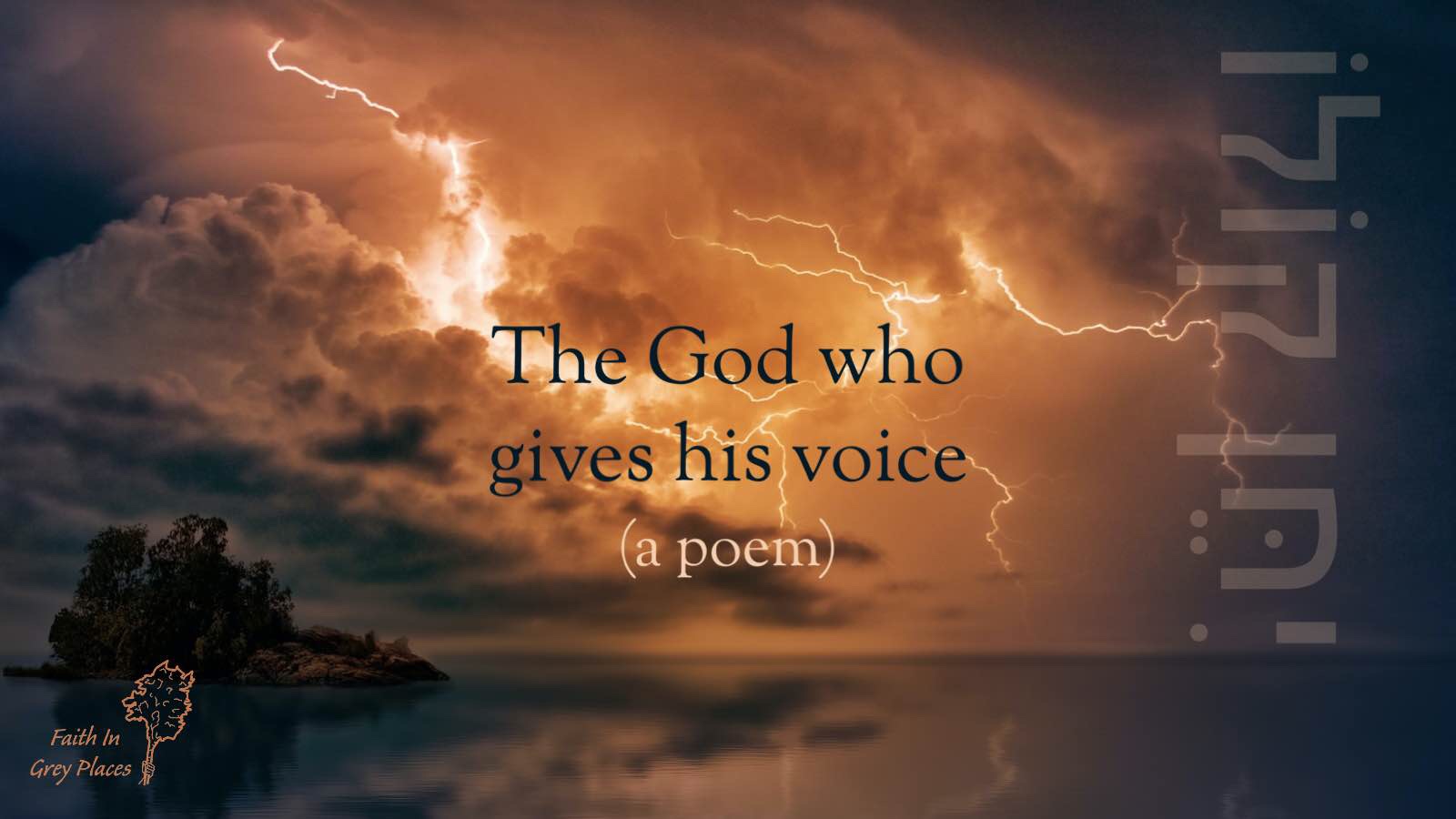 As you might have guessed, I’ve worked with verbs that I’ve already encountered in my studies. This week, I’m sort-of cheating by using a phrase: he gave his voice. Several reasons for this.

First, the verbs ‘to speak’ and ‘to give’ are both ridiculously common; I feel like I need something more specific. Second, the verb ‘declares’, as in ‘Thus declares the LORD’ isn’t a verb. It’s a noun. The Hebrew literally means, ‘declaration of the LORD’.

Third, and probably most importantly, I encountered the phrase ‘he gave his voice’ in Jeremiah 25:30 (one of our study texts).

It’s an interesting phrase used in judgement prophecies and translated as ‘thunders’ in the NIV (Ps 68:33, Jer 10:13, Jer 25:30, Jer 51:16, Joel 2:11, Joel 3:16, Am 1:2). When God gives his voice, creation trembles. Whilst this image is sometimes used to instil fear (like in Amos) it can also be one of comfort (like in Joel) — because ultimately God is coming to bring justice and establish his reign as king.

I won’t pretend the images are all easy reading. They might be difficult for people who’ve struggled with ideas of ‘angry, shouty’ God in the Old Testament, or who’ve been exposed to graphic images associated with ‘rapture theology’. That’s not where I’m trying to go with this. Rather, for me the idea of God giving his voice and creation trembling in response, is one that conjures awe. There’s a thrill and a tension in it, but not terror. Because God is for me, not against me.

And this is another reason I wanted to write about God giving his voice: in the whole of the Hebrew Bible, maybe the whole of the Bible, there is only one reference to God singing: Zep 3:17 ‘He will rejoice over you with singing.’ In contrast, there are numerous times when the biblical authors exhort the people to sing about God, his justice and his coming reign.

So today, I’ve riffed on the theme of sound. Because God giving his voice is probably the closest the Bible gets to God turning up the bass.

PS ‘Arpeggiation’ is a synthetic sound effect where the notes of a particular chord are added to the note actually being played, and added notes are played spread out and with diminishing volume.

The God who gives his voice

Clouds assemble,
And furtive whispers
Skate across the waters.
Ripples of readiness.
A tremor arpeggiates
In the diaphragm of the deep.

Then you give your voice.

Thunder erupts and the heavens reverb
Like a shattering nerve
To the base of the earth.

Oceans vibrate and the mountains resound
As the rumble rebounds
In the curve of the ground.

Brace the barometer, open the scrolls
As his justice unrolls
From the prints of his soles.

Give him your voice, call out, “God, my God, why?”
For the cords of your cry
He will now satisfy.

Photo by Johannes Plenio on Unsplash