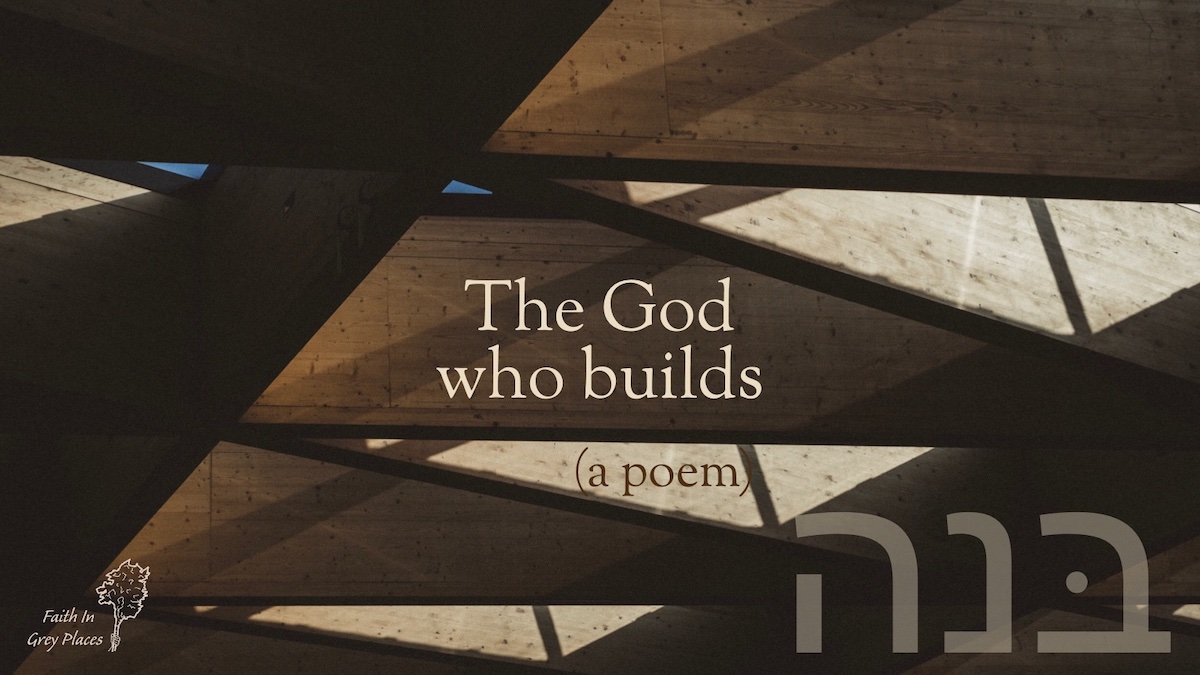 This week I’ve chosen to write on the Hebrew verb בּנה / banah (the ‘a’ vowels are both long). I became curious about this verb because it reminds me of the Hebrew word for son: בֵּן / bein. It was almost as if there was an association between building up one’s house and having sons.

Now, I don’t know if there is an etymological relationship between the two words, but בּנה / banah is definitely used to refer to women having sons and thus building a family line. Sarai uses it in Genesis 16:2, Leah in Genesis 30:3 and, at the end of the book of Ruth, the townspeople refer to both Leah and Rachel building up the house of Israel (Ruth 4:11).

(Though of course, Bilhah and Zilpah did that too. Also, when the word ‘son’ is used in the construct form to mean ‘son of’ the vowels change and the word becomes בֶּן / ben. Hence the name ‘Benjamin’ which means ‘son of my right hand.’)

The verb banah is used throughout the Old Testament, particularly to refer to people building altars, houses, cities and, of course, the temple.

I found it curious because there is much emphasis in the Old Testament about things that people build, even though these buildings have their shortcomings (cf Isaiah 66:1). However, of far greater theological significance are the things that God builds.

In the Psalms you also have the famous verse: Unless the LORD builds a house, its builders labour over it in vain (Psalm 127:1). Similarly, in Proverbs, you have Wisdom building her house (Proverbs 9:1) and the saying that a house is built by wisdom (Proverbs 24:3).

And of course there’s Paul and the author of Hebrews.

Paul writes to the church in Corinth contrasting the frailty of our bodies now to the strength the resurrection bodies that God will give us in the future. Hence, though we each live in a ‘tent’ now, “we have a building from God, an eternal house in heaven, not built by human hands.” (2 Corinthians 5:1). The implication is that this ‘house’, this resurrection body, will be one that lasts forever.

(In case you missed it, I also had this verse in mind over Easter when I wrote a poem for Passiontide ‘This is my tent’ and another for Easter season, ‘This is my body’.)

Similarly, in Hebrews 3:4, the author says that God is the builder of everything and in Hebrews 11:10, that the new Jerusalem will have God as its architect and builder.

So anyway, I started jotting down a few notes for today’s poem that could riff on the themes of what we build, what we build on, and what we build with—and the subsequent promise of reward through long hot days. Which probably reflects the heatwave we’re currently experiencing in the UK.

But then I quickly gave up and decided to write something that was more relevant to where I’m personally at right now.

You see, I’m in the process of moving house. Our new house is being built. Things are still up in the air and everything is under a lot of pressure. And right now, the thing I really want to pray about is not so much what I can build for God, but what he can build for me.

And whilst I do think it’s important to keep our focus on God (not ourselves), there is a sense in which the good news is not about what we do for God, but what he does for us.

Oh – one last thing. ‘Wainscoting’ is wooden panelling that comes up to waist height around a room. I found this word as I was scrolling through RhymeZone and it reminded me of how the cedar panelling was the final finish on the temple (1 Kings 6:9, contrast against Haggai 1:4).

The God who builds

Please build me, Lord, a house of joy
Where I can cradle afternoons,
Where sunlight warms the paving stones
And garden colour daily blooms.

Lay steady walls on solid ground
With strengthened beams and floors,
Then join it fast so it will bear
The weight of all your wisdom stores.

Frame generous and spacious rooms
Hospitable to each one’s needs,
Enlarge its windows to the light
And let its doors be ways of peace.

Wainscot its walls with splendored love,
And crown it with your gracious name,
For if you build it, I will dwell
And live a life of endless praise.

Photo by Ehud Neuhaus on Unsplash