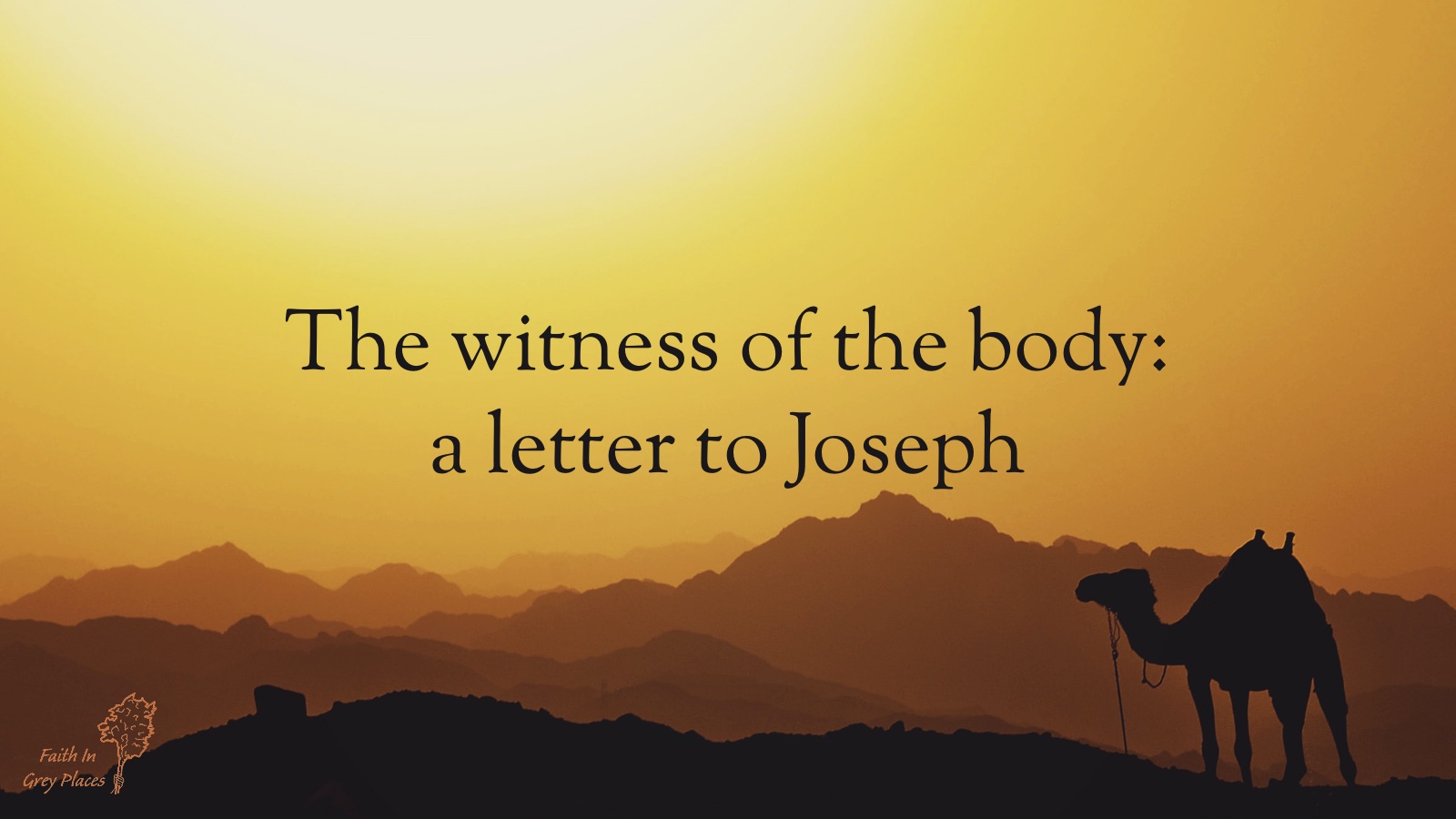 This is part of the series of letters I’m writing to people listed in Hebrews 11 as the “cloud of witnesses” who went before us. This one is to Joseph.

Joseph had a very eventful life. It’s the subject of Genesis 41–50. Although his brothers sold him as a slave, he ended up in Egypt and rose to power just in time to manage a famine. He reconciled with his brothers and then his whole family came to live in Egypt. When Jacob/Israel died, Joseph led a large entourage to bury him with his wife, father and grandfather. Curiously, Joseph didn’t ask for the same thing when he died. Well, not in the same way: he asked for his bones to be taken back to Canaan when God came to his people.

And that’s what I focus on in this letter.

By faith Joseph, at the end of his life, mentioned the exodus of the sons of Israel and gave instructions about his burial.

When I read the story of the end of your life, the thing that strikes me most is the durability of your bones. When you died, they remained—and with them the memory not just of you, but of your final words: that God would surely come.

You could have asked to be buried with Jacob shortly after you died. No one would have refused your wishes; they’d have made the journey in full procession and ceremony. So the fact that you didn’t ask for that is quite something.

You bound up your resting place with the rest that God had promised to give your people. If you’d just been concerned for yourself, I don’t think you would have done that. Instead, you cared about the future of your people, the children and the children’s children of your brothers—much like how you promised to take care of them after Jacob died. And I guess you were willing for them to safeguard your body and bones because you trusted the promise God had given.

I wonder how your descendants felt as the years passed and their plight worsened. Whether they wondered if you’d been prophetic or just naïve. And I guess this is what I’m getting at when I talk about the durability of your bones. For as long as your body was in Egypt, it testified to your faith. It made a statement to those who came after you that they couldn’t ignore or forget.

I like to think it was a symbol of hope to them as they waited. So that, in the darkest of moments, when they perhaps didn’t believe God would come, they could not let go of how you had believed. And they could not bring themselves to dishonour your last request.

When I was at university, I commissioned a friend who’s a potter to make a plate and chalice for sharing holy communion. (I’m guessing you know what that is by now.) The first evening we broke bread my best friend prophesied about where the plate would end up—on a white mantelpiece somewhere. It would be broken, but only because of all the good that God would be doing in that place.

My uni days were a time of great daring, when I wasn’t afraid to pray for miracles and I saw a fair few. So my friend’s prophecy was par for the course at the time. Since then though, I’ve grown up a bit; my life has meandered in all kinds of unexpected ways and, well, I’m not as bold as I used to be.

But I still have the chalice and the plate; though I sometimes wonder whether my friend’s words will be fulfilled, I’m not letting go of them any time soon.

So I guess it’s good to be reminded of your story: how your bones stayed in Egypt until the time of the Exodus, that God did come, and you were taken to your resting place.

As I think about it, I want to be like those who carried your bones. And in some senses, the very act of communion is just that: a carrying of the body of Christ as we wait for his return.

Many have drawn parallels between your story and that of Jesus and will probably continue to do so in the years ahead. Though I like how your words to your brothers were a fitting summary of both your life and Jesus’s: “As for you, you meant to harm me, but God intended it for a good purpose, so he could preserve the lives of many people, as you can see this day.” Amen.

I write to you in the peace and hope of the one who came to us and who will come to us again.

The potter who made the chalice and plate is Andrew Hazelden. His current pottery is in Berkshire (in the UK). His website is here.

As regards my university years, I explored the emotion of being bold and then not so bold in one of my Easter poems. If you missed it, or want to read it again, it’s on this blog here.

Photo by Mariam Soliman on Unsplash