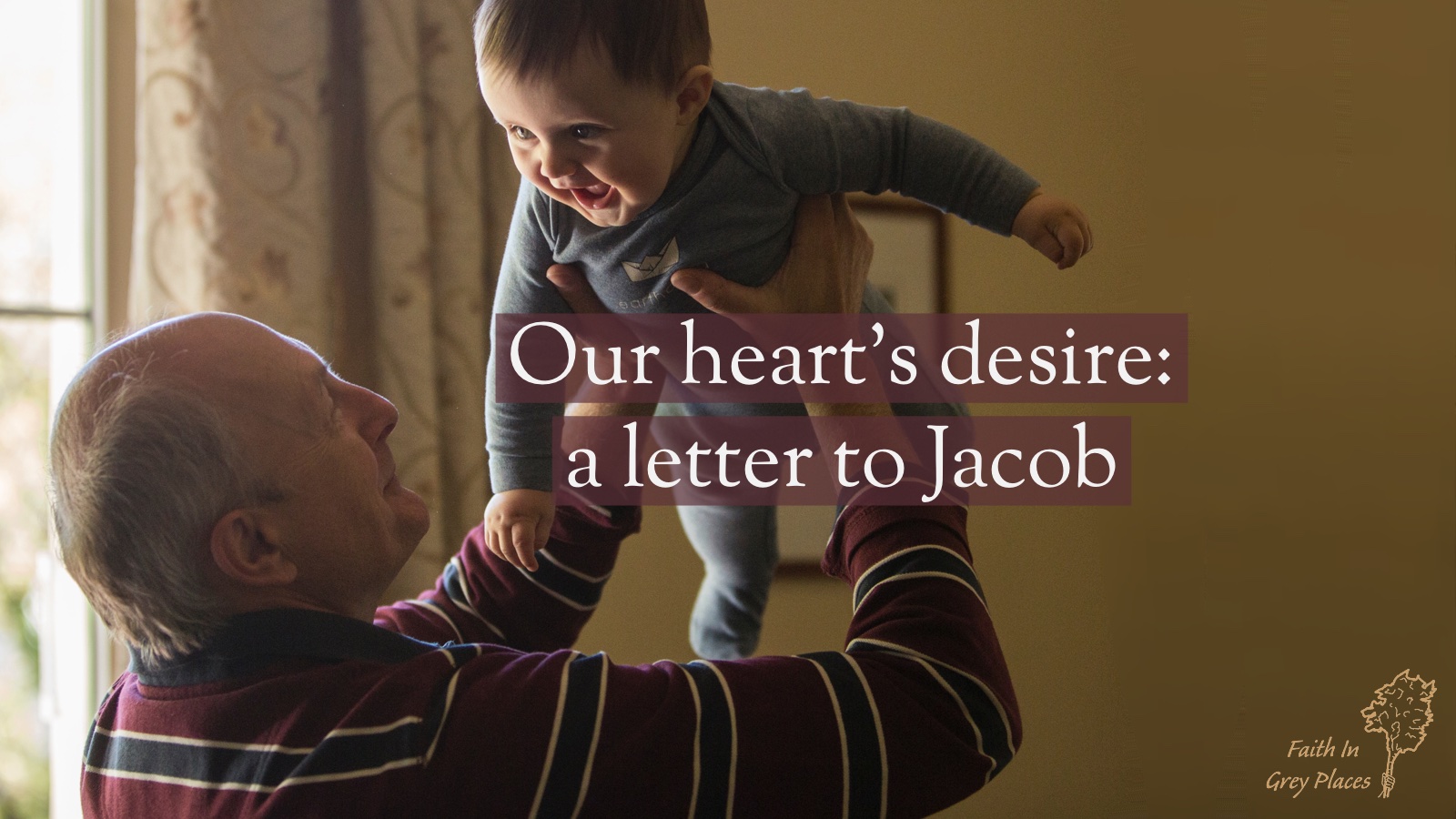 This is part of the series of letters I’m writing to people listed in Hebrews 11 as the “cloud of witnesses” who went before us. This one is to Jacob.

This letter focusses mainly on the end of Jacob’s life.

Backstory (skip if you already know it)

Jacob’s story is told in some detail in Genesis. After he gets Isaac’s blessing (last week’s letter was all about that story) he flees from his brother Esau, lives with his relative Laban and marries Laban’s daughters, Rachel and Leah. They and their slave girls have numerous sons between them (Genesis 28–30). Jacob then leaves Laban, has an encounter with God and reconciles with Esau (Genesis 31–33). His wife Rachel (whom he loved most) then dies in childbirth with her second son, Benjamin (Genesis 35:16–20).

Then we get the story of Rachel’s first son, Joseph (Genesis 37, 39–41). In short, he was his father’s favourite so his brothers sold him as a slave and told their father he was dead. But he ended up in Egypt and (somewhat miraculously) rose to power just in time to manage a famine.

In Genesis 42–44 Joseph’s brothers come to Egypt for food and meet Joseph, but don’t recognise him. In this episode, there are several exchanges with Jacob about whether Benjamin should go with them. It culminates in a speech that Judah (one of Leah’s sons) gives in order to save the livelihood of Benjamin (Genesis 44:30–34). Only then does Joseph reveals himself. The brothers go back to Jacob, tell him that Joseph is alive and they all move to Egypt.

When Judah appeals to Joseph for Benjamin, his speech pivots around the wellbeing of their father Jacob:

33 “So now, please let your servant remain as my lord’s slave instead of the boy. As for the boy, let him go back with his brothers. 34 For how can I go back to my father if the boy is not with me? I couldn’t bear to see my father’s pain.”

This theme is echoed in Genesis 45–48 where God’s promise to Jacob is framed specifically around Joseph; also, when Jacob is ready to die, he regains his strength when Joseph brings his sons to meet their grandfather.

It’s this moment that the author of Hebrews picks up on. So I focussed on Jacob’s relationship with Joseph and why that carried such significance for Jacob.

By faith Jacob, as he was dying, blessed each of the sons of Joseph and worshiped as he leaned on his staff.

Please bear with me a moment.

I’ve been getting my kitchen redone. One of the items I ordered is a bright yellow “splashback”—a piece of glass to go against the wall behind the hob. You know, where food might splash in the cooking process.

At first it didn’t arrive. Then I was told it hadn’t even been ordered. Then I noticed the size in the contract wasn’t quite what I’d asked for. I tried to change the order but was then told the item had already been made as was non-refundable.

I was thrown between conflicting feelings. I was annoyed I wasn’t getting what I’d chosen, but I didn’t want to be someone who’d let a design difference stop them from appreciating the goodness of something. Neither did I want to forget that all this was happening in a context of privilege. So… I accepted the change.

A few days later, I got a call. My item had got lost in the post (seriously!) and it would have to be remade. In other words, I could get the size I originally asked for.

And then I had another set of emotions: I felt bad, very bad that an item had gone to waste. I felt like my desire for the original design had caused this loss on the part of the manufacturer. Of course, it wasn’t my fault at all. Even so, it was hard to shake the feeling of, “Yes, I know I wanted this – but I didn’t ask to have it in this way or at this cost to other people.” But there was nothing I could do to change it. Events had overtaken me.

So that’s a short story about me. Maybe you can guess where this is going?

Growing up, I heard many people talk about your story and all its rough edges. How favouritism was bad. How sibling rivalry and non-monogamy were also bad. You were painted as a pretty bad husband and father albeit, somewhat mysteriously, one whom God blessed.

But as I read your story, it strikes me that all along you had just one desire: to marry Rachel and have children with her. Yes, that probably included having at least one son to carry on your family name (because your culture was patrilineal) but that’s not the point here. The point is, you didn’t set out to have two wives. You never intended to have two concubines. You never expected to have ten sons with Leah, Bilhah and Zilpah. But you did, largely because the people around you pushed their desires onto you.

I like to think that you were able to learn to love Leah for who she was. I’m a big believer in saying that love is a choice. But even if you did, I can understand that your affection and regard for Leah would not have detracted from your love for Rachel, or your hope that she would have children of her own.

So when I look at your story from that angle, I can see why Joseph was so important to you. And I can see why, when you thought Joseph was dead, your life and frailty became so closely tied to the life of Benjamin.

I was fortunate to grow up in a family where my parents loved me and all my siblings in equal measure. There were no favourites, regardless of who was born first (I was last) or how “successful” we were at school. And to be honest, I think that’s how it should be. But in your culture, the whole thing about primogeniture ran deep. And Joseph was the firstborn son of the wife you first tried to marry.

I wouldn’t be surprised if your other sons (and daughter) carried emotional scars from your parenting, but—good grief!—the same can be said of so many parents. I don’t want to judge you.

And this is why I wanted to share my small story about the splashback. I apologise for the many flaws in the analogy, but I can relate to the feeling of aching for the thing you’d always wanted and hoped for. It wasn’t wrong of you to fall in love with Rachel or to want to have children with her. It wasn’t wrong to be emotionally invested when she had two sons. You hadn’t meant to marry Leah, but once you had, you didn’t despise her or send her away. You still gave one of her sons the rights of the firstborn. You didn’t treat the sons of Bilhah and Zilpah as second-class citizens. And, importantly, you didn’t resort to bloodshed to solve your problems.

I nearly cried at what you said when you sent your sons to Egypt with Benjamin: “May the Sovereign God grant you mercy before the man so that he may release your other brother and Benjamin! As for me, if I lose my children I lose them.” (Genesis 43:14) Oh gosh! The sadness of letting go, of bracing yourself for another collapse of your future.

I wonder if, like me, you felt guilty when you heard that your first hope would be realised, that Joseph was indeed alive?

I’ve long been struck by your words to Pharaoh when you met him: “All the years of my travels are 130. All the years of my life have been few and painful.” (Genesis 47:9) Even so, you had 17 years in Egypt, living with Joseph and able to bless his sons Ephraim and Manasseh as your own.

I think I appreciate better now why God told you not to be afraid to go to Egypt and that Joseph would close your eyes. Even after everything that had happened, your hopes would be fulfilled and God would make good on his promises. And you believed him.

I hope and pray that God will meet with me at such times of inflection and help me not to be ashamed of the desires of my heart.

I write to you in the peace and hope of the one to whom all desires are known,

Photo by Johnny Cohen on Unsplash