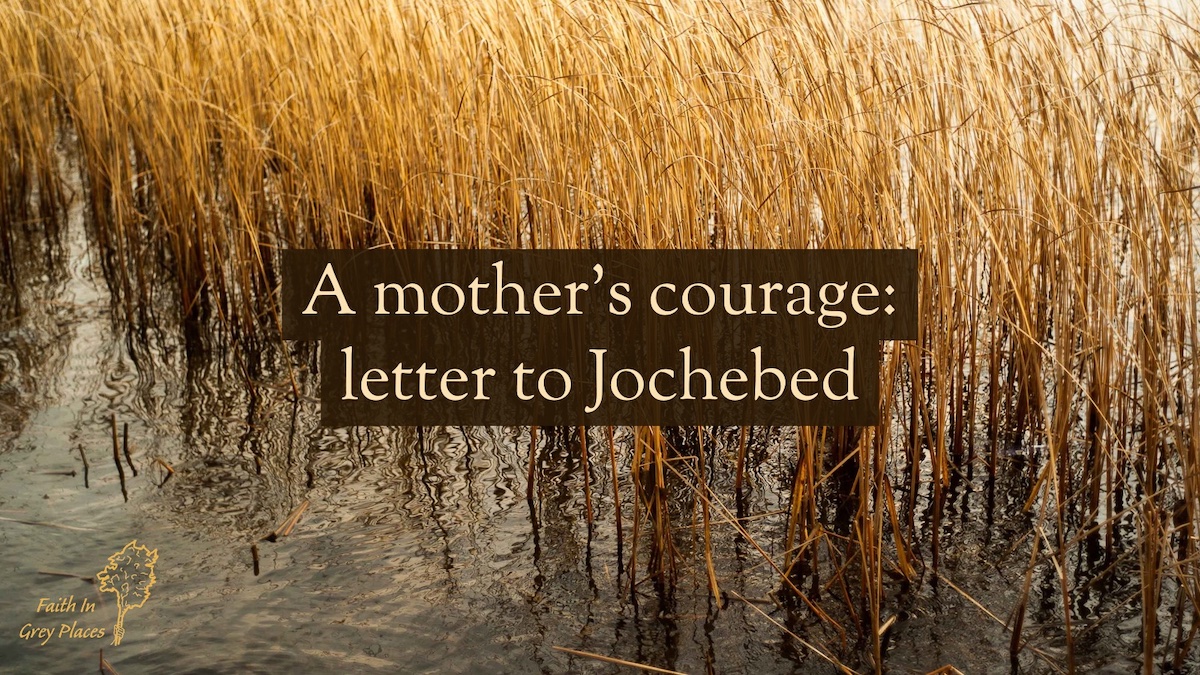 This is part of the series of letters I’m writing to people listed in Hebrews 11 as the “cloud of witnesses” who went before us. This one is to Moses’s mother, Jochebed.

We’ve moved from Genesis to the beginning of the book of Exodus.

The scene is set in Exodus 1:8–22: the Israelites are numerous, the Egyptians are oppressing them. Pharaoh tells the Israelite midwives, Shiphrah and Puah, to commit gender-based infanticide. But instead they refuse (and even lie about it). So, Pharaoh resorts to commanding all baby boys to be thrown into the Nile.

This is where the story of Moses starts. It’s in Exodus 2:1–10. Jochebed—whose name isn’t given here but is listed in the genealogies of Levi in Exodus 6:20—gives birth to Moses and hides him for three months. When this becomes unsustainable, she puts him in a floating basket into the Nile, presumably never expecting to see him again.

However, his sister (Miriam) follows the basket and it just so happens that Pharaoh’s daughter finds it. When she has compassion on him, Miriam pluckily offers to find “a nursing woman” to nurse him. Pharaoh’s daughter likes this idea and, as a result, Moses’s mother nurses him until he’s old enough to live in the palace.

The book of Hebrews refers to both Moses’s parents acting in faith to hide him, but given that the Exodus narrative only mentions Jochebed, I’ve written this letter to her. Moses’s father was a Levite named Amram.

By faith, when Moses was born, his parents hid him for three months, because they saw the child was beautiful and they were not afraid of the king’s edict.

Imagine being the mother of Moses, Aaron and Miriam. Like, wow. You don’t expect that much talent to be in one family. And I know they each made mistakes, but they’re also heroes and roles models for so many people—myself included.

Of course, you wouldn’t have known that when Moses was born. At that time, it would have been hard enough to know whether you would live from one day to the next. Where did you get the idea to put Moses into a basket and place it among the reeds of the Nile? It seems a cunning way to comply with Pharaoh’s order, whilst achieving the exact opposite of what he wanted. Good for you. I can just imagine Shiphrah and Puah coaching you on how to keep Moses hidden, sharing stories of boys whom Pharaoh’s soldiers had not found. Giving you courage. Giving you hope that there was hope.

Did they speak to Miriam? I’ve always been struck by how brazen she was to speak to Pharaoh’s daughter. Did you know Miriam had followed Moses? Did you believe her when she told that you that the princess wanted to see you—but for a good reason?

I tell you, if it had been me, I wouldn’t have known whether to be overjoyed, knowing my son would live, or haunted by the peril my daughter put herself in.

But I guess all the Israelites were living lives that teetered on the edge. I don’t envy you.

I don’t imagine it was easy to give Moses up, even if you knew he would have a future that you could never give him if he had stayed. Had you chosen a name for him? What was it?

I live in what gets called “the global north.” It’s basically the privileged part of the world. For sure, we have our own places of poverty and hardship, but in terms of cross-cultural adoptions, that only happens one-way. The process is mired with politics and “white saviourism,” where rich people can stroke their public image with vulnerable children. The kind that are innocent, deserving and, like Moses, photogenic.

I won’t say that all celebrity adoptions are done for selfish reasons. I’m willing to believe Angelina Jolie was genuinely moved when she saw the plight of people in Cambodia. Ewan McGregor adopted a little girl from Mongolia, but I only found out once she’d grown into a fully-fledged adult. I’m also reminded of Marcelino Sambé. He’s the Royal Ballet’s second ever black principal and he was adopted as a teenager.

But while there are undeniably stories of children who have benefitted from being transplanted to a different social sphere, that doesn’t change the fact that opportunities should be equal for everyone—whoever they are, wherever they’re born. It doesn’t change the fact that these children’s benefactors are ultimately part of a system of inequality, just as Pharaoh’s daughter was.

It is good to know that your son, or rather, sons and daughter, grew up to lead a movement of freedom for an entire people. Their story has become symbolic of the liberation we all ultimately hope for and dream of. Thank you for having the courage to play your part, as exhausting and wrenching though it was. The time will come when sacrifices like yours are no more.

I write to you in the peace and hope of the one who will deliver all creation through its birth pains,

Photo by David Aler on Unsplash