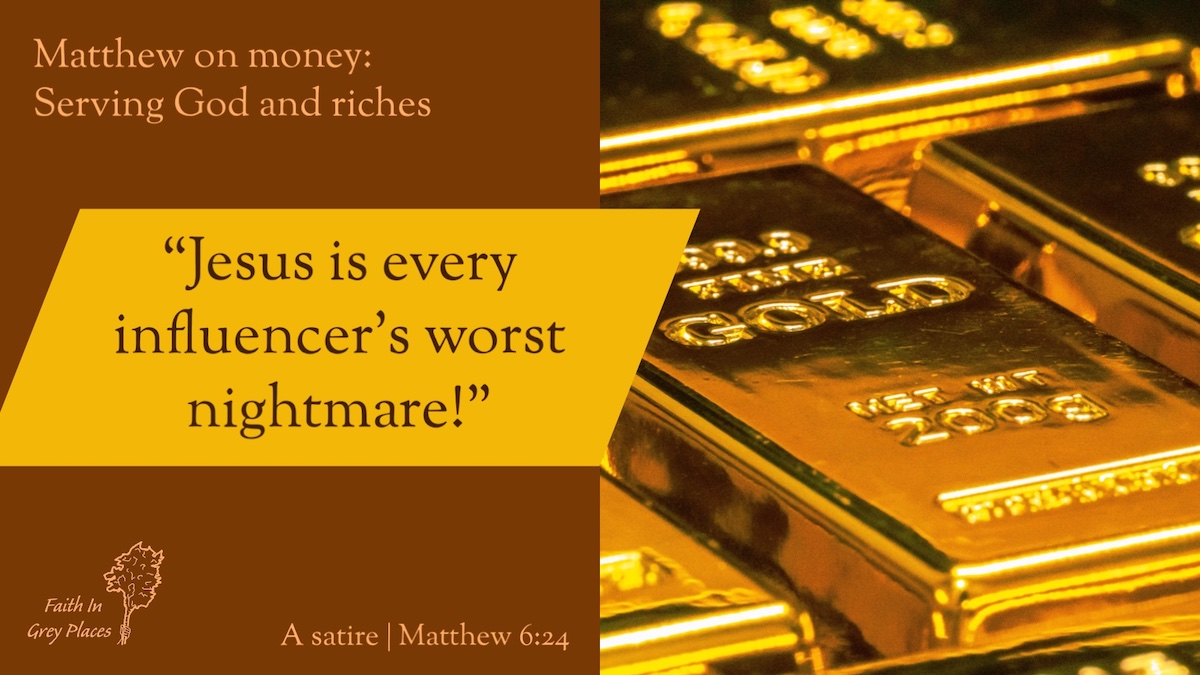 24 “No one can serve two masters, for either he will hate the one and love the other, or he will be devoted to the one and despise the other. You cannot serve God and money. (NET)

The NET has a useful footnote that aligns with how many people would interpret this passage:

Matthew 6:24 tn Grk “God and mammon.” sn The term money is used to translate mammon, the Aramaic term for wealth or possessions. The point is not that money is inherently evil, but that it is often misused so that it is a means of evil; see 1 Tim 6:6-10, 17-19. Here “money” is personified as a potential master and thus competes with God for the loyalty of the disciple. The passage is ultimately not a condemnation of wealth (there is no call here for absolute poverty) but a call for unqualified discipleship. God must be first, not money or possessions.

I would agree. That said, I often hesitate to say, “Money is not inherently evil.” It might be true, but also it’s the kind of thing you’d say if you wanted to argue for the accumulation and hoarding of wealth. And as Paul said (edit: not Jesus!) the love of money is a root of all kinds of evil.

I do believe that money can be used to bring much good in this world and I find it satisfying to see money used well. Recently, I’ve been watching the YouTube channel The Financial Diet and have found it remarkably refreshing. The host, Chelsea, balances the practical, the emotional and the ethical as she shares stories of how money can be used and misused.

There was a recent video about influencers that really stuck with me (this one). She was reflecting on undisclosed sponsored content and how influencer marketing has boomed in recent years.

Now, it’s true that many creatives need to build up sponsorship and advertising relationships in order for their work to be viable as a primary source of income. In itself, that isn’t necessarily a problem and Chelsea is transparent that her own channel also does this.

However, she made a comment that really hit me as she mentioned the aspirations of young people. Given how lucrative the influencer marketing industry has become, she said that many young people now aspire to become influencers for their careers.

Now, it’s not new that people want to be famous for being famous, or that they want to be YouTubers without any idea of what kind of videos they actually want to create. But I couldn’t get over what Chelsea said:

“What they’re saying in that is not that they want to create any particular kind of art or editorial or even educational content, it’s that they specifically want to be the type of influential media personality that’s being paid to shill products.”

The clip, if you want to see it in context, is about a minute from 4m8s.

When I saw it, I knew that this was what I wanted to focus on for today’s post: the idea that you’re living the life if brands come to you to pay you to sell their stuff. Incidentally, there’s another TFD clip from a video about home furnishing that makes this point well. It’s three minutes and starts at 8m55s though the whole video is also worth a watch.

So, here you go. It’s another satire.

Jesus is every influencer’s worst nightmare!

Hi everyone! Today I need to rant about what Jesus said to the Golden Talent Agency when they offered to represent him. Seriously, you couldn’t make it up.

Before we begin, if you’re new to this channel, I’m Silvanus and each week I post about what’s happening in the world of influencers. So if you haven’t already, hit that subscribe button!

Unless you’ve been living under a rock, you’ll have heard about this new sensation from Galilee, Jesus. His personal following is so huge, you’d think he was a local Caesar, handing out bread and circuses every day of the week. (Except the Sabbath, because he’s Jewish.)

He’s built up his following without big financial backers or any kind of PR team, which is saying something. So, he gets noticed by the Golden Talent Agency who think, “He looks like a rising star, let’s recruit him.” And they go up to him and say, “Hey, we’re Golden Talent. We connect influencers like yourself to the biggest brands in fashion and wellness. How would you like to make a killing doing sponsored content through us?”

And these guys aren’t kidding. Golden Talent call themselves that because they literally get their clients talents and talents of gold.

So what did Jesus say? Did he say, “Wow, thank you so much for offering me the deal of a lifetime?” Did he say, “Oh my gosh, this is what I’ve dreamed of doing ever since I was a lonely teenager trying desperately to be relevant and make ends meet in this hollow and relentless world?”

He said, and I quote, “You can’t serve both God and money.”

He actually said that. Seriously. My brain hurts when I think about it. I just wanna yell, “How can you not understand this?!

“When big brands pay you to unbox their merchandise in front of crowds and crowds of strangers, you’re not serving money, money is serving you!”

And if that’s not the definition of success, then I don’t know what is!

So yeah, that happened. That actually happened. And I hope you are all as mad about it as I am.

But don’t leave me wondering – tell me what you think in the chat, it’ll make me feel better!

Meanwhile, I’m gonna go get myself a pizza, a hot chocolate and a roll of designer bubble wrap that I can pop my way through. Popping bubble wrap is so satisfying and clinically proven to relieve stress. If you don’t have yours yet, just click the link in description and use the code MONEY-SERVES-ME to get a 10% discount. Hurry, offer ends soon!

Photo by Jingming Pan on Unsplash