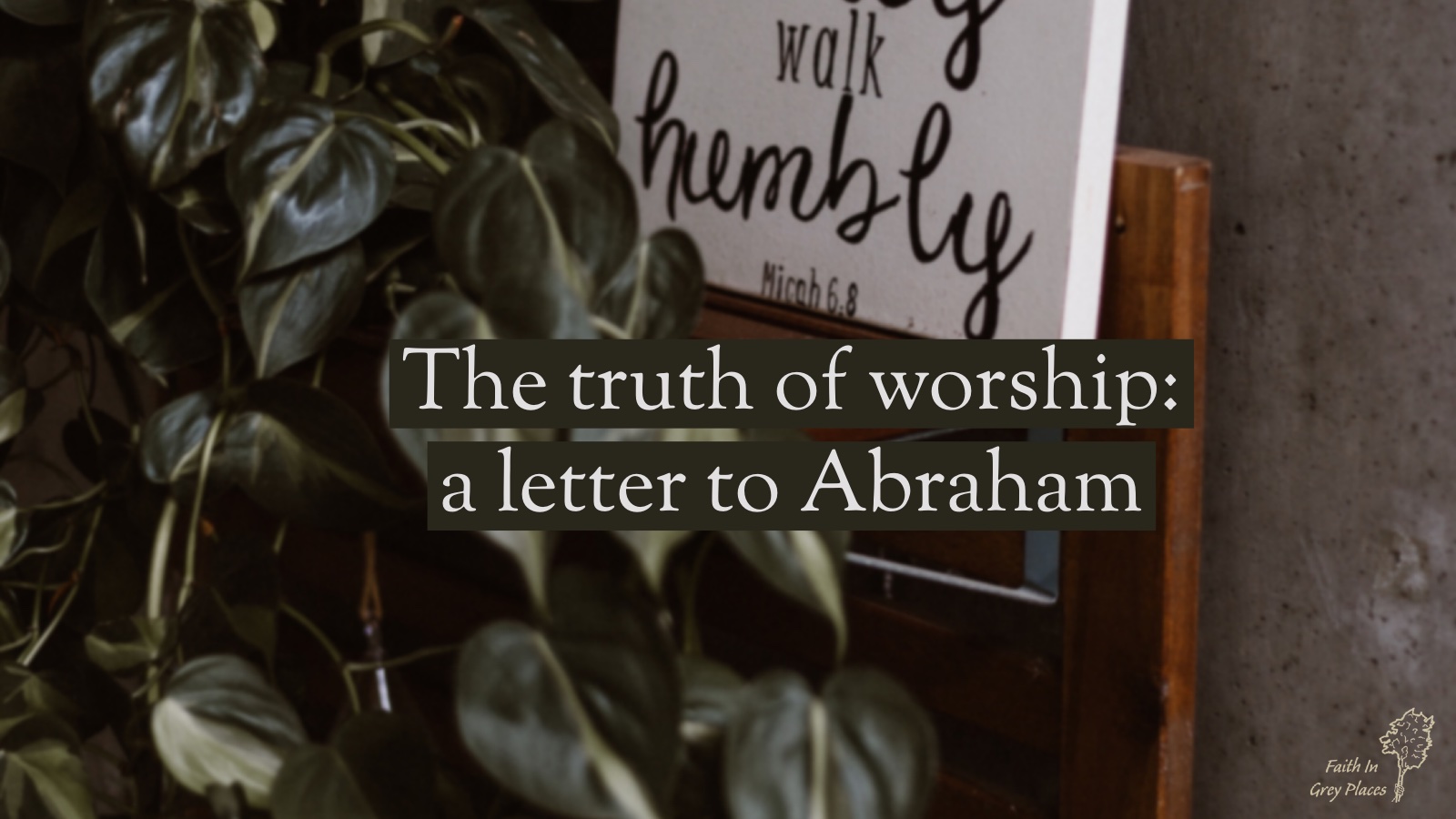 This is part of the series of letters I’m writing to people listed in Hebrews 11 as the “cloud of witnesses” who went before us. Today’s is to Abraham and in particular the part of his story where he very nearly sacrifices Isaac. The story is in Genesis 22, though Genesis 18:1–15 and Genesis 21:1–7 provide context.

Jews refer to the (non-)sacrifice of Isaac as the “Akedah.” Some of what I write in this post draws on a book by scholar Aaron Koller: Unbinding Isaac: The Significance of the Akedah for Modern Jewish Thought (2020: Lincoln: University of Nebraska Press).

By faith Abraham offered Isaac when he was tested. The one who received the promises was offering his only son. He had been told concerning him, Your legitimate descendants will come from Isaac. He figured that God could even raise him from the dead. So in a way he did receive him back from the dead.

The story of you and Isaac has divided so many over these last few centuries.

Some call out, “How overwhelming is the might of God! How sublime is Abraham’s faith! And Isaac—what a perfect lamb, prepared to go to his death…”

I read many of the Bible’s violent stories whilst growing up (though not all). Remarkably, very few of these, if any, stayed to haunt me. This surprises me as an adult, as I’ve come back to these texts and seen their strangeness more starkly. I wonder if they should be told to children at all—and yet they are. Or at least yours is, in both Jewish and Christian households.

With you and Isaac, probably what mattered most to me was how the story ended. Isaac wasn’t sacrificed, he didn’t die. Aaron Koller argues that the climax of this story is not the binding of Isaac, but the unbinding. That that part of the story is just as much a teaching about God—or even a greater teaching—than the first half.

One of the best loved verses of the Old Testament is Micah 6:8: “what does the Lord require of you? To act justly and to love mercy and to walk humbly with your God.” (NIVUK) What I didn’t realise until recently is that the preceding verse is a reference to child sacrifice: “Will the Lord be pleased with thousands of rams, with ten thousand rivers of oil? Shall I offer my firstborn for my transgression, the fruit of my body for the sin of my soul?” (NIVUK)

In my culture and time, child sacrifice is considered abhorrent and, I believe, rightly so. But, as brain-bending as it might be for us to contemplate, the biblical text suggests your culture and your time had a very different worldview. It was a common enough practice that the prophets had to speak against it—repeatedly (Leviticus 18:21, Jeremiah 19:5, Ezekiel 20:31).

And this is part of why your story has been so hotly debated over the centuries. Pre-modern Jewish thinkers focussed on the emotion of it—how could you be willing to give up your son? But nineteenth-century philosopher Søren Kierkegaard focussed on the ethics of it, arguing that a person of faith may sometimes have to override their ethical framework.

The author of the book of Hebrews had a different angle. They wrote that what you did was an act of faith because you believed that even if you did what God had asked, Isaac would be restored to you and God’s promise would remain unbroken.

For myself? I don’t know that I can really talk to the emotions of this—I don’t have children of my own. I don’t agree with Kierkegaard; actually, I think it’s all kinds of dangerous to believe in a God who would command something clearly unethical. And that’s never been my experience with the Holy Spirit. But I also wonder how the author of Hebrews could say that you believed in resurrection. Could you even imagine resurrection as a concept? Were they reading their worldview onto yours?

I guess on some level your big challenge was believing that the God who called you to leave your family, who promised to make you a father, who promised Sarah would be a mother, was the same God who called you to give up your son of promise. I imagine you would have found it easier to give up your own life: you were old and full of years, you had seen Isaac with your own eyes, he and Sarah would have had each other. But to be asked to surrender the hopes of your family line, the future that you had longed for and long waited for—that would have been much harder.

Genesis doesn’t say how old Isaac was. He could have been 8. He could have been nearly 40. He was 40 when he married Rebekah. If you loved him, I don’t think you would have seen him as a vessel for your legacy—though that cultural pressure probably weighed on both of you. Today, we talk about recognising someone as a person in their own right. And that’s the key lesson Koller takes from your story: that Isaac was an autonomous person, with his own agency. And that’s why the ending matters so much: worship, true worship, cannot happen through harm the harm of another.

Job (I’m guessing you’ve both met by now?) said that the LORD gives and the LORD takes away. I like to think I’m the kind of person who can receive gladly and let go willingly. But at the same time, I want to believe in a God who gives and gives generously, whose goodness does not pass with the seasons, but endures forever.

I don’t understand death; maybe its greatest grievance is that it is devoid of meaning. But I do believe that God gave his son over to death—not because he had to but because he knew that even with such a soul-rendering sacrifice, death would not have the final victory. The life God gave in Jesus is given for all, that all may live, however needlessly or prematurely death takes us.

And hey, I won’t pretend that I’d have written your story this way or told it the way Genesis tells it. But I’m willing to believe that the way I am now, and the beliefs and ethics I have now, owe themselves (at least in part) to the story of your faith.

And if so, then I am grateful and glad.

I write to you in the peace and hope of the one who has rescued us from death,

You can find out more about Aaron Koller’s book Unbinding Isaac on the Jewish Publication Society website.