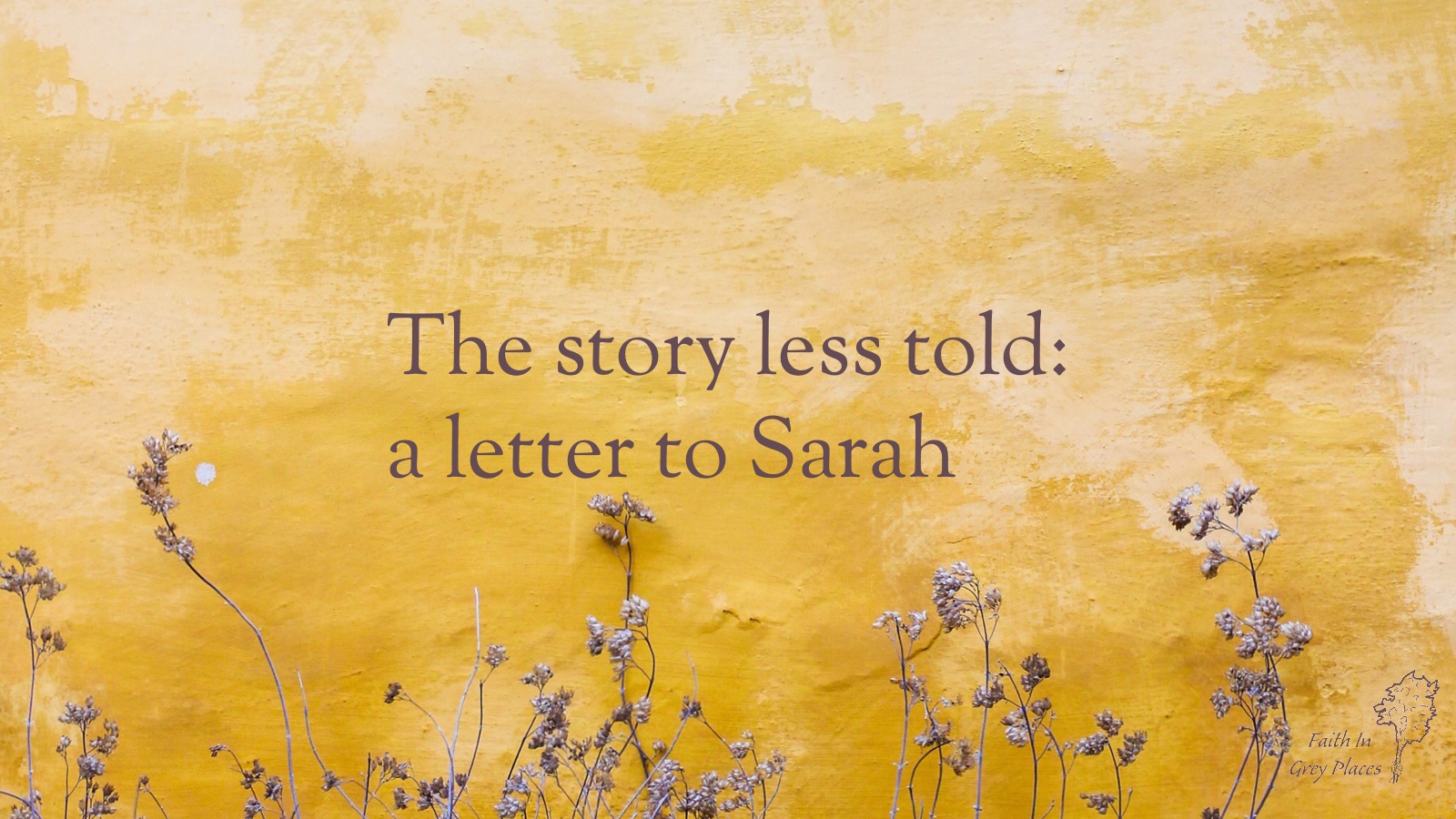 Sarah’s not exactly a comfortable story—both in terms of how Abraham treated her and how she treated Hagar. Nevertheless, Sarah’s story and her identity as a mother figure was of huge importance in Jewish thought and we can see this in New Testament writings.

In Romans 4, Paul argues that people are metaphorical “children” of Abraham if they share his faith. But the reason Paul gives is that God fulfilled his promise to Abraham specifically through Sarah’s son Isaac, who Abraham believed in faith would be born. There are similar echoes in Galatians 4. Also, in 1 Peter 3, Peter writes that women are Sarah’s “daughters” if they “do what is right and do not give way to fear.”

But it’s not exactly easy stuff to get through.

When we read the story of Sarah and Hagar, it’s hard not to feel sympathy for Hagar and wonder why, when Sarah was so unfair to Hagar, God seemed to side with Sarah. I also often find myself wondering if the author of Hebrews really had it right when they wrote, “By faith even Sarah received the ability to have a child … she believed that the one who promised was faithful.” After all, Sarah laughed, presumably in ridicule, at the thought she would bear a son. That’s why her son, Isaac, is called, “He laughs.”

So yes, Sarah’s is not the easiest story to read. But it’s also too important to miss.

Today’s letter is a bit longer than usual, but I found it transformative to write.

By faith even Sarah received the ability to have a child, though she herself was barren and past the age for having children, because she believed that the one who promised was faithful. So descendants were born from one man (and he was as good as dead). They were as many as the number of the stars in the sky and as countless as the grains of sand on the seashore.

It occurs to me, that your son Isaac must have told his son Jacob about you. And Jacob told his children in turn. I can picture him sitting round the fire with a young Reuben, Simeon, Levi, Judah, Dan and Naphtali, telling them all stories about their great grandparents.

I wonder how easy it would have been for Jacob to tell your story. Like you, Jacob’s wife Rachel was barren, while his other wife Leah, whom he loved less, had already had four children. Like you, Rachel looked to her slave, Bilhah, to have children on her behalf. Maybe Bilhah was sitting round the fire too. Maybe she heard the story of Hagar.

Part of me wonders whether your story is told the way it is, because the people who came after you had complicated lives and complicated questions. I’m guessing you wouldn’t have told your story the way Genesis tells it.

I personally find your story difficult because I feel like I’m supposed to believe it’s a story of faith and triumph and… well, it doesn’t read like that. Not to me, at least. It feels more you were swept along by the social structures and expectations of your day, not to mention your husband’s strange encounters with God.

I don’t like that Abraham tried to pass you off as his sister. Twice. I like to think that God spoke to you in those moments to reassure you. I mean, he did that with Hagar in the desert.

I also don’t like that you mistreated Hagar. I don’t like that God never seemed to criticise you for what you did. But then, maybe he did and it just didn’t make the cut.

I could well believe that both you and Hagar were products of your culture, that valued children and the family line above all else. Maybe she did take undue pride when she became pregnant with Ishmael. But even if Hagar was blameless, I could imagine how much her pregnancy would have stung you.

Even so, it’s hard for me to ignore that you were the one in a position of power. I find myself more willing to believe that you were at fault, than she was. Let’s face it, after Isaac was born, you sent her away.

And it’s that—it’s that that I really wrestle with.

Throughout the Bible we hear that God has concern for those who are least among us. But in your story, the one who was least was sent away. And, in blunt terms, for the sake of money. What was that about? Like, seriously?

Yes, I know that many people have read yours and Hagar’s story allegorically. Some have seen Hagar as representative of the Israelite people as a whole; after all, her story fore-echoes the exodus: she endured hardship in slavery, was sent into the wilderness, lacked water, and was given water by God.

In the 19th century, as the Art Institute of Chicago explains, “the story of Hagar was understood as an allegory of slavery that illustrated the indignities suffered by black women as well as the disenfranchisement of all African Americans.”

And then there’s Galatians. And… oh gosh, deep breath…

You know, I have a lot of time for Paul. But I don’t find Galatians 4 easy to read. I’ll pick this up again when I write to Moses, but um… I guess my point is that the allegories don’t help me here. They might be deep theology and they might be of great comfort to people who face affliction, but they don’t help me understand you.

Instead they tell me that people have put a lot of weight onto your story. I mean a lot. Are you all right with that? Not sure I would be.

The irony, even tragedy, in all of this is that, in sending Hagar away, you sought to preserve your legacy. And yet, that very action now means that Hagar’s story often eclipses yours. It would be easy to say, “There’s a lesson here,” and maybe there is, but I still find it sad because all this happened in a context where Abraham’s story overshadows yours.

Oh, and then, Jesus came along and the church now holds Mary as the archetypal mother figure. Peter wrote of you as being a mother to those who believe, but, um, some of what he wrote hasn’t aged well. It gets weaponised against women a lot.

If I’m honest, it makes me pretty angry how the New Testament writings about you have been put to harmful use. The anti-Semitism from Galatians and the misogyny from 1 Peter. Your story doesn’t get much room to breathe.

I know what it’s like to receive a promise and wait a long time to see it fulfilled. I still haven’t conquered the ache, the self-doubt, the second-guessing. For you, it was 20 years between when God first promised you would have a son and Isaac was born. And it all happened in the twilight of your years. Gosh, I can feel my clock ticking and I’m not even half of what your years were.

I can kind of see why you did what you did with Hagar—at least to begin with. It was common for slaves to be surrogate mothers in your culture. And it’s not like Abraham didn’t agree. I like to think I would never commodify a person’s body that way, but if I’m honest with myself, there’s probably no small amount of slavery in my supply chain.

I guess, on some level, you must have still believed that God would fulfil his promise.

It’s easy to concretise our hopes—make them so specific that they can never be fulfilled. I actually think that surrendering ourselves to uncertainty is one of the things that opens up hope. And… I can see how you might have been doing that. You let go of the idea that that God would specifically use your body to fulfil his promise. Put like that, what you did was an act of courage.

Oh yeah, sure, plenty of people have weaponised it and said we should always wait on God’s plan and if we don’t, we’re sinning. No prizes for guessing what I think of that argument. But I can believe that you actually, genuinely believed God.

So maybe the author of Hebrews was right. Not that I thought they were wrong per se, but… I feel like I have a better understanding for the importance of what they wrote.

Before I finish, I want to go on record about something. I think your story is indispensable for understanding the Christian faith. Genesis records much about Abraham, but God gave you a new name too. Abraham has had much more airtime than you have (and much less criticism) but—at the risk of getting allegorical—I think there is a profound truth illustrated in you two as a couple.

Abraham believed God’s promise, but that wasn’t the whole story. Afterwards, there was a long wait as the promise took form. I think both the moment and the aftermath are important. They come as a pair of equally important parts. And maybe that’s so obvious it doesn’t need to be said, but I think this is huge for understanding what it is to be in fellowship with God. We don’t just enter covenant relationship with him, we remain in it too.

It’s the active action of remaining, waiting, anticipating, hoping, that I believe your part of the story symbolises. But um… I still need to write my thesis.

Anyway, I’ve really appreciated being able to write this and I look forward to meeting you, even if I’m not sure when.

I write to you in the peace and hope of the one who gives good gifts to all his children,

The idea that Hagar was an allegory for the children of Israel as they came out of Egypt is something I think I read in Aaron Koller’s book Unbinding Isaac. Also, next week’s letter will be to Abraham (again) and this time I’ll be writing about the sacrifice of Isaac.

I wrote more about the idea of initiative not being a sin on my main blog, Light in Grey Places. You can read it here: Yeah, I know Sarah didn’t wait on God, but choosing to act is not a sin.

Photo by Mona Eendra on Unsplash