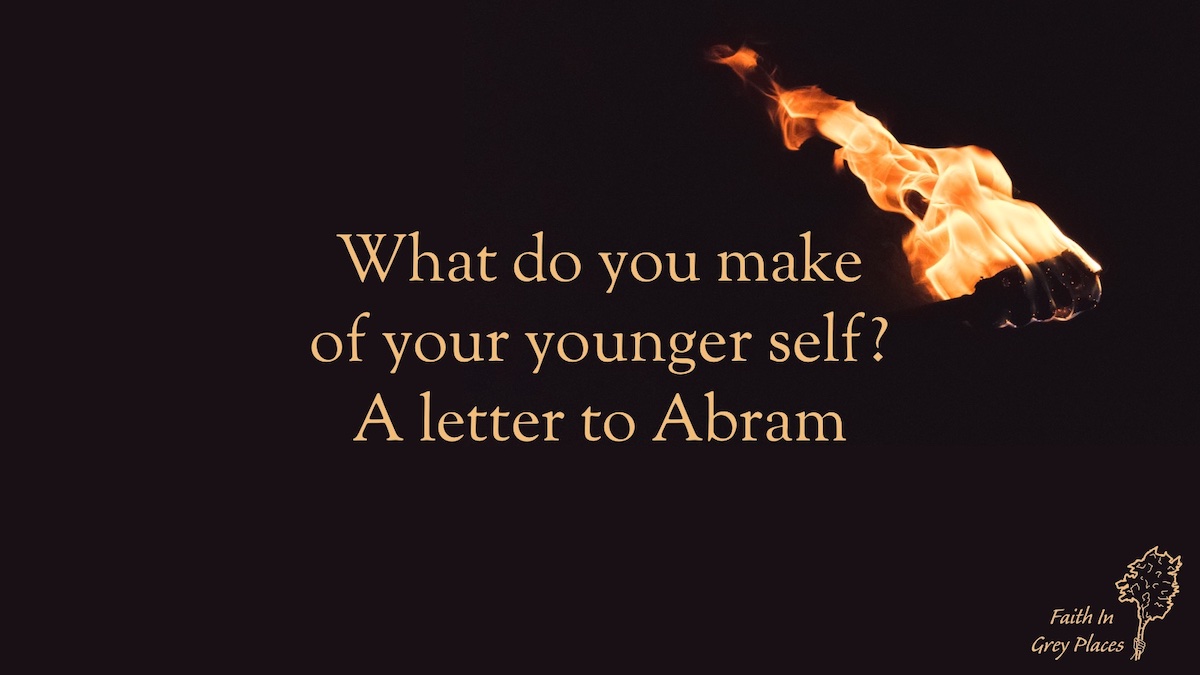 This is the fourth in the series of letters I’m writing to people listed in Hebrews 11 as the “cloud of witnesses” who went before us. Today’s is to Abram (later renamed Abraham) looking at the events of Genesis chapters 12–15. I will write another letter to Abraham in a couple of weeks.

I’ll be honest, I have many unanswered questions when it comes to Abraham. And part of me wonders if that’s the point: he wasn’t meant to be perfect. It was just that there were moments in his life when—for whatever reason—he was able to recognise the voice of God for what it was.

A few basics about these chapters of Abram’s life:

I guess everyone calls you Abraham now. I have many questions.

Do you ever look back to your younger self? Do you recognise yourself?

Did you have any inkling how much people would write about that one moment: “Abraham believed God and it was credited to him as righteousness.” You were 75 at the time, but when you look back, do you think of yourself as a child? Do you know why exactly you believed God’s promise? Do you ever wonder if your older self might have responded differently?

Did it seem logical to uproot from where you were living? Or was it like a dream—where everything seems normal until you wake up? Were you conflicted? Was there a family row? Or did they miraculously accept your departure and send you off with their blessing?

What was it like travelling all the time? Making and breaking camp? Were you excited? Did you dream about the future that would be built there? Did you doubt things would work out when the famine hit and you relocated to Egypt?

Do you regret what you did in Egypt? How you treated your wife, Sarai? Did you feel embarrassed afterwards, like you should have trusted God more? Did you tremble inside when God intervened? Did you apologise?

How did you choose who to make alliances with? Why were you loyal to your nephew after you left your family? How on earth did you have 318 fighting men in your household? And how did you and these men manage to take down four kings? I don’t understand the maths.

What was it like to go up and down the country and to be visited by God? Did the unpredictability get to you? Or did you feel God’s presence with you? How did you feel when God cut a covenant with you? Did you expect to walk between the animal pieces? Were you surprised when you didn’t?

What did you make of the nightmare? Did you wonder if God is good? Did you cry? Did you cry out? Were you traumatised? Did you have to sit and recover? Did the horror stay with you? Or did it dissipate when you saw the torch? Did you ever struggle to know what was real and what was not? Or was it all so real you could never forget it? If I’m honest, I hope it was the latter.

Did you ever look back on your story and wonder at how strange it was? Did you ever ask why? Is there any advice you’d have given yourself when you first set out? When did you first realise that God was far more powerful than you’d ever imagined?

How did it feel, knowing that you had to wait for God? That you couldn’t just take the land for yourself? That you couldn’t control when or whether Sarai would have a child? Did it bother you? Did you trust that God had it all in hand?

Do you recognise yourself in the stories told about you? Would you change them? Or have you got past that stage? Are you able to trust that, with all that you did and didn’t do, God will use your story for great good?

Because you know, that’s the biggest question on my mind right now. And the answer isn’t really in my hands. But then, I’m not sure your story was in your hands either.

I write to you in the peace and hope of the one whose calling is irrevocable,

Photo by Igor Lepilin on Unsplash