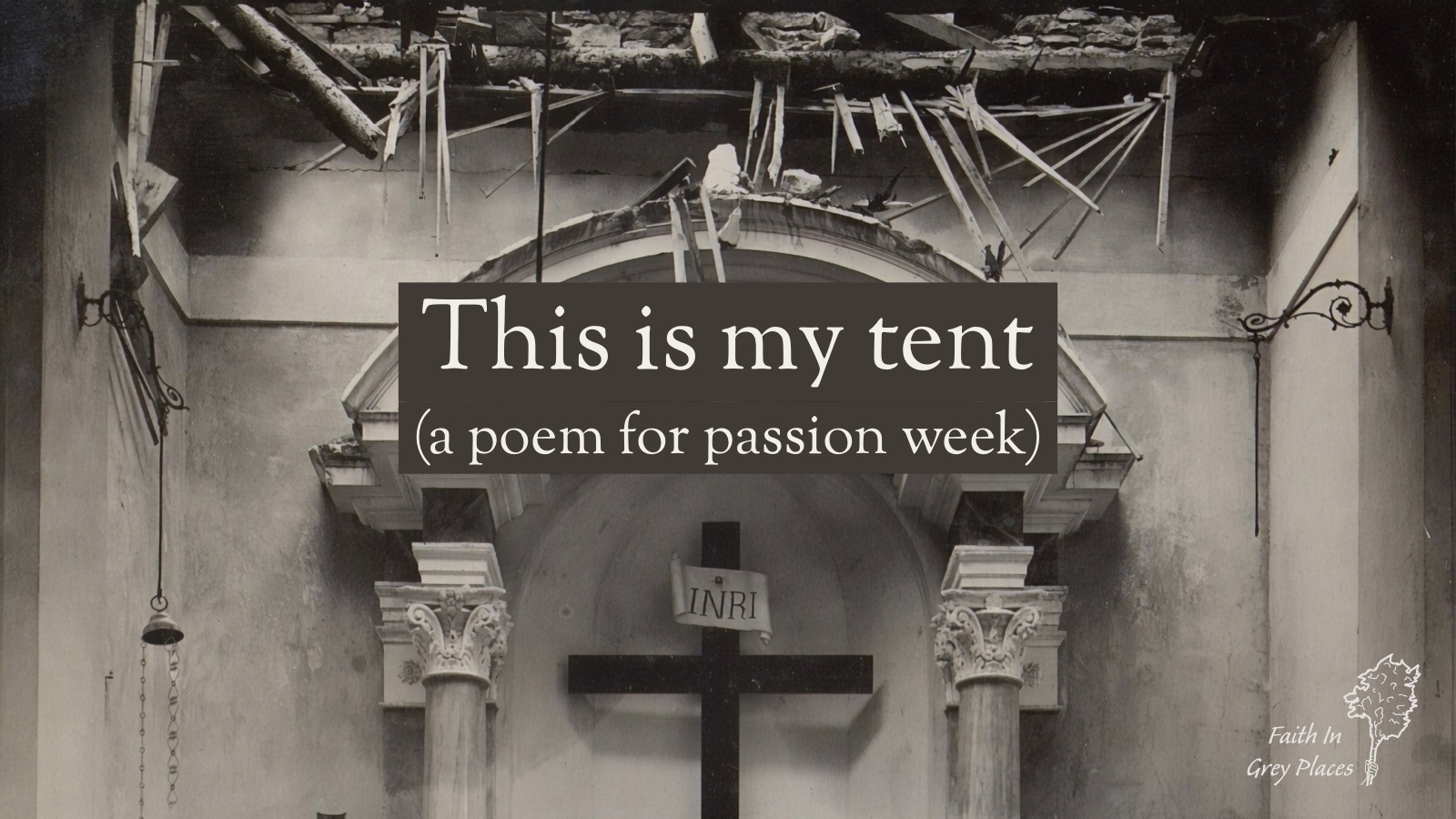 For lent 2022, I’m writing six duologues between Samuel and other people in the Bible, all on the theme of living with conflict. The duologues are taking longer than I’d hoped to write, so this week I offer a poem instead.

It’s no secret that on Good Friday, Jesus suffered a long and agonising death. I have long struggled with Christian imagery and literature on the passion of Christ. On the one hand it shouldn’t be sanitised, but on the other it’s almost too much to bear thinking about. I’ve also struggled with depictions of Jesus’ suffering that seem to revel in the pain; it makes me wonder whether the artists in question have any comprehension of what torture is like.

And then of course, I come back to the fact that I barely know myself.

Last year, in my series of passiontide and Easter poems, I wrote a pair called “Father, forgive.” The second verse of one of them has the line: “Father, forgive me, because I never want to know what I cost your son.”

It was (and remains) an honest confession.

That said, over the last week I’ve felt compelled to consider the body, especially because of what happens to bodies during times of conflict. I couldn’t ignore this.

The body is also in many ways analogous to a home and can carry all the connotations of hospitality and welcome.

Perhaps for this reason John wrote that Jesus became flesh and “tabernacled” among us and Paul described his body as a “tent” in 2 Corinthians 5. Like a body, a tabernacle or tent is very much a movable dwelling.

It’s also temporary. Hence Paul says that we wait to be given our “house”, which is currently being kept in heaven for us. His point is not that our future bodies will be immovable, but that they will be far, far more durable.

As an aside, I fully believe that our resurrection bodies, like Jesus’, will have all the benefits of being a physical body. The difference is that our bodies will no longer be susceptible to death. As Paul writes in 2 Corinthians 5:4 and 1 Corinthians 15:53–54, the time will come when our mortality is clothed with immortality. When that happens, the Holy Spirit will be the generative power of our bodies in a way that we do not currently experience.

In case you missed it, this is what I was getting at in one of my recent duologues, where Ezekiel says to Samuel, “Death was what made the oil in your lamp run out, not maths.”

Coming back to Jesus’ passion and the theme of living with conflict, I decided to write a poem this week that draws on the image of a tent as a metaphor for the body.

I called it “This is my tent”, alluding to Jesus’ words at the last supper. But I also chose this phrase because it implies someone looking at a scene of devastation. Whilst the poem is ultimately about Jesus and his body, much of it could be said by someone looking at their home and hometown after it has been destroyed.

This is my tent

This is my tent.
I loved it well.
I lay in it under many skies,
And took it over many waters.
I filled it with good things.

This is my tent,
Now torn and spoiled.
Its canvas slashed,
Its ropes shredded,
Its beams broken.

Thieves and marauders did this.
Greedy for plunder.
Tramplers of earth,
Speakers of lies.
Lord, have mercy.

This is my tent,
Spread out for all to see.
Birds land upon it,
Insects crawl within it,
Emptiness lies around it.

This is my tent
And I love it still.
Yet in my grief, I have hope,
That heaven will house here
The bounty of hospitality.

A footnote about resurrection

One might think from Paul’s writing that our existence in heaven will be with a different, maybe non-physical body, but Tom Wright disagrees. He argues:

If I assure my guests that there is champagne for them in the fridge I am not suggesting that we all need to get into the fridge if we are to have the party.

Having a heavenly body waiting for us means that our immortality is currently being kept (in safe keeping) in heaven for us. If you want to read more on this, I have several posts on my sister-site Light in Grey Places that deep-dive 2 Corinthians 15. The one that specifically looks at resurrection bodies is the last one (part 4) though if you haven’t specifically studied resurrection as a topic, you may find it easier to begin with part 1.