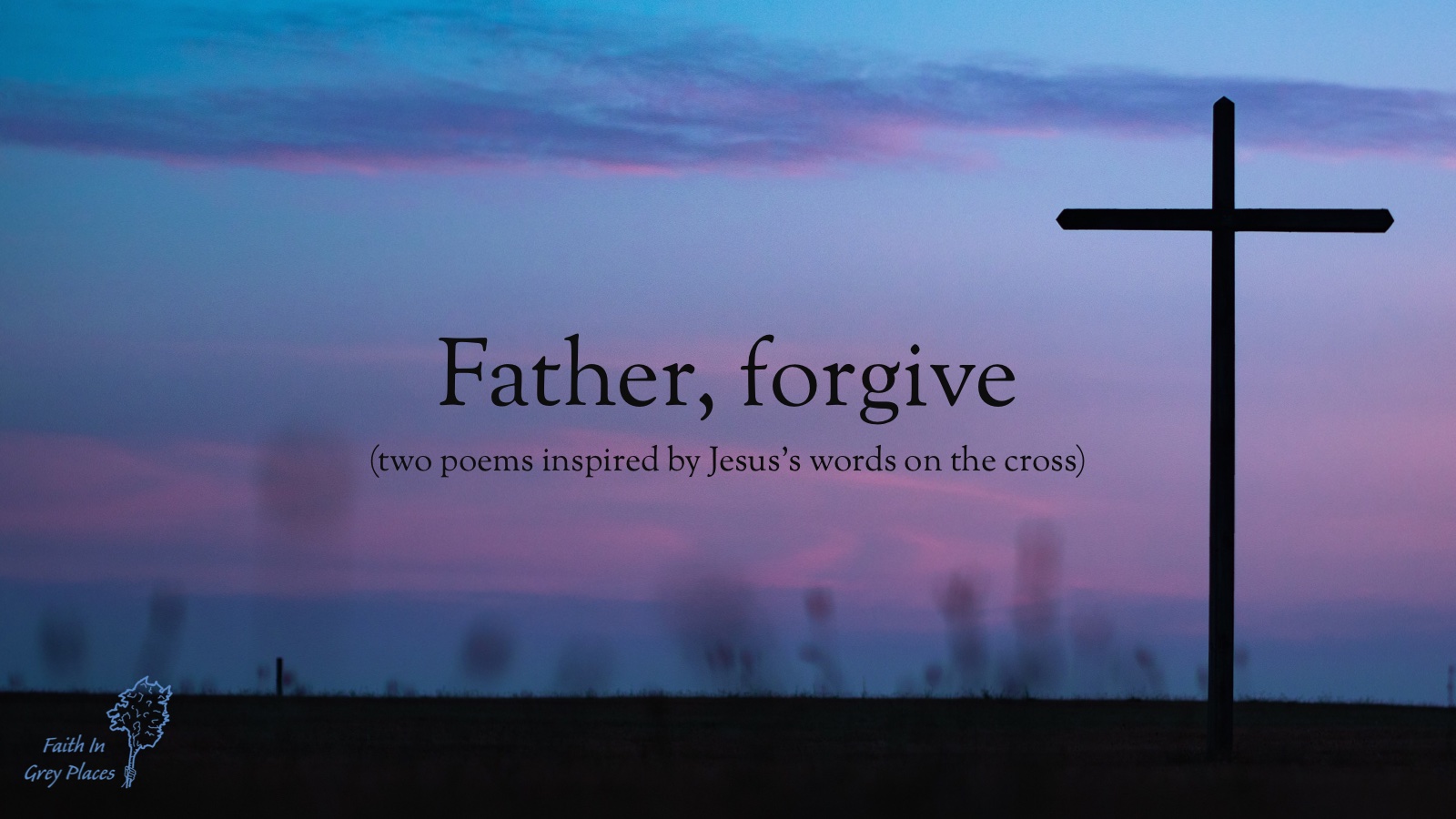 Two short poems this week, both reflecting on a prayer Jesus made whilst he was on the cross on Good Friday: “Father, forgive them, for they don’t know what they are doing.”

It’s recorded in Luke 23:33–35, though some manuscripts don’t include it. Curiously, the NET footnotes say that “even those who regard the verse as inauthentic literarily often consider it to be authentic historically.”

Skip to the poems

There’s a lot to be unpacked here. If people don’t know they are committing a wrong, are they at fault? If they don’t know, but ought to know, should they be held accountable? When a person is made aware, how should they react? When is “I didn’t know” an excuse to duck responsibility, and when it is an awe-filled statement of regret? And can a wrongdoer ever truly know the impact of their actions?

For a while now, I’ve had a growing feeling that Christians perhaps don’t think of Jesus as an abuse survivor as much as we ought. Of course, in this context “survivor” is a strange term. Jesus died. He’s less a survivor and more a resurrected saviour.

But it’s because he died to save us that we think of the cross first and foremost as something for our benefit. And whilst there’s probably nothing wrong with that, it can mean that we don’t stop to think about how our conversation impacts on Jesus as a ‘survivor.’

If we talk about topics like domestic abuse, rape or suicide, we’ll try to be considerate and put up content warnings. That way, we reduce the risk of triggering anyone. But when it comes to the crucifixion, we don’t ask ourselves, “Hey, maybe we should be sensitive to Jesus in how we talk about this?”

I guess we assume that Jesus, miraculously, doesn’t carry any trauma.

And yes, I’m willing to believe that he genuinely doesn’t; I’ll gladly believe that his resurrected life is one where he stands truly healed (albeit scarred). That said, I think I have much to learn from abuse survivors in how I interact with Jesus.

Because maybe Jesus hasn’t made me listen to his impact statement, but good grief he’d be entitled to. And I suppose part of me, actually most of me, doesn’t want to hear it. Hopes never to hear it.

I therefore think, at the very least, I should be grateful for that and recognise it as a grace I do not deserve.

Two poems today. One from Jesus’s point of view. One as a prayer.

Father, forgive me,
For I do not want to know
What I am doing.

Father, forgive me,
For I never want to know
What I cost your Son.

Father, forgive me,
For only with your Spirit
Will I be willing.

Father, forgive them,
For they do not understand
What they are doing.

Father, forgive them,
So that when they understand
They’ll want to know me.

Father, forgive them,
For this is my Spirit’s will
And you are willing.

Photo by Aaron Burden on Unsplash