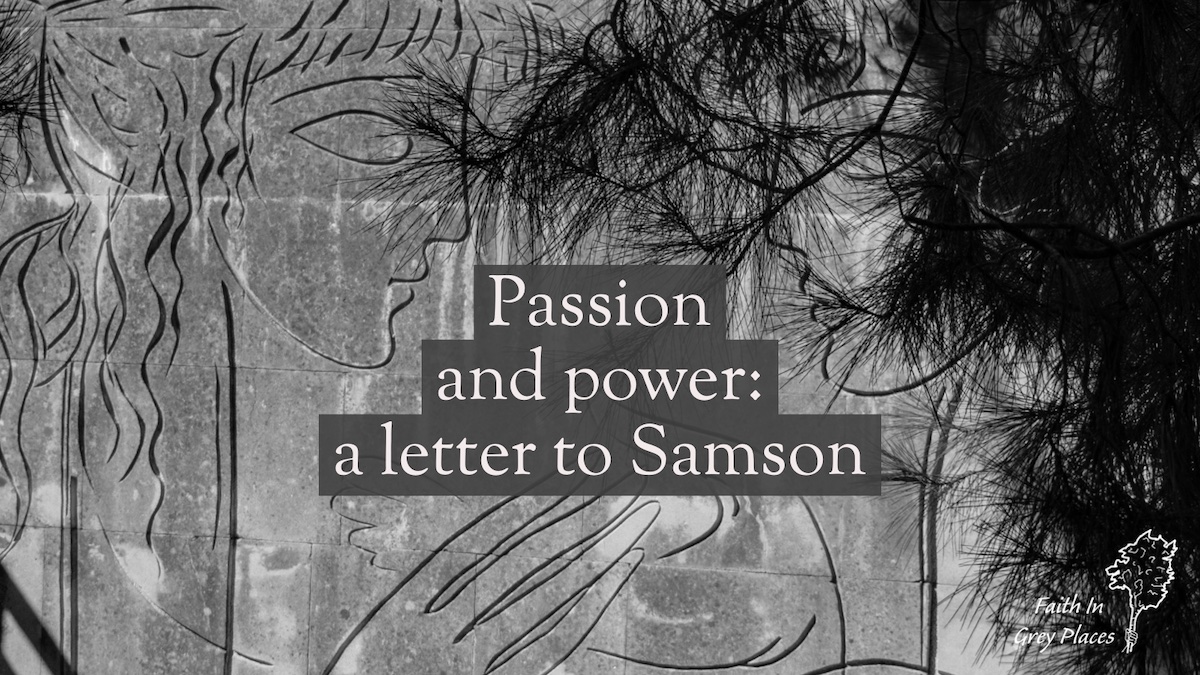 Today I write to Samson. His birth story is in Judges 13, and the account of his life is in Judges 14–16. The narrative seems to pick out the most dramatic events, which makes it easy to miss that he ruled (judged) Israel for 20 years.

His birth has parallels with that of John the Baptist: his mother was barren, an angel visited to announce Samson’s conception, and he was to be dedicated to God from birth. You also get the impression that they were both quite wild and unconventional people—and they were both imprisoned before they died.

That said, Samson’s life was far less mild-mannered than John’s, both in terms of how he handled conflict and how he died.

In this letter I’ve grappled with the tumultuous life he led, what the biblical author seems to imply about God. None of this is straightforward, but it’s an important story nonetheless.

Sometimes I find it hard to believe your story is anything other than a testosterone-fuelled adrenaline rush.

You fell in love, but wouldn’t listen to your parents when they tried to dissuade you. You entered a gambit with the Philistines, resulting in copious bloodshed and costing the lives of your love-interest and her father. The narrator of your story says you fell victim not just to the seductive wiles of women but also their incessant nagging. In a devastating fall from grace, you were brutalised and imprisoned. And then, in the grand finale, you ended your life in an act of violence that my generation would view as resembling a ‘suicide bombing’.

Why didn’t you think that your riddle would place your bride’s life in danger? Why did you murder 30 men just to pay your end of a debt? It seems you were always fighting fire with fire.

But then, never mind the scribe, what about God? Why, why, why would God’s Spirit continue to rest on you, through all your hot-headed acts of violence, and then leave you for something so seemingly trivial as your hair?

Your story has the feel of a Leonardo di Caprio movie. You’re more like a spritely young Romeo than a Spirit-filled Nazirite. You have the ruthless force of the wolf of Wall Street, and the relentless ingenuity of Frank Abagnale, but despite all the havoc you wreak, you’re the hero.

I guess your contemporaries didn’t see the Philistines as victims.

To be fair, you’re not really the one who unnerves me in this story. Though many Christians in my day are quick to talk about peace and non-violent resistance, many of them haven’t lived with brutality on a daily basis. And, given what the Philistines did to your bride and her father, they were pretty brutal. This whole story happened in a context where the Philistines were oppressing the people of Israel. It’s easy for us to sit in our armchairs and think we’d do better.

I also believe it’s important for us to hear stories, like yours, that make us uncomfortable. We’re quick to moralise about the ethics of suicide bombers, because we think it’s a straightforward black-and-white issue. But war is never simple.

I won’t deny that there is a grievousness in the martyrdom culture that makes men (and women) willing to throw their lives away in such a destructive manner. And it goes far beyond the grievousness that is inherent in all loss of life. But I like to think there is more nuance to your story.

You lived your life before you let go of it. And at the end, you made a request of God, instead of trying to decide for him.

I dunno… I guess there’s something about the way the Philistines made you a spectacle that I can’t get over. That is the reason why I don’t flinch so much at the idea of you taking them all out. But then, I’ve never lived through the aftermath of something like that, so… I may find myself changing my mind.

Probably the biggest influence on my thought here is that whoever wrote the book of Judges didn’t have any qualms with what you did. They recorded your last words—and yet how did they hear them? Were they putting their own spin on your story? Were they, like me, desperately looking for God amongst the bloodied ruins?

Oh, I also want God to withdraw his empowering Spirit from Christian leaders who—knowingly or otherwise—wreak havoc through their positions. But truth be told, I don’t think he quite works that way. And that makes me profoundly uncomfortable.

But I also know that God is most clearly seen in the person of Jesus Christ and he… well, he lived a very different life to yours. And I know he gets it. He understands the horrors of spectacle, he doesn’t stereotype women, and he’s borne the cost of non-violence.

And I know that’s not really true. But gosh it feels true sometimes. And that’s why it means so much to me to know that God came to you, even in your time of weakness and humiliation.

I write to you in the peace and hope of the one whose power is foolishness to the world,

Photo by Maxim Titov on Unsplash