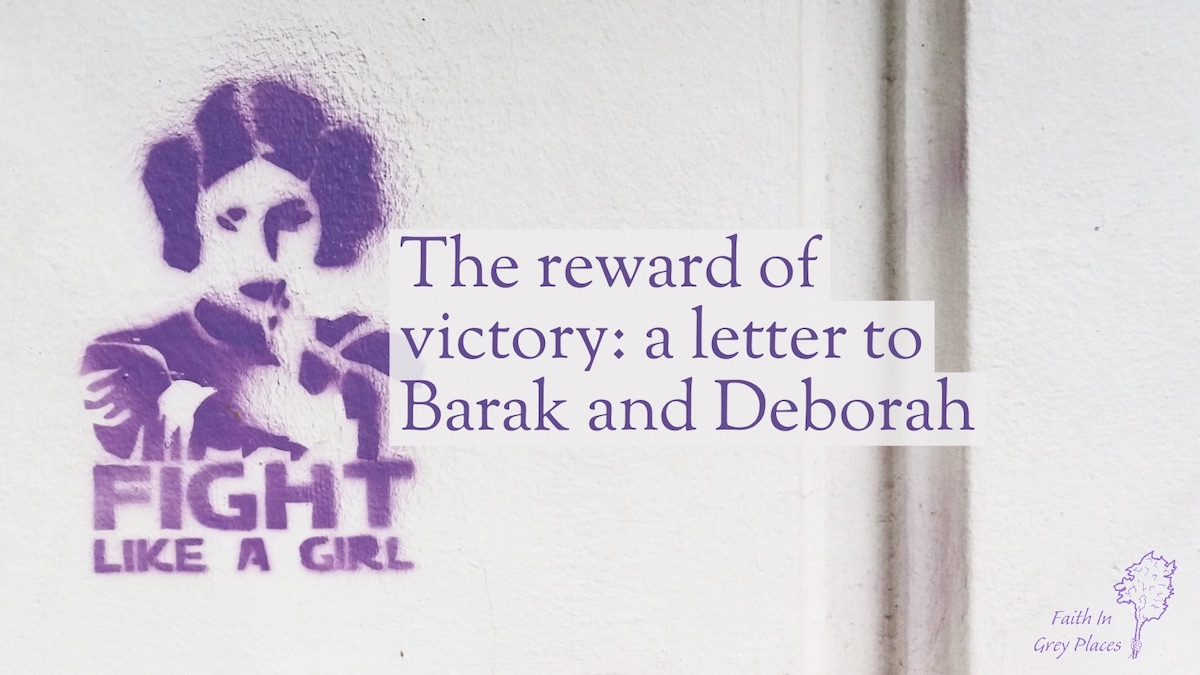 As I mentioned last week, the list in Hebrews 11 of the cloud of witnesses is not in chronological order. So even though I wrote to Gideon last week, this week’s letter is to Barak and Deborah – who came before Gideon. Their story is in Judges 4 and Deborah’s victory song is in Judges 5.

Fair warning, both chapters are a bit gory—and I do discuss war crimes in this post.

As with Gideon, the story is set in the northern part of Israel, south-west of the Sea of Galilee, near where modern-day Nazareth is. Something I’ve come to realise is that there were several places called Ramah, Bethel, and Kedesh in ancient Israel. Fun times.

We’re not sure where Deborah’s meeting place was; but it was probably a few miles west or west-south-west of the southern part of the Sea of Galilee. The area there is quite mountainous.

If you remember from last week, the valley of Jezreel is the stretch of low-lying ground that lies south-west of Nazareth and runs diagonally from north-west to south-east. The river Kishon runs along the bottom of the valley.

As I mentioned last week, it’s impossible to talk about the period of the judges without talking about war. I touched on this previously in my letter to Joshua and also when I wrote about Psalm 110 in my 2020 Christmas series.

I won’t pretend that the Israelite’s conduct in war was always ethical, and their stories are undoubtedly told with some bias. Even so, I can’t let go of the idea that sometimes fighting is necessary. The line I always remember is from a children’s book Legend of the Guardians: The Owls of Ga’Hoole:

I would never counsel rushing blindly into war, but for a cause such as the one the boy described, for a violation of peace so blatant, so powerful… …of course I’d fight! What other course to take?

I get the feeling that Sisera similarly violated the peace. In Judges 4:3 it says he ‘cruelly oppressed’ the Israelites. Also, it seems that rape on the battlefield was normalised. When Sisera is killed and Deborah sings her song of victory, she imagines Sisera’s mother asking why her son hasn’t returned home. Deborah imagines Sisera’s mother mistakenly believing that he’s late because he’s busy raping women (Judges 5:30). Deborah wouldn’t have got that from nowhere.

My point here is that, whilst I don’t want to glamorise warfare or treat it simplistically, I also don’t want to throw a dampener on the sense of victory that Deborah and Barak felt when they fought with Sisera. From what we’re told, he was a nasty guy. And many people were able to live in peace once he was gone.

Here are my letters, one to Barak and then a short one to Deborah.

It’s hard for me to read your story without a modern, even feminist lens. My instinct is to say, ‘Ha! You didn’t have enough faith, so a woman got the credit for killing your adversary!’ But that’s not really fair on you. And it’s not very feminist either. A man shouldn’t feel stigma simply because a woman completed his task.

Also, there are plenty of people in the Bible who were hesitant to follow through on God’s instruction (like Moses, Gideon, Jonah). If we pile on you, we leave no room for doubt and questioning—both of which are essential parts of the life of faith (witness, for example, Elijah, Jeremiah or Ezekiel).

I’m not sure why, but I’ve tended to assume that Jael got the credit for killing Sisera mainly because Deborah was a woman. The idea is that because you didn’t believe Deborah, as a prophetess, you needed to be shown something about women.

But there’s nothing in the text that links your doubt to Deborah’s gender. She summoned you, you came. She gave you a mission, you accepted it. As a woman, she wasn’t expected to be in the battle, but you wanted her to be with your army. None of that would have happened if you’d thought women weren’t worth listening to.

I suppose it’s possible that you doubted whether Deborah was up to the task. Maybe you thought that, as a woman, she found it easy utter oracles about warfare. Because she wouldn’t have been expected to fight on the front lines. Maybe your request for her to come with you was like a dare—a kind of ‘put your money where your mouth is.’ But even if it was, you still followed through on what she had prophesied. I don’t think you’d have done that if you weren’t at least willing to put aside any gender bias you (may or may not have) had.

Sorry that I keep focussing on the gender angle here. The thing is, there are people today who frame you as the textbook example of masculine failure when it comes to faith. The idea goes like this: it’s only when men act the way you did that God raises up women—and God does so as a last resort and reproof against men.

I just… sigh. I don’t think the author of Hebrews saw you that way at all. And I think this attitude is so damaging for women.

Your story would make just as much as sense if Deborah had been a man.

God had given you a task that no one would have counted as truly complete until Sisera was dead. He might not have been the chief oppressor, but with his iron chariots, Sisera was the big bad. And the expectation was that either you or someone in your army would take him down. That is, someone you were responsible for, someone you were leading, someone you could share the credit with.

Which means that when Deborah prophesied that a woman would finish your task, her point probably wasn’t that women were going to show men how it’s done and, by extension, humiliate men for their lack of masculinity. Rather, it was that someone outside your army would get the credit. Which might have been embarrassing for you, but it had nothing to do with sex or gender.

If Deborah had said a male foreigner would kill Sisera, the embarrassment would have been much the same.

Speaking of which, Jael was a foreigner.

To be clear, in that scenario, the embarrassment wouldn’t have derived from any idea that people of other races are somehow ‘lesser.’ Rather the point would have been—just as it was in fact—that God was going to complete the victory over your oppressors in a way that you could not control or take credit for.

Or put another way, the lesson I see in your story is not the feminist idea that women of all races should be taken seriously (though of course they should be!). But neither is it this misogynistic idea that God only uses women when men fail at masculinity. Rather the lesson is the battle belongs to the LORD.

And from that angle, I hope that when I have moments of wavering faith, that I will be like you. That I’ll be humble enough not to let pride get in the way from answering God’s call. Because at the end of the day, peace is its own reward. And it’s far greater than any personal glory we might gain in the fight to achieve that peace.

I write to you in the hope and peace of the one who has cast down the proud,

I won’t say much, but you should know that you’re such an inspiration to so many women and girls.

My generation grew up with fictional characters like the Princess Buttercup in The Princess Bride and Princess Leia from Star Wars. Then, decades later, the same actresses were seen again in other, very popular films. Robin Wright from The Princess Bride played the Amazon warrior Antiope in Wonder Woman; Carrie Fisher reprised her role in the Star Wars sequels, though this time she was General Leia.

It just… reminded me of you.

It’s not that war has any glamour. But it means a lot to see you. You were a woman who was, it seems, no stranger to the ugliness and atrocities of warfare—and the ways it costs women.

Yet you were also a person of incredible faith and able to settle disputes and command with wisdom.

I write to you in the hope and faith of the one who fights for us,

Photo by Marija Zaric on Unsplash