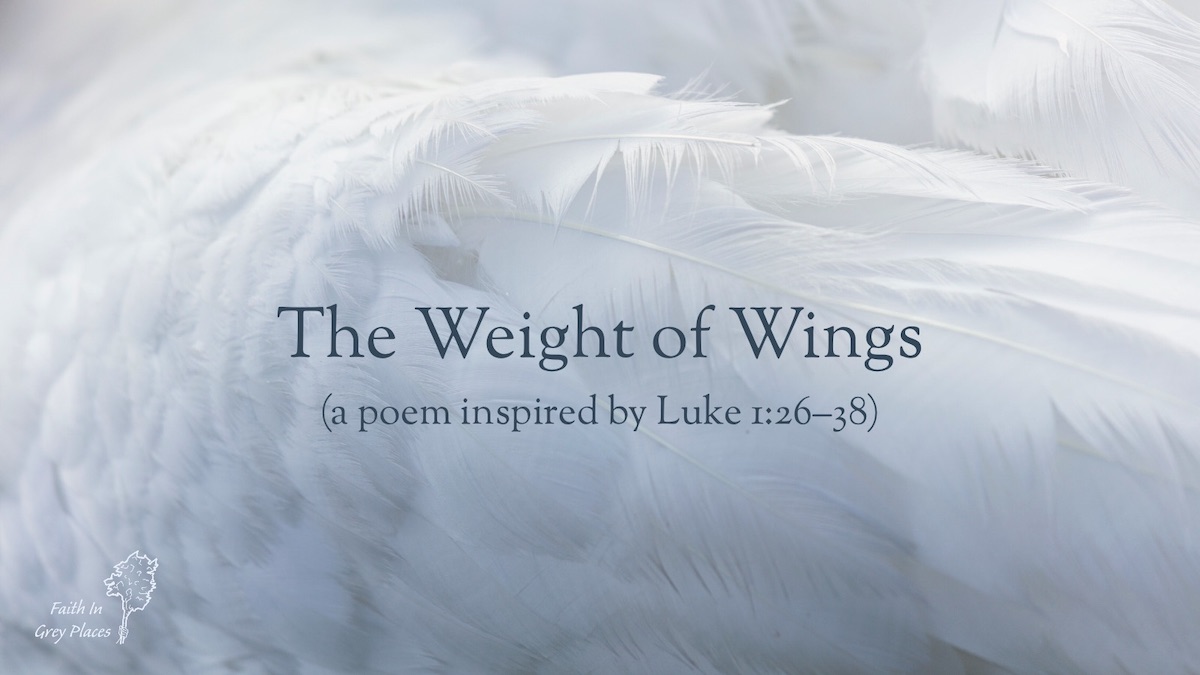 Continuing the series of poems drawing on the scripture readings in a Festival of Nine Lessons and Carols. Strictly speaking, the reading for today is Luke 1:26–35,38.

This is one of those passages that’s so famous, it’s hard to know what more can be said about it.

I started writing some notes about Mary’s age and consent, but they evolved into something else that I think would be better published on my sister-site Light in Grey Places.

Meanwhile, I still stand by what I wrote last year:

This story makes most sense to me as walking a fine line. God was meeting people where they were at, working not overwhelm them too much. But he was also being unashamed about who he was and what he can do.

For today’s poem, I thought I might consider Gabriel’s perspective. Do angels sing? Yes, but I couldn’t imagine Gabriel singing to Mary. As I pondered why, I realised the core reason is that Gabriel is a very different kind of being to Mary. He’s not human. He can’t talk to her like a loving parent, or empathise with her experience.

I imagine him as a quite formal being. Highly intelligent, and not without emotion, but concerned above all by the mission God gave him to fulfil. He’s aware of his own strength and power, but acutely conscious that this vulnerable young girl is the one who’ll be great.

Meanwhile, I wanted the poem to speak to Mary’s experience as one on the cusp of adulthood.

The Weight of Wings

“Tread lightly,” you said,
And I did.
But still she heard me touch the earth.

“Greet her,” you said,
And I did.
But still my words seemed strange to her.

“Reassure her,” you said,
And I did.
But still her eyes were poised upon me.

She saw my feathers ruffling at the softest breeze,
And yet she knew my wings were heavy.
The contradiction didn’t seem to trouble her.

“Tell her,” you said,
And I did.
But still she examined my words.

“Explain to her,” you said,
And I did.
Though I still long to look into these things.

“Listen to her,” you said,
And I did.
And I shouldn’t have been surprised, but I was.

I did everything you asked,
And now my wings are tired.
But, as you’ll know, that’s the cost of treading lightly.

Photo by Nico Frey on Unsplash