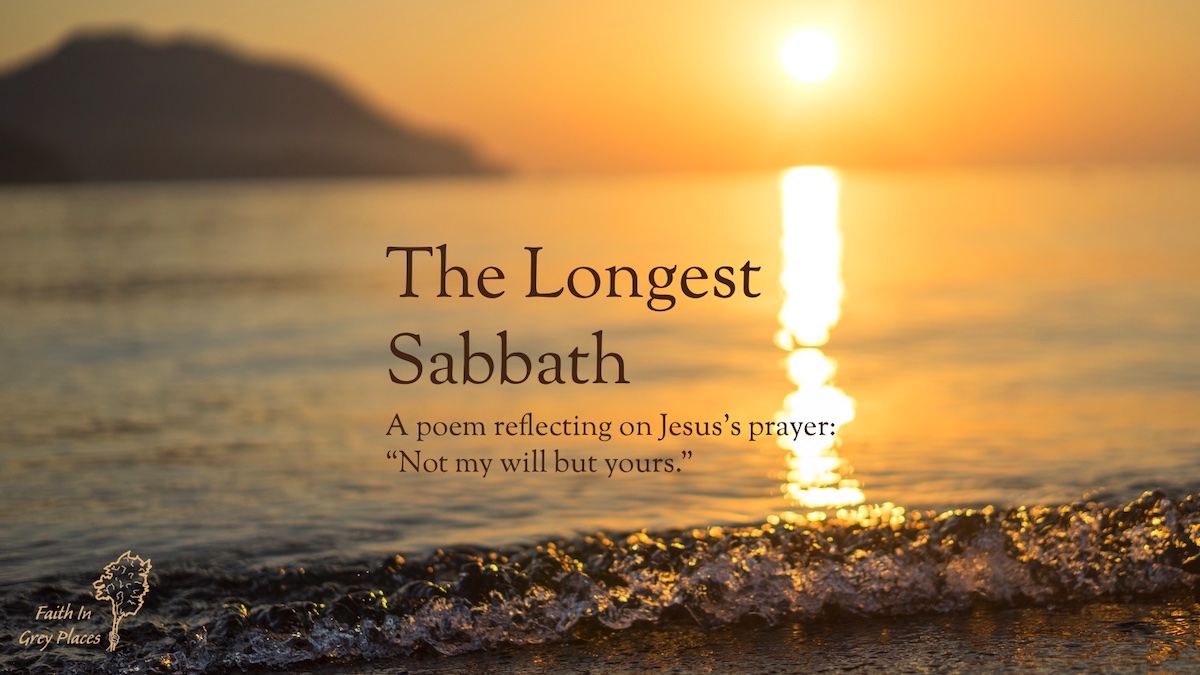 I’ve written these poems starting from a blank slate, meaning the end result often surprises me. This one… this one really surprised me. In short, I started out wanting to write about Maundy Thursday, but ended up writing something peaceful set on Holy Saturday. I also cried a lot while I was writing it (but in a good way, I think?)

I wanted to reflect on Jesus’s agency and will, when he prayed in the garden of Gethsemane, the night before his crucifixion. He was so overwhelmed with sorrow, knowing what was about to happen, that he asked God (the Father) if it was possible for him not to suffer. But, having prayed this, also prayed that the Father’s will be done, not his own.

(I should also briefly caveat that although Christians refer to God the Father as, well, Father, God is not human and indeed beyond gender. In that sense, God is both our ultimate father and mother.)

It’s easy to underappreciate how difficult it is to understand the relationship between the three persons of the Trinity: the Father, Son, and Holy Spirit. They are a paradox: each the other and yet not the other. A collective union of one spirit and will, and yet each person separate and distinct in their own right.

(And I’ve probably said something untrue in that paragraph!)

This adds difficulty to how we understand this prayer of Jesus.

It’s long troubled me how this story has been used to justify troubling forms of hierarchy and submission, even though Jesus is co-equal with the Father. But this moment is one of the most extreme that Jesus ever experienced. It’s not typical of his relationship with the Father – and yet despite being so pressurised, it’s one in which Jesus even questions the Father. You only question someone’s big grand plan if you have a secure and healthy relationship with them. So I think it says a lot that Jesus felt able to ask this question.

I would also say that God’s great plan of salvation was one which Jesus co-owned with the Father. It was not something imposed upon him, or something he was recruited into. This was as much his plan as it was the Father’s (and the Holy Spirit’s). Human examples of “submission” often don’t have that, and can’t be compared.

Even so, what do we make of his words: “Not my will, but yours?”

For sure, what the cross achieved is all of these things. But that’s different. So I find it helpful to distinguish between what God wants, and what he wills.

The next question is whether Jesus’s will was different to the Father’s. Again, I don’t think we should see this as Jesus setting aside his agency, or allowing the Father to override him. I think we nudge closer to the truth if we think of Jesus as asking for a more informed perspective to help him make his own decision to go to the cross. At that particular point in time, Jesus was encased within spacetime, the Father was not.

Jesus wanted to know – perhaps needed to know – if another way was possible. So he reached out to the one he knew he could trust absolutely. The one to whom he went on Holy Saturday.

I know I usually put YouTube links at the end, but this time I want to offer a clip from the film The Miracle Maker. It’s 3.5 minutes long, but it’s the first 1:45s that I’m mainly thinking of. It’s of Jesus praying in Gethsemane.

(Pause for a few moments before reading the poem. If you’re anything like me, you might need some tissues. The poem is told from Jesus’s perspective.)

I sit on the sandy white shore
while crystal waves caress my feet
and the orange sun lingers above the water.
The day will not set without your command
Yet you are waiting on me,
And right now, I’m enjoying my time.

I love that you sit with me,
have stayed with me, we three,
in this small pocket of paradise.
I came to you with the sorrow of Job
Yet your long silence has brought me
all the joy of Creation Week.

You trace the contours of my hands
As though some mystery hides within their lines
That not even you can fathom.
Do you still wonder that I died?
Do you still marvel that I did not falter,
But finished everything you gave me?

If I didn’t know you better
I would think you were shy,
Abashed for willing something
So full of grief, that I would ask
If there was any other way.
But I know you truly love me.

I sift the grains of sand between my fingers
And remember the riches of your promise.
Many will rejoice in these last days.
This, this is what we desired
When my spirit was heavy with sorrow
And I couched my will within yours.

And now you hold the sun above the waters
Lest our long Sabbath end.
For this time is wholly mine.
That is, until my curiosity unfurls
And gradually I begin to wonder,
What will they say when they see me?

“I am ready, Father,” I say,
And you look at me with your great delight
As if I had surprised you.
The sun bows below the horizon
And dusk falls, soft like a cloak,
Shrouding me for my return.

In case you wondered… yes, I was thinking of Tolkien

At the end of The Lord of the Rings: The Return of the King Frodo leaves the Shire and passes over the sea into the West, to the undying lands. It’s essentially paradise in J.R.R. Tolkien’s universe. The quote is this:

And the ship went out into the High Sea and passed on into the West, until at last on a night of rain Frodo smelled a sweet fragrance on the air and heard the sound of singing that came over the water. And then it seemed to him that as in his dream in the house of Bombadil, the grey rain-curtain turned all to silver glass and was rolled back, and he beheld white shores and beyond them a far green country under a swift sunrise.

Photo by Raimond Klavins on Unsplash