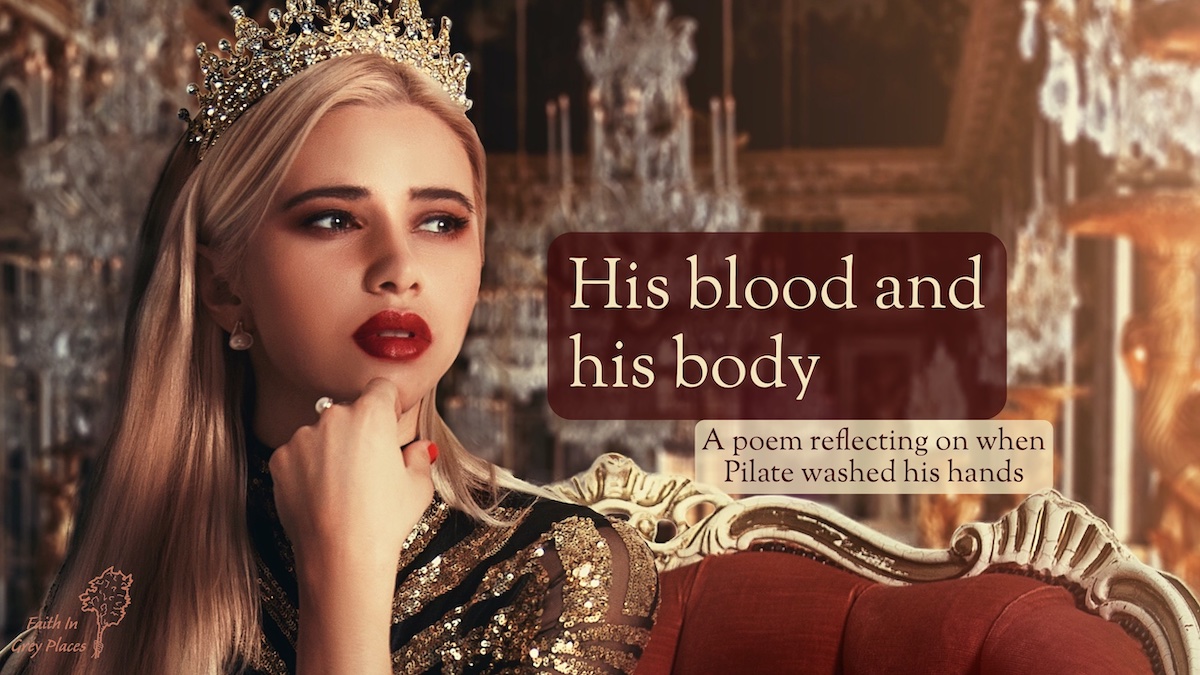 Last week I wrote that I’ve written these poems starting from a blank slate, meaning the end result often surprises me. Again, this one surprised me.

As a person of some power, I imagine Pilate was not used to having his hand forced, or feeling like he wasn’t in control. But it really comes out in the text that he was unable to intimidate Jesus, or manipulate the crowd, or even contain them without giving them what they demanded.

I’ve often found it curious that his name is in the Nicene creed and I’ve wondered at how he spoke more truth than perhaps he realised when he put the sign above Jesus’s cross: Jesus of Nazareth, the king of the Jews.

Matthew’s account includes a detail: that Pilate’s wife sent him a message saying “Don’t have anything to do with that innocent man” (“just man” in the KJV). For this poem, I thought I would lean into that, wondering how she might have felt after Jesus’s death. I don’t imagine she was naive about Pilate’s position or the brutality of the Roman Empire. So I found myself asking what would have shaken her? What would have stayed with her?

Curiously, I discovered parallels and inversions in the character of Lady Macbeth, from Shakespeare’s Macbeth. So if you wonder where the archaic language is coming from — it’s that. And the KJV.

His blood and his body

Tell me, husband,
When I sent word to you, when I said,
“Have nothing to do with this just man,”
What did you imagine my words to mean?
Did you think me too full
Of the milk of human kindness?
Did you think me brainsickly,
My heart too white, too sexed with woman’s frailty?
I was born with the noble strength of Rome
And never was I ashamed of it.
But while I revered the gods
You bent yourself to the multitude.

Were you drunk when you said,
“I have the power to crucify,
And the power to release”?
You think your tongue innocent as a flower.
“I find no fault in this man,”
“I find no cause of death in him.”
Yet for all your words, he is dead,
And who would have thought the man
Had so much blood in him?

Go, buy all the perfumes of Arabia
They will not sweeten your hands
Of his blood and his body
That lies wrapped without ceremony.
You spurned the gods in killing him,
They’ll not play fools to your whitewashing
And their wrath will not pass over you.
For they, not I, are the arbiters of truth.
You refused to hear me before, so now
Fold up my words and seal them
Then I will return to my curtained bed,
Never to argue or dream again.
For you, husband, have murdered sleep,
And that is the end of the matter.

When I survey the wondrous cross

This is easily one of the greatest passion hymns and it was originally written with five verses, not four. This is an instrumental video that I recorded last Easter and I thought it worth sharing again.

Photo by Alice Alinari on Unsplash