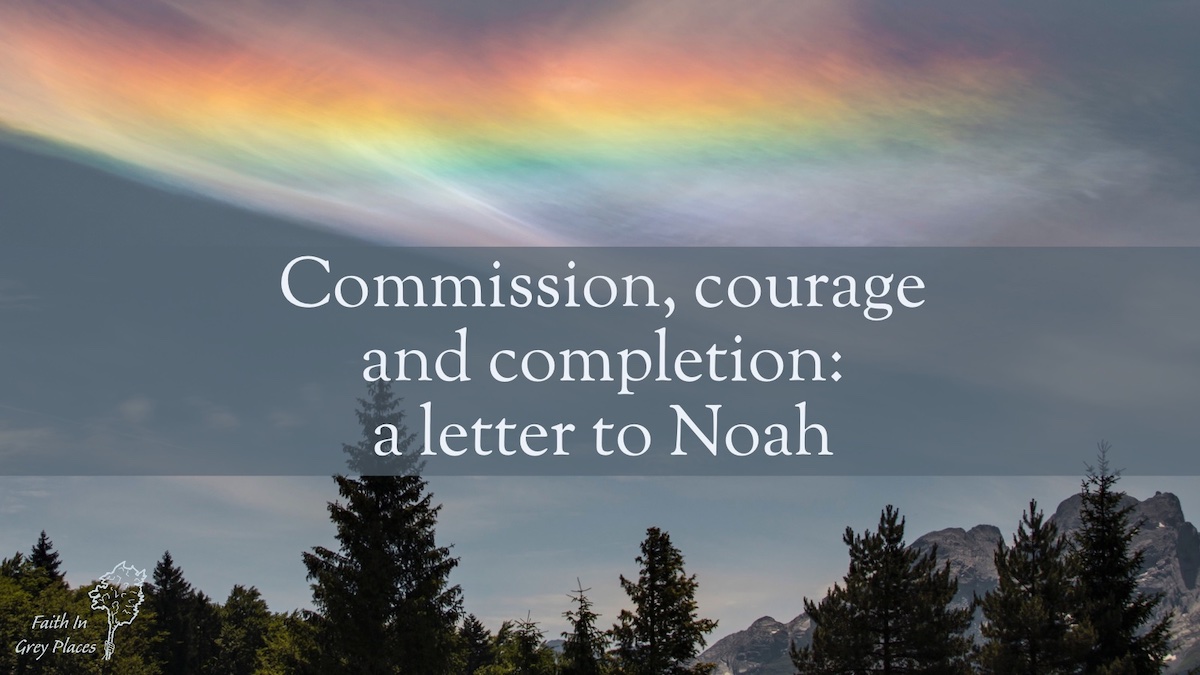 This is the third in the series of letters I’m writing to people listed in Hebrews 11 as the “cloud of witnesses” who went before us. Today’s is to Noah. The story of him and of his ark is in Genesis 5:28–9:17.

By faith Noah, when he was warned about things not yet seen, with reverent regard constructed an ark for the deliverance of his family. Through faith he condemned the world and became an heir of the righteousness that comes by faith.

Your story certainly captures the imagination. I grew up with sing-along stories and songs about you, the ark, the animals and all that rain. My choir was actually on TV once singing “Captain Noah and His Floating Zoo” by Michael Flanders and Joseph Horowitz. But since then, it seems many of us have grown tired of hearing the flood spoken of like a children’s story.

For myself? I don’t know what actually happened, or when, but the idea of a great flood is found in several ancient cultures around Mesopotamia. You get the idea something happened and I can understand the need to make sense of it. That being the case, I much prefer Genesis over the diluvian myths of the Ancient Near East.

I’d rather believe that sin leads to destruction than have a god who hates humans simply because they keep waking him up. I’d rather have one God whose concern lies with all people, living and dead, than a pantheon where the lesser gods have to outwit the more powerful and less benevolent ones. And I’d much, much rather have a story that ends with a promise it’ll never happen again (so it’s fine to have plenty of kids!) than one where the gods invent barrenness to stop the population from becoming a nuisance again.

Wow, this stuff gets dark.

(God talks to himself in the Genesis account—did he share his thoughts with you? Did you share your thoughts or ask questions?)

I’ll admit, in your story, I see something that I experience in the relentlessly awful in the reality of sin. My husband once said, “Knowing that God gets angry is what gets me up in the morning.” He didn’t say it in fear, rather a weary frustration that there is so much greed, injustice and indifference to reckon with.

From that angle, I can understand why the author of Hebrews said you condemned the world.

That said, I also want to overcome evil with good, to see mercy triumph over judgement. Whichever way you look at it, it’s hard to swallow the ethics of resetting the world. Was the idea was more “normal” in your time?

I think this is why, today, more people have issue with God’s role in this story than yours. I mean, if a deity—good or bad—tells a mere mortal to save themselves and their family from impending doom, what choice do they have? And it’s not like you were told to harm anyone, just build an ark.

But of course, fear is not faith. If you had thought God was unjust you wouldn’t have been acting in faith when you built the ark—you’d have been trying to save your skin. And I can sympathise with someone doing that in a coercive context, but I wouldn’t call it an inspiring example. I wouldn’t look at your life as an important testimony about what is true.

But I believe your story is true in some sense. Even if it was told very concisely from a very different worldview.

The bit that always gets me is God closing the door of the ark. I dunno, I just find something sacred in that. That God completes. That he secures. It’s not just us in our frailties and haphazard attempts to get things right. How did you feel when you were shut in? Sheltered? Claustrophobic? Holding your breath?

On some level, it’s that moment that I often find myself searching for. The point where I’ve done what I’ve done and it’s out my hands. There is nothing more to do but to wait. (Of course, there was still a lot more in your case—you had an ark full of animals to care for and a family to keep sane. Not to mention getting off the ark and restarting your lives.)

The faith I see in your story, that I want to emulate, is not so much doing something that might look absurd, not the willingness to take action when the world is in chaos around you—though those things have their place. It’s the courage to follow through on something so much bigger than yourself, so inescapably beyond your skill set, because you believe that the one who commissioned you is good and will bring your work to completion.

I can so easily picture myself looking at the ark’s early rib cage, wondering how it could ever become what it needed to be. I can picture myself looking out over the Arabian Sea and the Indian Ocean, overwhelmed by the thought of a tsunami. But what I want is to look at my hands and to see them doing a good work. Because I believe that’s how we’ll see the olive branch, the dry ground and the rainbow of God’s promises.

I write to you in the peace and hope of the one who will give rest to all who labour in faith,

Photo by Stephen Leonardi on Unsplash