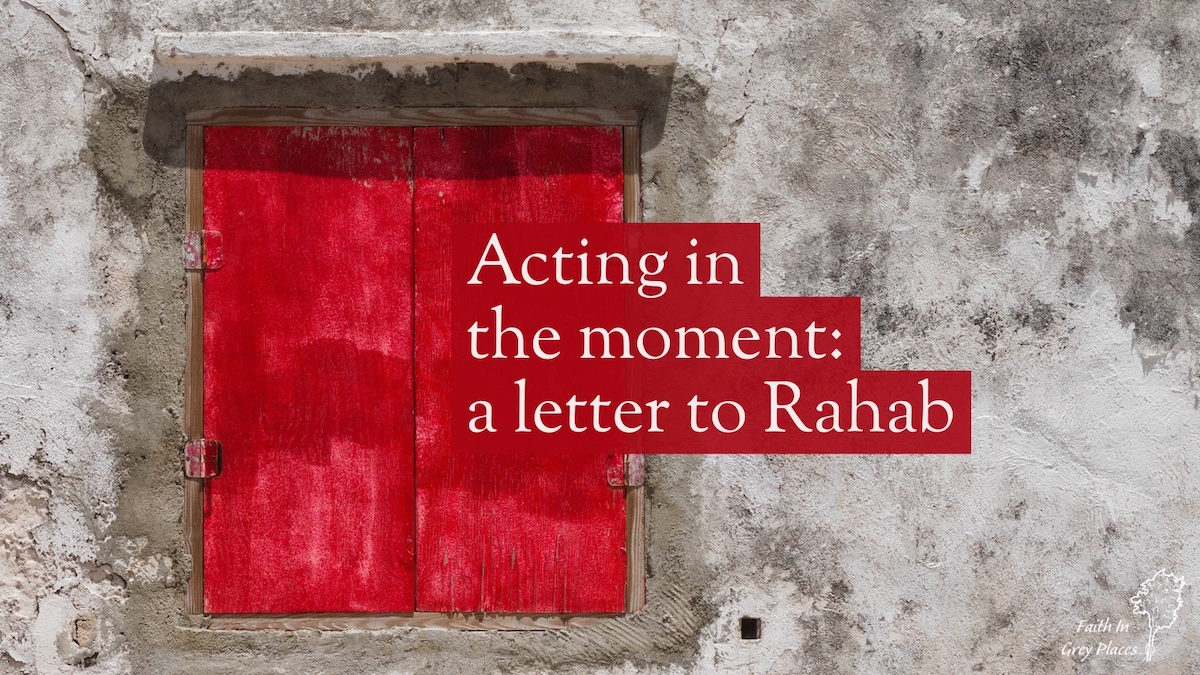 This is the last (for now) in the series of letters I’m writing to people listed in Hebrews 11 as the “cloud of witnesses” who went before us. I will probably return to Hebrews 11 in the new year to cover those the author said they didn’t have time to go into (Gideon through to Samuel).

Rahab was a Canaanite and a prostitute who hid two of Joshua’s spies when they came to the city. The story is in Joshua 2, Joshua 6:17,22–23.

In last week’s letter, I touched on questions behind the conquest of Canaan, including how Rahab’s story may have been written in at a later time to challenge exclusionist ideologies. For the most part, I leave all that behind in this letter.

Her story is that she recognises that God is with the Israelites, helps Joshua’s spies, strikes a deal to save herself and her family, and lives among the Israelites afterwards. Matthew’s gospel (Matthew 1:5) records her as being the mother of Boaz and hence an ancestor of both King David and Jesus.

By faith Rahab the prostitute escaped the destruction of the disobedient, because she welcomed the spies in peace.

There are few people in the Bible who I am utterly unapologetic about. You’re one of them.

Growing up, I was told that Joshua’s two spies stayed with you because they didn’t want to attract attention. Of course, they did – but what my young teenage self needed to know is that they weren’t trying to nab a lads’ weekend away.

The thing I loved about your story was how clued up you were about what God had been doing. You knew about the parting of the Red Sea (technically, the sea of reeds), even though that would have been 40 years earlier. Was the rumour mill still running or had your parents told you stories?

I loved the feeling that when the spies came you recognised what was coming, what was going to happen and what you needed to do to save your family. And you did it.

Since then, the biblical authors recorded you as one of David’s and Jesus’s ancestors. Your faith is commended not only in the book of Hebrews but also the book of James.

Oh, I know, your story was written by the victors. They didn’t ask questions about the ethics of betraying your people. They didn’t debate the justice of war. If you’re on the winning side then, so far as they were concerned, God was with you and you’re on the side of right. While the Old Testament narrative does get a lot more nuanced, the text offers no moral ambiguity about Jericho.

And I think this is where your story gets even more interesting. On the surface, the message is clear: God had given the Israelites the city, anyone who tried to stand in the way of that would perish. It’s kind of like Sodom and Gomorrah, or if we take John Bunyan, the City of Destruction in Pilgrim’s Progress. The question for me is: if you had the eyes of faith to see what was coming, why hadn’t you left?

I’m not accusing you here. Gosh, I know of many people in coercive circumstances who do not leave. Not because they don’t want to, but because they don’t know how they can. Did you feel trapped? You seem the kind of person who’d be able to hatch their own exit plan. Were you concerned for your family? Did you think you wouldn’t be able to persuade them to leave?

I used to read the book of Joshua believing that the Israelites were waging a just war—albeit with a mandate that has never been repeated. At that time, one of the things that went through my head is that everyone got an extra 40 years’ grace to change their ways and separate themselves from all the corruption that was going on. I believed, and to be honest I still do, that God never brings judgement without warning.

My relationship with the biblical account is now much more complicated, but there is still the question of why you were there, in Jericho, when Joshua sent the spies.

Maybe some people had left. Maybe you would have. Maybe events sometimes come upon us in ways we don’t expect and we don’t get the luxury of analysing how we got to where we are. We can only react and hope that our actions are the best ones we can make. Maybe God sees the quirks in our lives and looks to bring good out of them.

I love your story because it reminds me not to judge by appearances. That the outsider can have faith just as strong as a founding father. I love that your identity is intertwined with your story. And I hope that I can recognise the moments of my time just as lucidly as you did, and that I can act in them just as unwaveringly.

I write to you in the peace and hope of the one who has broken down all divisions,

Photo by Stephen Pedersen on Unsplash