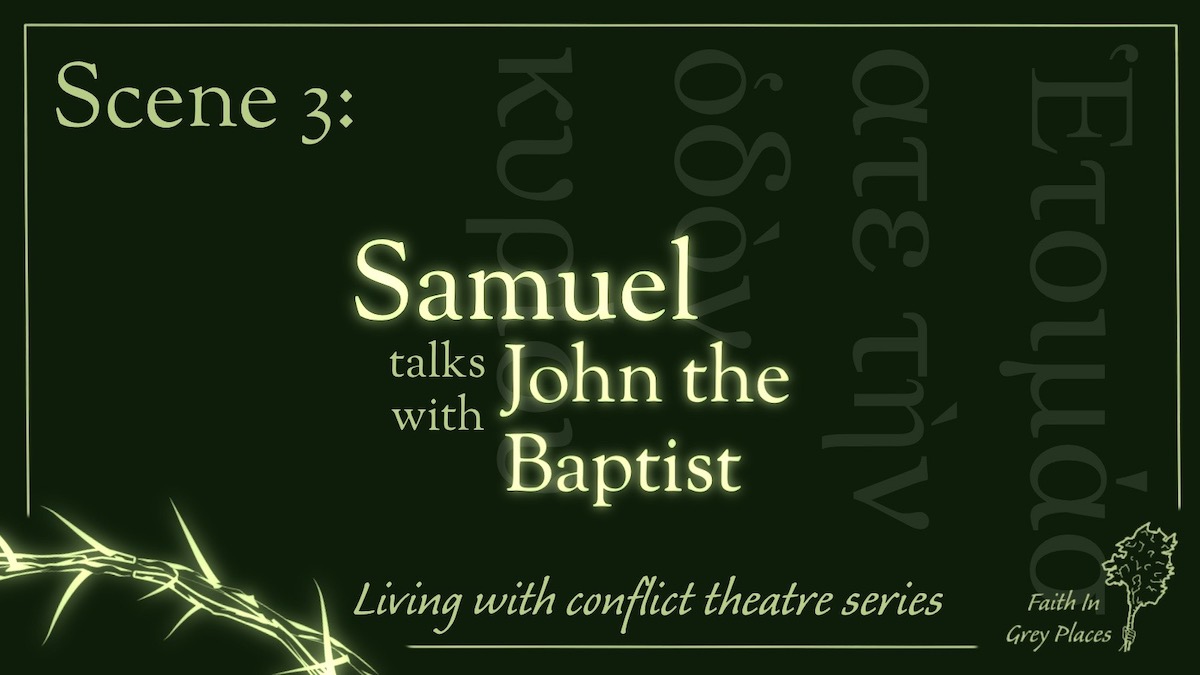 In this, the third scene, he goes to visit John the Baptist, whose ministry of repentance helped people prepare for the coming of Jesus.

Samuel discovers that John has chosen to make his dwelling a flat expanse of desert. John wryly recounts the things people say to him when they interrupt his solitude.

Not gonna lie, this script was very definitely inspired by the gospel accounts of John the Baptist, but its core image drew from a video I recently watched on YouTube.

This time, it was In Search of a Flat Earth on Dan Olsen’s channel Folding Ideas. In it, he demonstrates the curvature of the earth by filming a 7km distance across a lake. When the camera lowers, the shoreline features at the other end of the lake disappear from view; even a tour boat disappears from view. When I first saw the footage, I found it quite breath-taking; if you want to see it for yourself, that part of the video starts here at 10:10.

All that said, the video isn’t really about science. It’s about people who believe the earth is flat. And then at 37 minutes Dan flips the topic and talks about people who believe in QAnon. If you have a spare hour and fifteen minutes, it makes for an excellent evening’s viewing. (And if you have a spare 2 hours and 20 minutes, you really should watch the viral one he made about NFTs.)

Before I saw Dan’s video, I was already thinking that this duologue would be set in the desert. I thought about borrowing from the landscape of the Jordan Valley (Rift Valley) and the images of Isaiah and/or Ezekiel. But none of my ideas gained traction until I imagined John in the middle of a vast expanse of flat desert.

Once I had that, the themes of Dan’s video suddenly suggested themselves, namely knowledge and misinformation; both are deeply relevant to the series theme of ‘living with conflict’.

This is a gentle sketch with dashes of humour thrown in. And it builds on the previous one in the series, where Ezekiel said he wanted to be a mathematician. I hope you enjoy it.

Length: 2,400 words
Actors: 2 adult males
Genre: Drama. Duologue.
Advisory notice: None.
Fun fact: According to Wikipedia, in standard atmospheric conditions, for an observer with eye level above sea level by 1.70 metres (5 ft 7 in), the horizon is at a distance of about 5 kilometres (3.1 mi).

And now that I’m dead, and I know what I know now, it feels like I never had any true comprehension of God’s perspective. (BEAT) Now, that’s not entirely fair. But it’s very easy to feel dwarfed by all the things you don’t know.

And then they quote one of the gospels at me and say, “But it’s what you preached, isn’t it?” And I say, “Well, sort of.”

Then they look around and realise that we’re not in the middle of the rift valley and there is no river Jordan.

SAMUEL:
What do they say then?

JOHN:
Some of them say they’re not sure they’d really want an earth where there are no mountains or valleys. At which point I say, “Of course not. Isaiah’s prophecy was a metaphor about how God humbles the proud and lifts up the oppressed.” Then they go quiet and smile, and go on their way.

Others ask if the rows of palm trees are an allusion to Jesus’ entry into Jerusalem.

JOHN:
Sort of. Then they start a whole discussion about processions and highways and what it might look like when Jesus returns. Will we be in the procession behind him? What exactly will happen? Will all of humanity see it happen simultaneously? And gradually they realise that despite all the prophecies we have, they don’t really know what the second coming will look like.

SAMUEL:
And what do other people say? JOHN:
Then we get those who say, “It’s very flat isn’t it?”