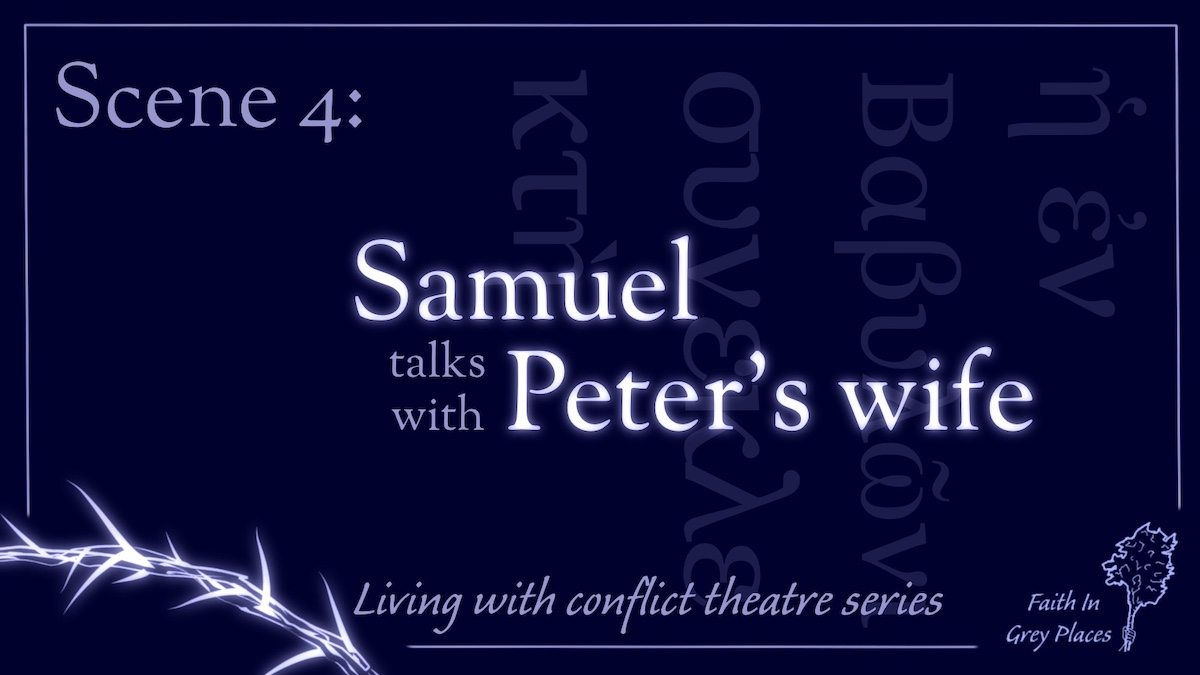 In this, the fourth scene, he meets Peter’s wife, Abigail, inside a heavenly version of St Peter’s Basilica. They discuss the hazards of fame and the role of art in helping people approach God.

I thought this duologue would be with Paul. Last week I realised Peter was a better candidate. Then this week, I saw a chance to introduce another female voice by bringing Samuel to meet with Peter’s wife instead.

There is much in the Petrine literature that I could have explored here, especially around the themes of identity, suffering and household codes. But that wasn’t where the duologue wanted to go. Instead, I ended up writing about the themes of worship and encountering God through images. I may end up revising it at a later date, but for now, here it is.

A few background notes and links for further reading:

However, her name is not recorded anywhere, so far as I can tell. I’ve decided to name her Abigail, a Hebrew name meaning ‘my father rejoices’.

There’s a short commentary about her on Bible Gateway. Some argue that Peter was widowed before the ministry of Jesus, given that Peter’s wife is not mentioned in the gospel accounts but her mother is. However, Clement of Alexandria records in book 7 of the Miscellanies (paragraph 452) that she was martyred shortly before Peter was.

For the purposes of this dialogue, I’ve taken the view that Peter had one wife and she was indeed martyred.

Another New Testament reference that shows Peter was married is at the end of his first letter, 1 Peter 5:13: “She who is in Babylon, chosen together with you, greets you, and so does Mark, my son.” (Here, “Babylon” is a reference to Rome.) The reference to Mark shows he was married. I’ve also speculated that the woman referred to here was Peter’s wife. For further reading on the translation of this verse and who/what “she” is, there’s a useful article by Margaret Mowczko on her blog.

ABIGAIL:
(SIGHS) Sometimes I think fame is a disease that corrupts everything and everyone it touches.

You remember the bronze snake that Moses made in the desert?

SAMUEL:
Yes; there was a plague of venomous snakes in the Israelite camp, but those who were bitten could look to the bronze snake and live.

ABIGAIL:
Yes. Now, God commanded Moses to make that snake. And it saved people’s lives. But later generations worshipped it and it became detestable.

SAMUEL:
And King Hezekiah destroyed it.

ABIGAIL:
Exactly. I’ve seen this pattern time and time again. A good thing is made. It does good. Then it becomes famous. Then it is worshipped. And then it’s no good for anything.

As for this church was built to be famous and to attract worshippers. I know it was also, arguably, built to honour God and facilitate the worship of God. But… (SIGHS) with everything Peter understood about worship and what it is to approach God… I wasn’t going to let the conversation take place without me.

We both saw the early centuries unfold and weren’t able to intervene directly, and that was hard enough.

SAMUEL:
(GENTLY) You did pray though, didn’t you?