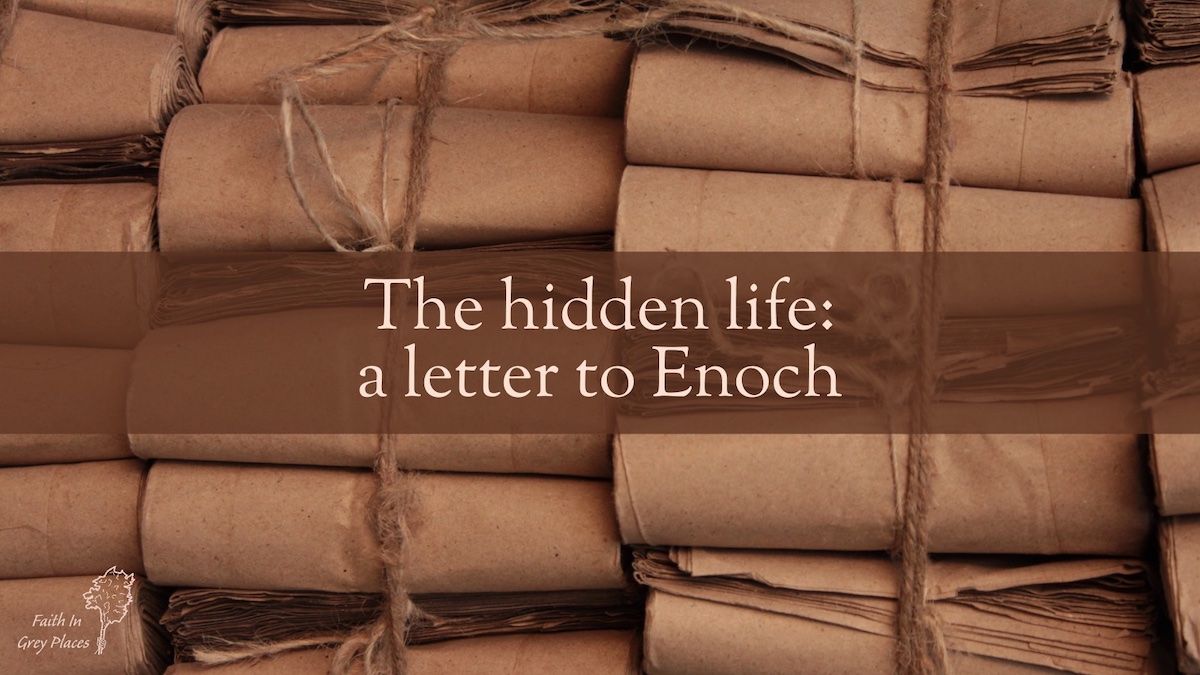 This is the second in the series of letters I’m writing to people listed in Hebrews 11 as the “cloud of witnesses” who went before us. Today’s is to Enoch. His story is in Genesis 5:18-24. Note that this Enoch was descended through Seth and was the seventh generation (Adam being the first) recorded in the book of Genesis. He’s not to be confused with Enoch son of Cain!

By faith Enoch was taken from this life, so that he did not experience death: “He could not be found, because God had taken him away.” For before he was taken, he was commended as one who pleased God. And without faith it is impossible to please God, because anyone who comes to him must believe that he exists and that he rewards those who earnestly seek him.

Sorry, but we didn’t talk about you in Sunday School. Or church. Or our Bible study group. In fact, most of what I know about you, I learned from Wikipedia.

Or rather, I learned about the idea of you and the ideas people have attributed to you over the ages.

To be fair, you’re a blank slate for the imagination. You walked with God and you didn’t see death. No other details provided, just a mountain of questions. Where did you walk with God? What was it like? What did you talk about? Did you see heaven? Did you meet angels? I’m guessing the spectacular ending and the lack of other details meant writers over the ages got creative and attributed their works to you.

I was taken aback. OK, so the Book of Enoch isn’t canonised for nearly all church denominations, but is that what readers most need to know as they study the book of Jude? In that moment, I didn’t learn about God, but I did learn about boundary patrolling.

I find it curious that Jude quoted your prophecy to highlight active unbelief—the kind that destroys lives. Because of course the author of Hebrews mentioned you to highlight the importance of faith; if we don’t on some level believe God exists, we can’t search for him and come to him.

And yes, I know that the whole topic of faith is more complicated than that. For all our talk about searching for God, it’s also true that God searches for us, and we have this great paradox of whose agency is at work here. But still, I get the sense that you searched for God, you found him and you walked with him. And wow, that’s a good story any day of the week.

As the book of Sirach reminds us, there aren’t many people who’ve been taken into heaven. I can name only three others: Moses, Elijah and Jesus. And Jesus is a special case because, well, he actually died. It makes me wish we knew more about your life. But maybe the lack of information is deliberate. Maybe it’s not about knowing what your great deeds moments of faith were. After all, many people’s names have been undeservedly separated and erased from what they gave to this life. Maybe for us your brief life summary is a reminder that, for all its depth and mystery, faith can be simple. That if we walk God, everything else follows—and it just might be more wondrous than we can imagine.

I look forward to meeting the “real you,” whoever that is. You can tell me how it feels to have strange parables and apocalyptic stories written in your name. You can tell me whether you really did live 365 years as the book of Genesis says you did, or if the author was using some kind of literary convention. Were you ever bothered by the thought that you might not make the most out of your years? What would you have wanted people to know about you?

Ultimately, we cannot control the stories that people tell about us and our lives. But we do know that God sees us and that, at the right time, he will reveal history. Perhaps then your life is like that of an apocalyptic scroll: it has been sealed up and waits to be opened. At the right time, the great Lamb will open your story and make it known. I look forward to that.

I write to you in the peace and hope of his everlasting and good Name,

Photo by Ananya Mittal on Unsplash