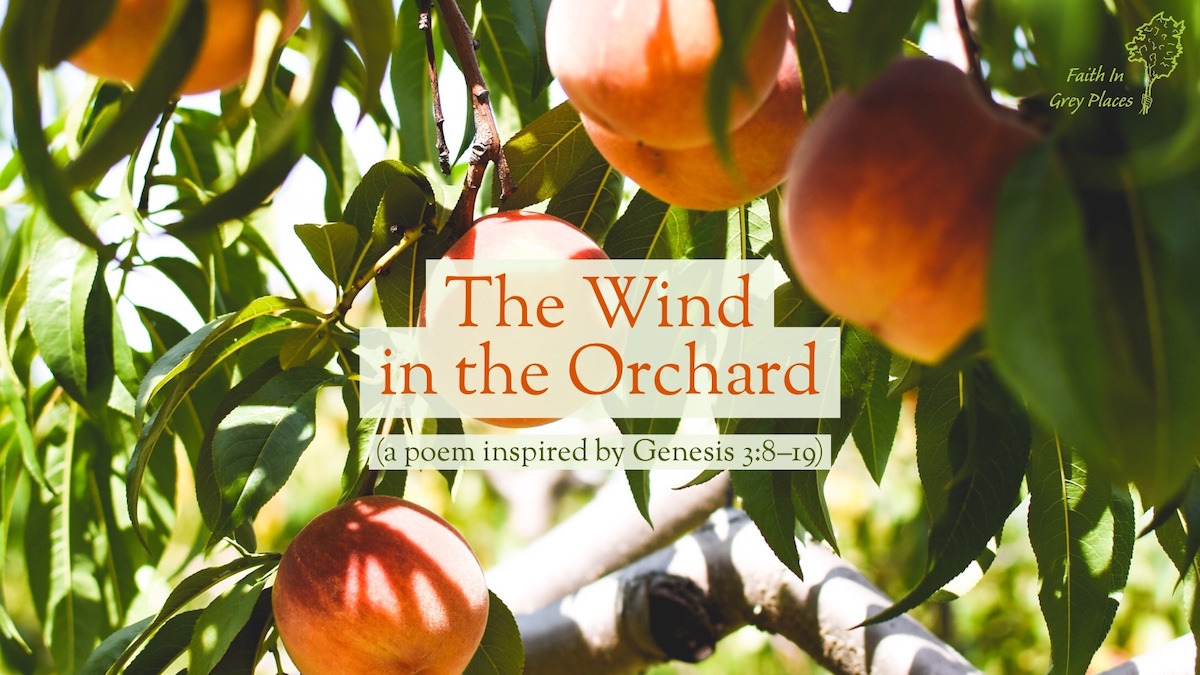 This is the first in a new series of poems drawing on the scripture readings in a Festival of Nine Lessons and Carols.

The format of this service has its origins in the 19th century with the Right Rev. Edward White Benson, who became the archbishop of Canterbury. In 1918, an army chaplain, Eric Milner-White, introduced it to King’s College chapel, Cambridge. It was hugely popular and has been broadcast on the BBC nearly every year since (in 2020 the service was pre-recorded without a congregation).

I grew up with carol services heavily influenced by Nine Lessons and Carols and I do have a soft spot for them, even if some carols have worn very thin and tired for me.

In this series though, I thought I’d see what it would be like to make poetry from the scripture readings.

The first reading is Genesis 3:8–19 – which shows how short the readings are!

Genesis 2:35–3:24 is the story of what gets called “the fall,” the explanation for how God’s good creation described in Genesis 1–2 became corrupted with sin and suffering.

It’s an ancient story and remarkably short, which makes it fertile ground for all manner of debates in the church regarding the nature of suffering and gender relations. This post isn’t really the place for those but if you’re interested in some background reading, you could look at Marg Mowczko’s blog:

There are a few things that I noticed reading the story this time.

The time of the day: in verse 8, it says that God was moving about in the garden at the ‘breezy time’ of the day. According to the NET, it could actually be referring to the afternoon when it gets hot and the sun is beginning to decline. Another possibility is that this is a wind of a storm.

Adam’s response to God: in verse 12, there’s a clause thrown in, to identify who Adam means when he refers to “the woman.” That clause identifies her as the person God gave. The implication is that Adam is blaming God for what he did.

There are various ways that prophecy has been understood. The translation I heard in carol services was that the serpent will “strike” the offspring’s heel, but the offspring will “crush” the serpent’s head. Actually, the Hebrew verb is the same in both phrases. Also, as Marg Mowczko writes, there are difficulties in knowing whether the offspring referring to here is singular or plural—hence the title of her post.

But even with that, a common Christian interpretation is that this refers to Jesus and his ultimate victory over evil and sin.

And I chose to run with that in this poem.

The Wind in the Orchard

When the wind came through the orchard
But the trees were barely swayed,
When their fruit hung bronzing in the sun
Unshrinking from the walking One,
We hunched within the shade.

He asked why we were hiding,
Though he knew that we were bare.
He asked if we had taken taste
Of knowledge from the tree he placed
And warned us to beware.

Because we had ignored him,
A curse lay on the ground,
With thorns and sweat I’d harvest grain,
And she would labour with great pain,
Desiring, but kept down.

Then the wind came through the orchard,
Throwing dust across the field,
The serpent’s food, our final shroud.
And yet, I glimpsed within that cloud,
A servant’s striking heel.

Photo by Jordan on Unsplash