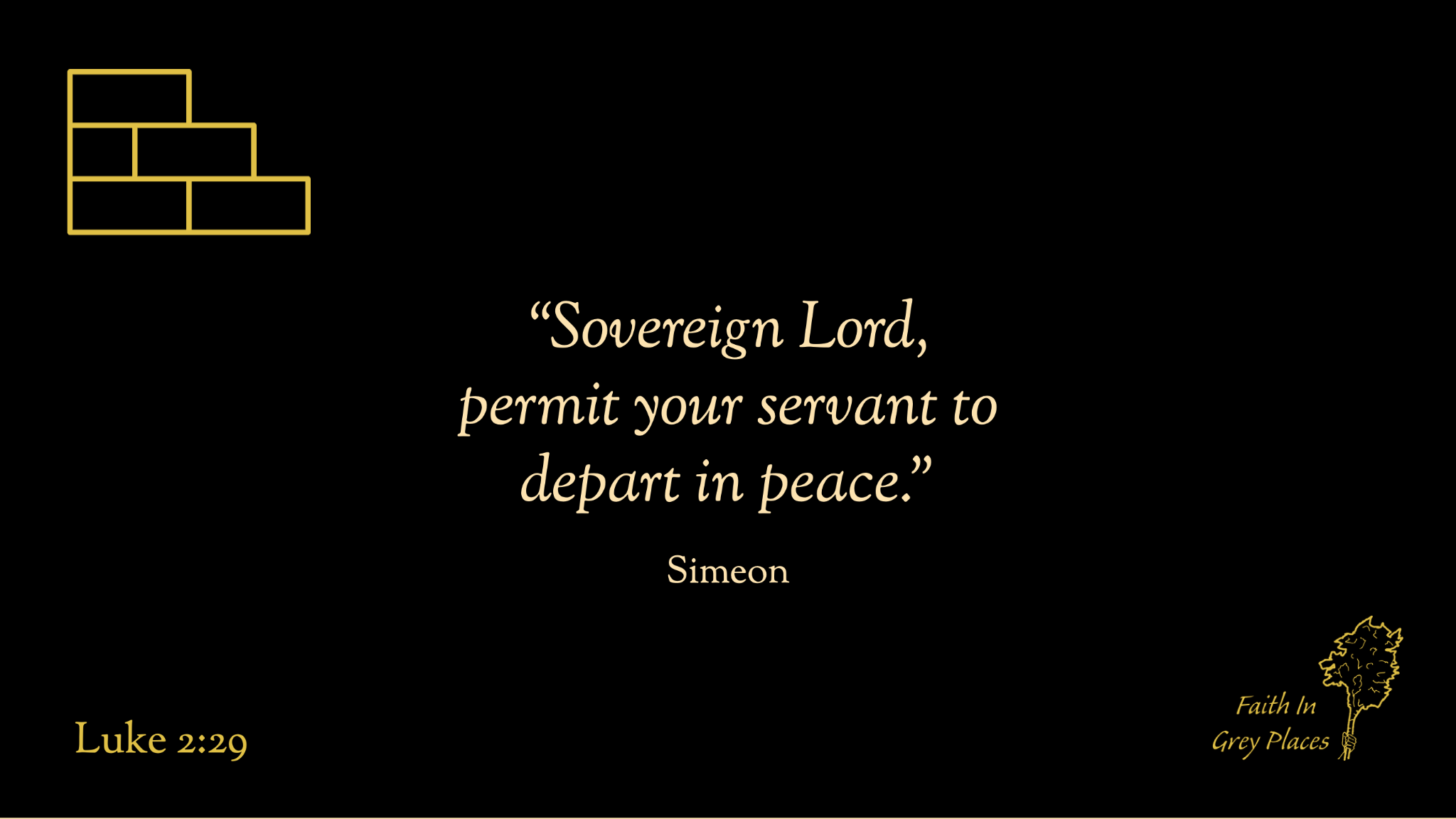 I always loved the nunc dimittis.

That might sound contradictory. Earlier I said I hadn’t thought much of Mary’s song when I was growing up. Because we sang it to boring tunes and referred to it by its Latin name ‘magnificat.’

Well, we also sang Simeon’s song to the same kinds of tunes and used its Latin name. But for some reason, I loved it.

It conjured the feeling of a peaceful evening. When everything is winding down and all is well with the world.

As we’ll see in today’s reading, Simeon was an old man who lived in Jerusalem around the time of Jesus’s birth. He met Mary and Joseph in the temple a few weeks after Jesus was born. He had been waiting to see this promised child and, even though he was old, he knew he would live to see Jesus face-to-face.

The ‘nunc dimittis’ is a prayer where Simeon basically tells God that he’s ready to die. Hence the Latin name: “now you dismiss.”

We often work for things that we don’t see come to fruition. Instead, the harvest comes after our time, when we’ve left a project or an organisation, or – as with Simeon – when we’ve left this life altogether. It’s unnerving, because you can’t control what will happen. You don’t know if your successors will act wisely or be as invested as you were. You don’t know if your work will stand the test of time.

So it’s no small thing to be able to leave with a sense of peace. You can’t continue to hold these things that are so dear to you. Knowing it’s OK if you don’t hold them – that’s huge.

The Jewish people had a very strong concept of rest. It wasn’t about taking a temporary break from labour. It was about being deeply rooted in security and peace. Having a land to dwell in, an inheritance, freedom from oppression and enemies – these were all part of what ‘rest’ meant to them.

In Simeon’s song, I hear the words of man who could lie down in rest. Knowing that God would hold him, and all his hopes, safely and securely.

OK, Simeon’s prayer isn’t technically a song. The Greek says that he “said” these words. But it’s definitely poetry and I think of it as a song.

As an old man, Simeon had a personal and individual sense of waiting for Jesus’s birth. But there was also a collective sense of waiting that he shared with the Jewish people. What’s interesting is that he expresses his hopes in quite different ways to Zechariah and Mary.

Mary rejoices that God is bringing justice to the poor and fulfilling his ancient promise to Abraham. Zechariah rejoices that God will bring an end to the Jewish people’s sin and rescue them from their enemies.

Simeon however, talks about the Gentiles. For sure, he echoes Zechariah (and Isaiah) when he describes Jesus as a light. But this time the light is not just for Israel; it’s for everyone.

There’s much more to be said on this. For now, I want to pick up a couple of points.

Firstly, it says Simeon had waited to see “the Lord’s Christ.”

‘Christ’ is a Greek word meaning ‘anointed one.’ Its Hebrew equivalent is ‘messiah.’ In the Old Testament, anointing someone with oil was a sign that God had chosen that person for a special purpose. Like being a priest or a king.

By calling Jesus ‘Christ’ the implication here in Luke’s gospel is that Jesus is an ‘anointed one.’ Which is fitting given what we already know about Jesus being a king and a mediator.

But there was also this idea of ‘the’ anointed one, a Special Someone, long foretold, that God would send to Israel with a great saving purpose. And Luke is referring to this too. Jesus is the Christ.

The second point I want to draw out is how Simeon refers to himself as the Lord’s ‘servant’. The Greek word actually means ‘slave,’ but as the NET’s translation notes explain, it’s used like an honorific title. The intended meaning here is someone specially appointed by God for specific tasks. It denotes honour and privilege.

Knowing that gives colour to what Simeon actually meant (and Mary, for that matter). But it’s also interesting because many of these Old Testament Special Someone passages talk about the Lord’s ‘servant.’

Thank Jesus for being willing to come into the world and serve us. Ask him to give you an understanding of what it is to serve with integrity and to rest in the satisfaction of your work.