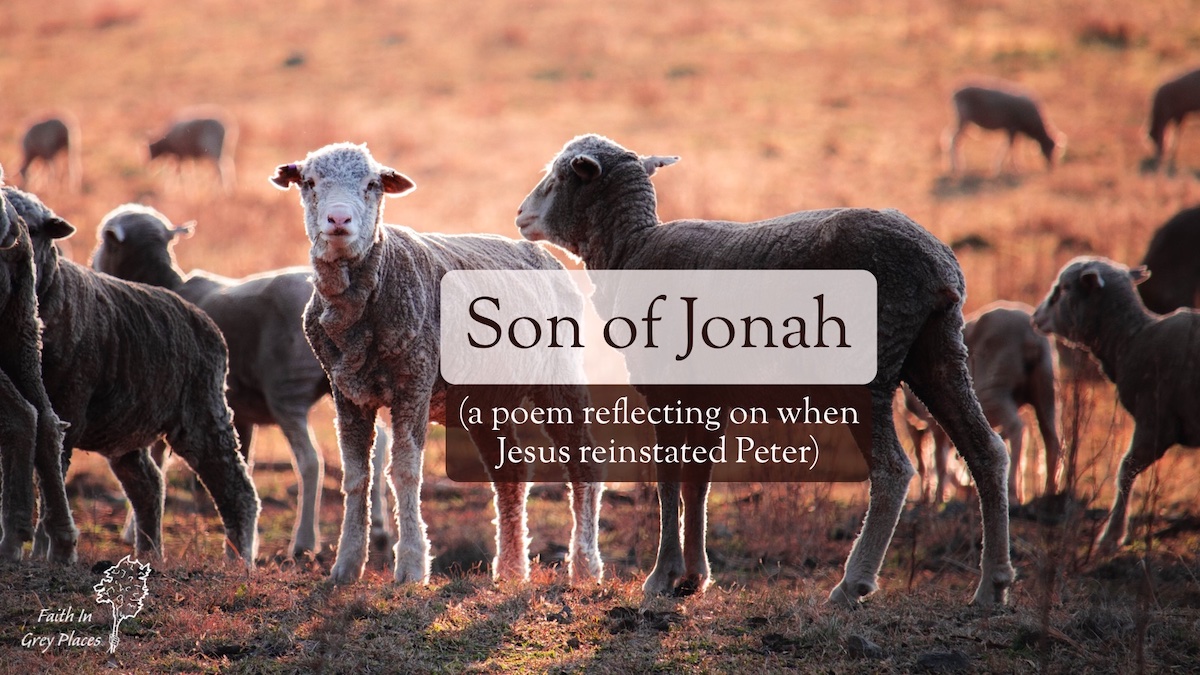 Today’s poem draws on the story of Jesus reinstating Peter in John 21:15-19. I always found this a strange story growing up, but struggled to put my finger on why. It seemed odd that Jesus would distress Peter by asking him the same question three times, or indeed respond to that distress by telling Peter that Peter would die for him.

There was also the question of the Greek and what that meant. The first two times Jesus asks if Peter loves him, he uses the Greek agape for love, but the third time, he uses philia which doesn’t have such a rich meaning. I was sure there had to be deep significance in all this but I couldn’t see what it was. (Peter responds with philia each time.)

People had helpfully pointed out that Peter’s threefold affirmation of Jesus mirrors (and undoes) his threefold denial of Jesus on Good Friday. But still, this story felt strange.

As I wrote this poem, it occurred to me that it’s strange to ask anyone the question, “Do you love me?” Perhaps that’s what threw me. There are too many associations of insecurity or relationship instability. Perhaps the tone of the question would come over better if it was phrased as, “You know how you love me?”

I also saw a pattern in Jesus’s questions for the first time. It’s not that he asks Peter:

There’s a progression. I wonder if each commission Jesus gives Peter somehow links with these, so that whenever Peter thinks about his commitment to Jesus, and the emotions associated with that, he is specifically reminded of these callings.

When he feels only philia, still feed the sheep. When he’s wrapped up in agape greater than that he has for his friends, remember to feed the lambs.

I also saw a lot of myself in this passage. When it comes to God’s calling and commission, I want to be willing to take what God gives but I also want it to be exciting too. But I’m often afraid that neither will be true. I’m simultaneously afraid of my own ambition, but afraid that God will stifle it.

I wonder if there was something of that in Peter. At the last supper, he promised he would sooner die for Jesus than let harm come to him. Before it was dawn, he’d denied three times that he knew Jesus. I wonder if he was shy of making any kind of big promises again; perhaps that’s why he replied “I philia you” to each of Jesus’s questions. But this also gives context to Jesus’s prophecy that Peter would indeed one day die for his name’s sake. That was Peter’s big promise and Jesus said it would happen — not in misguided emotion or zeal, but for real.

So anyway, this is my poem for today. If you didn’t know, today is called “Vocation Sunday” in the liturgical calendar, or even “Shepherding Sunday”. And when you think about this story, it’s not hard to see why.

I get it. You don’t want to overstate your case
Or let ambition trick you into losing face.
You want to bend and be prepared to serve the poor,
To set yourself aside and want what I want more.

But Simon, I know you love me more than these
With whom you’ve laughed and shared so many memories,
I know the day will come when you’ll make good your claim
That you would stretch your hands to magnify my name.

So Peter, trust me when I say I’m trusting you
To feed and tend each precious lamb and ram and ewe.
Don’t think yourself as unremarkable or small,
You’re not found wanting, but are worthy of this call.

This week I also learned of a (another) truly remarkable sonnet from Malcolm Guite. This one was on shepherding. He writes:

I found that what came out was a cry of pain, a lament. Jesus’ picture of The Good Shepherd suddenly brought out, by sheer contrast, the dreadful images and memories of all the bad shepherding, the abuses of clerical power for sexual and other purposes of which we have all become belatedly aware and which has done so much not only to hurt all the individual victims but to cast a shadow for many people over the church as an institution and even over the gospel itself.

You can read it here.

Photo by Daniel Morton on Unsplash