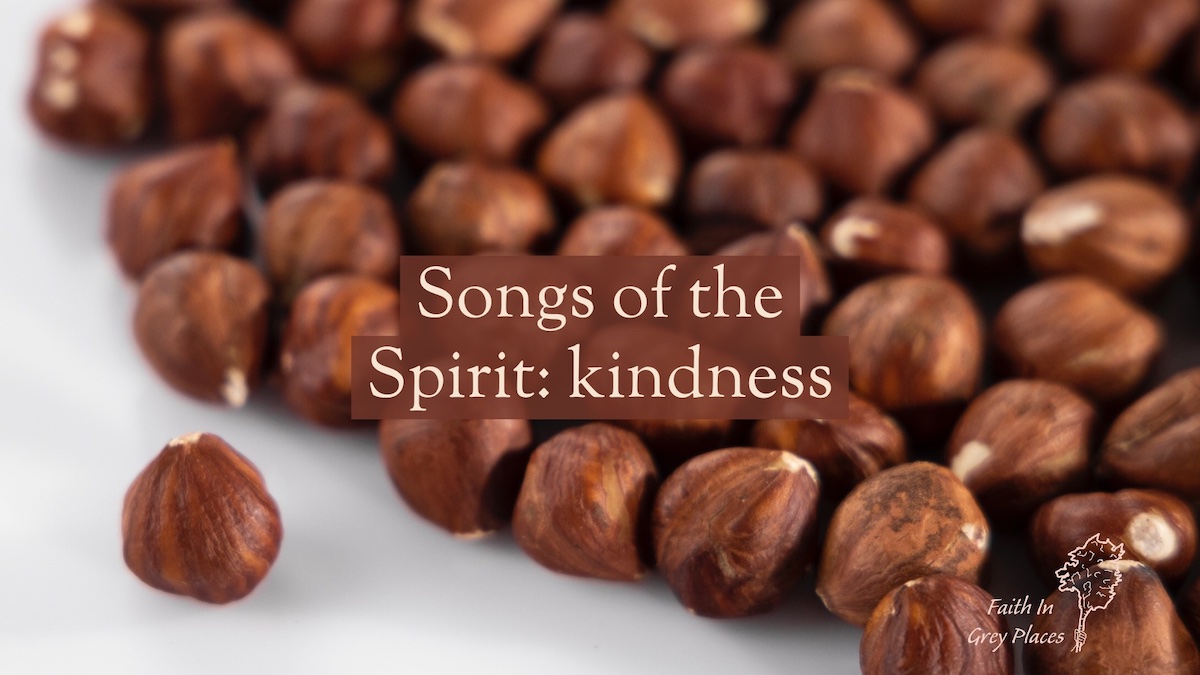 This is part of a series of poems on the virtues described as the fruit the spirit in Galatians 5:22-23. There is nothing like kindness to cement a friendship.

It’s that feeling of “you didn’t have to do this” that makes it so memorable. The kindness might be a gift in a moment of need, a gentle steer away from a pitfall you didn’t know was there, or someone accommodating you when you make a mistake.

I still remember the friend who gave me £10 to pay a bill I couldn’t afford. I remember the polite private message I received, from someone who didn’t owe me anything, opening my eyes to the implications of something I had posted online and needed to remediate. And I remember the car that didn’t crash into me when I crossed lanes to exit a roundabout.

These moments stay with me because they met me in my fragility. They weren’t rooted in deep, long-lasting relationships, they were given just in passing.

Yes, sometimes people have an interest in not letting me fall down (like in the car example above). But they still did something they didn’t need to do, and I feel like I received the greater gift. I was guarded from the greater loss.

Kindness is something that’s unexpected and unwarranted. It is powerful, even in small acts. Perhaps that’s why there are so many stories of kindness from strangers. It’s a microcosm of goodness, given just because.

Before I get to today’s poem, I’d like to share some thoughts about a documentary I watched yesterday The Search for the Lost Manuscript: Julian of Norwich. Julian of Norwich was the first woman to write a book in English but what she wrote was controversial and went against church teachings of her time.

To put this in context, the bishop at the time was Henry the Despenser who not only put down the peasant revolt, but also commissioned altar pieces commemorating his achievement. Never in my life have I seen art depicting the resurrected Jesus standing up while his coffin crushes the poor. But that was the religious art and rhetoric of Julian’s time.

Anyway, she became severely ill and thought she was going to die – but didn’t. Instead she had visions of God, recovered, and became an anchoress. That meant taking vows much like a nun, but more than that: she lived the last 30 years of her life in one room.

And there, she wrote Revelations of Divine Love. The quote that got me, and that relates to the themes of today’s poem, was this:

And in this he showed me a little thing, the quantity of a hazel nut, lying in the palm of my hand, as it seemed. And it was as round as any ball. I looked upon it with the eye of my understanding, and thought, ‘What may this be?’ And it was answered generally thus, ‘It is all that is made.’ I marveled how it might last, for I thought it might suddenly have fallen to nothing for littleness. And I was answered in my understanding: It lasts and ever shall, for God loves it. And so have all things their beginning by the love of God.

In this little thing I saw three properties. The first is that God made it. The second that God loves it. And the third, that God keeps it.

The documentary went on to say that Julian’s manuscript was probably kept quite secret at the time, but was likely known to pilgrims like Margery Kempe, who visited Julian shortly before she died. Julian’s work must have made its way to France because Benedictine nuns there copied it in the 17th Century, and somewhere along the line one of these copies made its way into the collection of Hans Sloane.

Sloane was a wealthy doctor who bequeathed his vast collection of artefacts, books and manuscripts to the nation when he died in 1753. Er… this collection is what started the British Museum. That’s how big it was. Anyway, in 1901, Grace Warrick went to the reading room (now part of the British Library) to look at a manuscript filed under magic and witchcraft. It was called Sloane 2499: Revelations to one who could not read a letter, 1373.

Warrick spent a month copying out Julian’s work by hand. Then she went and translated it. And it’s never been out of print since.

I don’t know about you, but I was bowled over by this whole story: the singular dedication of Julian to give her life to God as she did, and the kindness of people who took her work and made it known more widely. Nuns played a particular and perilous role here because they faced the dissolution of the monasteries in Britain and the French revolution in France.

But her work survived all these centuries and gives refreshment to us in our fragility now.

My poem for this week isn’t as lofty of Julian’s prose but it does capture something how I feel when I feel God’s kindnesses.

Songs of the Spirit: kindness

You didn’t have to
But you wanted to,
Above and beyond
Is who you are.

You didn’t have to
But you wanted to
Because you delight
In all you have made.

You didn’t have to
But you wanted to
And your mercies
Are everlasting.

You didn’t have to
But you wanted to
And, in the best way,
I’m still not over it.

Sharing another picture from artist Helen Yousaf that reminded me of the themes of this poem. This one is called “Up from the pit” and the image is on her Instagram profile and Facebook page.

I liked it because the dark strokes reminded me of Jesus’s crown of thorns and yet there is the kindness of being lifted out of darkness and sorrow.

Photo by engin akyurt on Unsplash