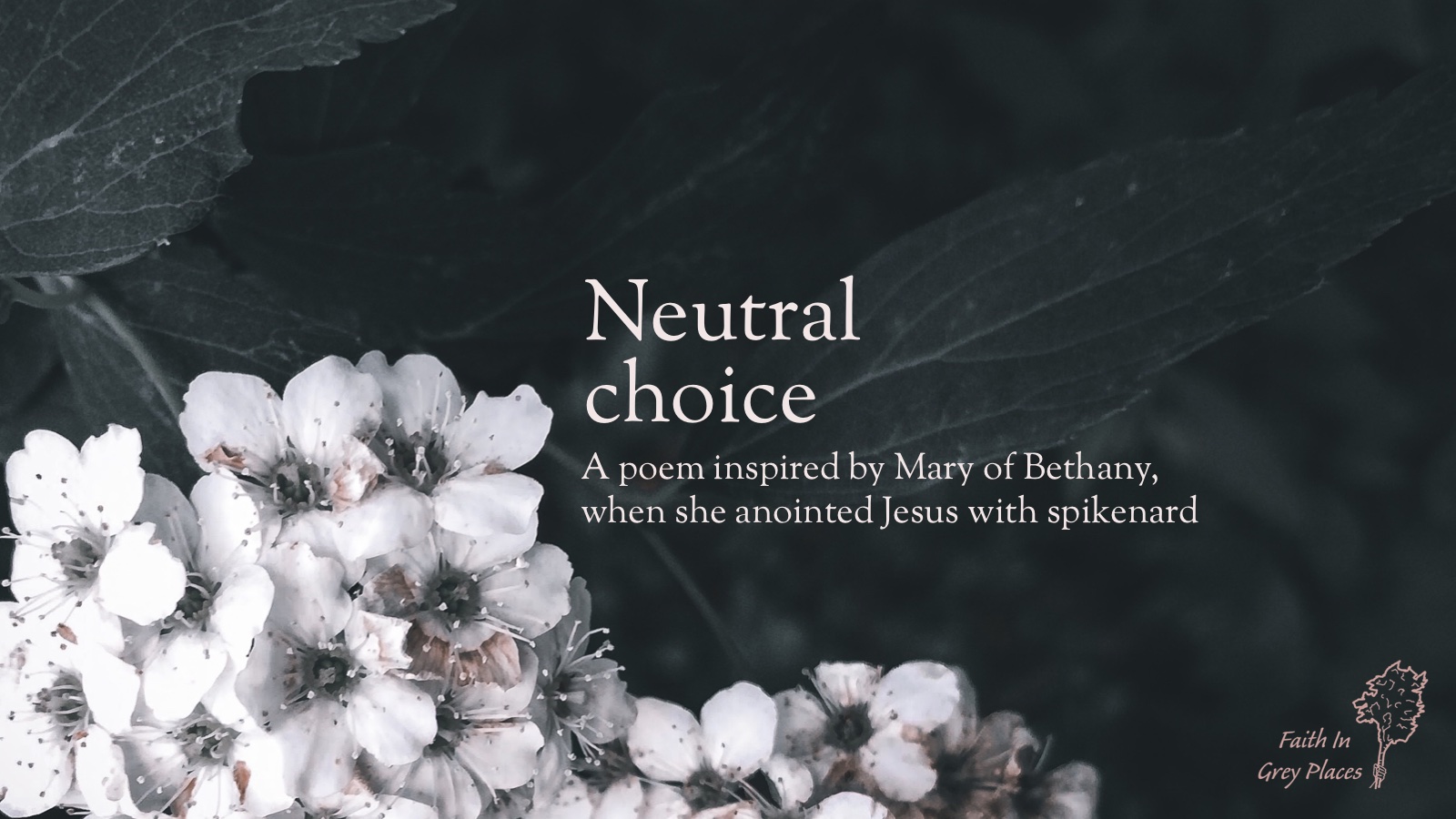 For lent and Easter 2021, I’m writing a series of poems, each exploring the theme of agency through the lens of stories from Jesus’s passion. This first one is inspired by Mary of Bethany when she poured a pint of spikenard over Jesus’s head.

John 12:1-11 says the woman was Mary, and that she poured the perfume over Jesus’s feet. Mark 14:3-9 doesn’t name the woman and says she poured it over his head. Matthew 26:6-13 is similar to Mark’s account, but timed after the triumphal entry into Jerusalem instead of before.

However, they all agree that it was a woman, in Bethany, shortly before Jesus’s crucifixion. They also agree that other people present objected to her actions (John names Judas Iscariot) and that Jesus defended her.

Gifts are a complicated interaction of agency between the giver and receiver. At their best, they speak uniquely about both parties and their relationship, changing and enriching both, in a way that’s not possible on one’s own.

But gifts can also be given selfishly, in attempts to coerce the recipient, or more for the sake of gesture and self-promotion.

Mary’s example is a particularly tricky one because she gives such a great gift – worth a whole year’s wages. It’s so easy for grand gestures to be fake – what was it that made hers genuine?

It’s also interesting to consider how Judas used his agency. He picked upon poor people as some “other” group, not present, without voice, in pursuit of his own agenda. A phenomenon that is all too common today.

What struck me most as I wrote this poem is that how we use our agency is rarely, if ever, neutral. Hence the title.

If only there were a neutral zone,
A space between your will and mine,
Where I could give and you receive,
Or you refuse and I retrieve
And we could both get up and leave
And no one think I’d crossed a line.

If only there were a neutral gift
That made no claim of worth or cost,
That no one would contrast, compare
Or look upon with hostile stare,
That would not leave my heart so bare
Or speak of what will soon be lost.

If only there were a neutral time
When to act or not are both the same,
When history books will never judge
And neither you nor I nor they will grudge
The response I make to this holy nudge
That softly speaks my name.

But a neutral day, there will never be.
And a neutral hour, I will never see.
So I give this flower, that it may be
A memorial, between you and me.

Sydney Carter wrote a beautiful song, Said Judas to Mary that speaks into this story. Here’s the recording on YouTube that I liked best.

Photo by Aryan Nikhil on Unsplash