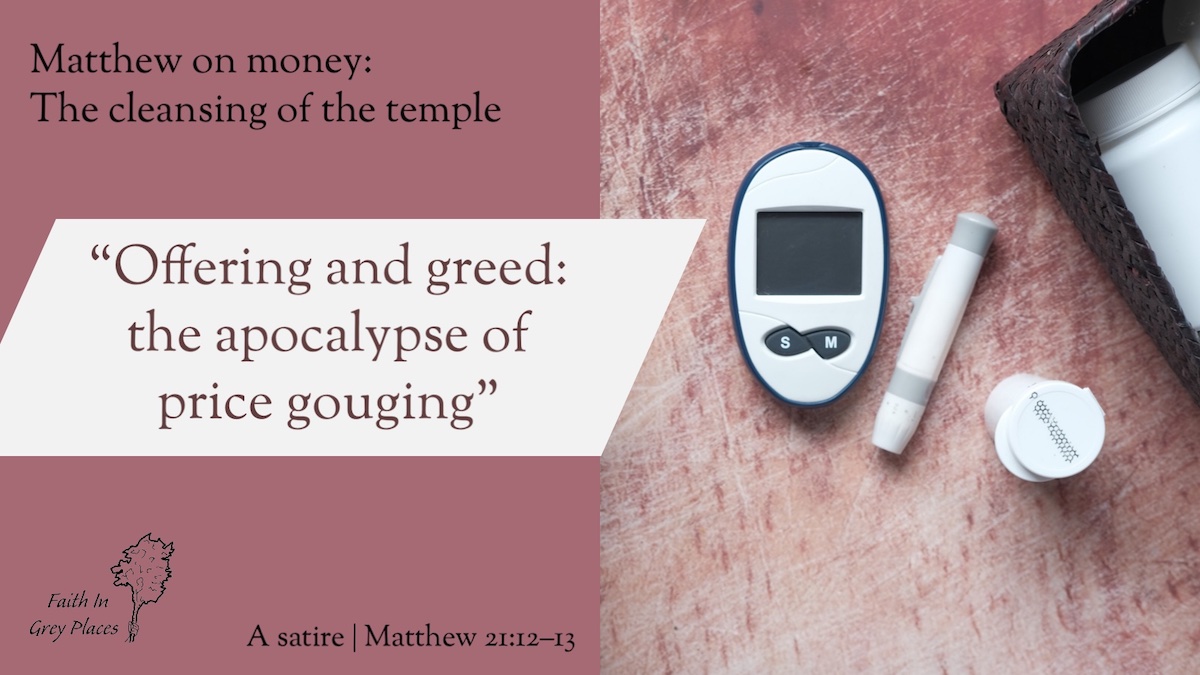 Today, I wanted to write about price gouging – a practice of exploitation through unnecessarily high prices. I noticed some similarities between the story of insulin (how it was discovered and how it is now priced in the US) and the story of Jesus cleansing the temple.

The sketch is 1,000 words long, but it’s also light-hearted for a satire and has a refreshing declaration of Jesus’s ministry.

Below are some notes that explain the events the sketch refers to, but don’t feel like you have to read them all.  Skip to the sketch

What I mean by ‘price gouging’?

The term ‘price gouging’ is a pejorative one – people use it when they’re talking about something they think is unethical. But it’s worth thinking through when this term is deserved.

As I was researching for this week, I read a paper titled, “What’s the matter with price gouging?” by Jeremy Snyder. He argued three things:

Firstly, price gouging only applies to necessities – things people need to live. It can’t apply to champagne or diamonds, but can apply to food, water and medical supplies.

Secondly, yes, price increases can encourage rationing and can reflect increased risks and costs associated with distribution, especially after a disaster. However, there is a fundamental lack of equity when essential goods are available solely according to financial ability to pay.

Third, there is a community aspect: people are more vulnerable to price gouging when the market is their only means of access to an essential good.

It used to be that Twitter accounts only had a blue tick if the holders of the account had proven its identity. However, after Elon Musk took over and said anyone could have the blue tick if they paid $8, lots of impersonator accounts have sprung up.

One of them posed as the US pharmaceutical company Eli Lilly, which is a publicly listed company.

According to Investor’s Business Daily, Eli Lilly and two other companies, Novo Nordisk and Sanofi, supply 90% of the world’s market for insulin – and this includes the UK. However, because of how things work in the US, prices in the US are substantially more than cost. Yes, Eli Lilly advertises a scheme where people who can’t afford normal prices can buy a month’s insulin for $35. But that doesn’t stop the horror stories of people facing costs comparable to mortgage payments.

And given that people with type 1 diabetes need insulin to live, you can guess how popular these high prices are.

Anyway, a fake Twitter account, posing as Eli Lilly, tweeted that insulin was now free of charge. The tweet caused a storm and even Senator Bernie Sanders weighed in, pointing out that that the price had gone up “by over $1,200 since 1996 to $275while it costs less than $10 to manufacture.” Forbes reported on the story here.

Then the share price of Eli Lilly dropped 4.5% and the other two major suppliers also saw their share price drop by about 3.5%.

And whilst there’s a very serious conversation to be had about misinformation, I did find something very satisfying about the fall. Investors should be in it for the ethics, not just the money.

So where’s the link with Matthew’s gospel?

I was reminded of the time when Jesus cleansed the temple of the money changers and market sellers.

Ever since the time of King Josiah in the Old Testament, the temple had been the only authorised place to offer sacrifices. Moreover, some types of sacrifices weren’t exactly seen as optional.

It can be hard for modern-day Christians to appreciate what the significance of this would have been to first-century Jews, given that we don’t have a sacrificial system. If anything, we tend to see the concept of offering animal sacrifices as burdensome and not something anyone would do voluntarily. But if that’s as far as our appreciation goes, then we won’t understand the mindset of people who worshipped in this way.

Yes, it was a duty, but ritual can be both a duty and a joy. And even when it isn’t a joy it can still be a rite that, as with a funeral, palpably blesses the soul.

Now, money itself wasn’t necessarily the problem. The system was intended to be a legitimate means of income for the Levites and priests. But we get the sense that the system was being rigged unfairly.

It wouldn’t have been the first time that priests had acted corruptly; 1 Samuel 2:12–17 records how (just before the time of Samuel) the sons of the high priest Eli abused their power as priests. We also know that in Jesus’ time, some religious sects maintained traditions were manifestly unjust. I wrote about one of them last week in my sketch about Matthew 15:1–12.

For this week, I wanted to highlight the sense of frustration and anger that builds up when people are unnecessarily blocked from something that is essential to them. And for a first-century Jew living in Palestine, this included worship at the temple.

I borrowed a little from the account in John’s account, though we should remember that John places the cleansing of the temple at the start of Jesus’s ministry; the other gospels place it near the end. If you want to read more about that, the NET has some useful notes.

Offering and Greed: The Apocalypse of Price Gouging

PREMISE: A comedy that contrasts monopolisation and price gouging with the free gift offered in the saving work of Jesus Christ.

When Simon returns from the temple in Jerusalem, angry at the unaffordable price of sacrifices, his friend Sarah tells him about a strange dream. Together with their friend Mark, the three speculate whether Sarah’s apocalyptic vision of the future could tell them something about their own time.

Photo by Kelly Sikkema on Unsplash