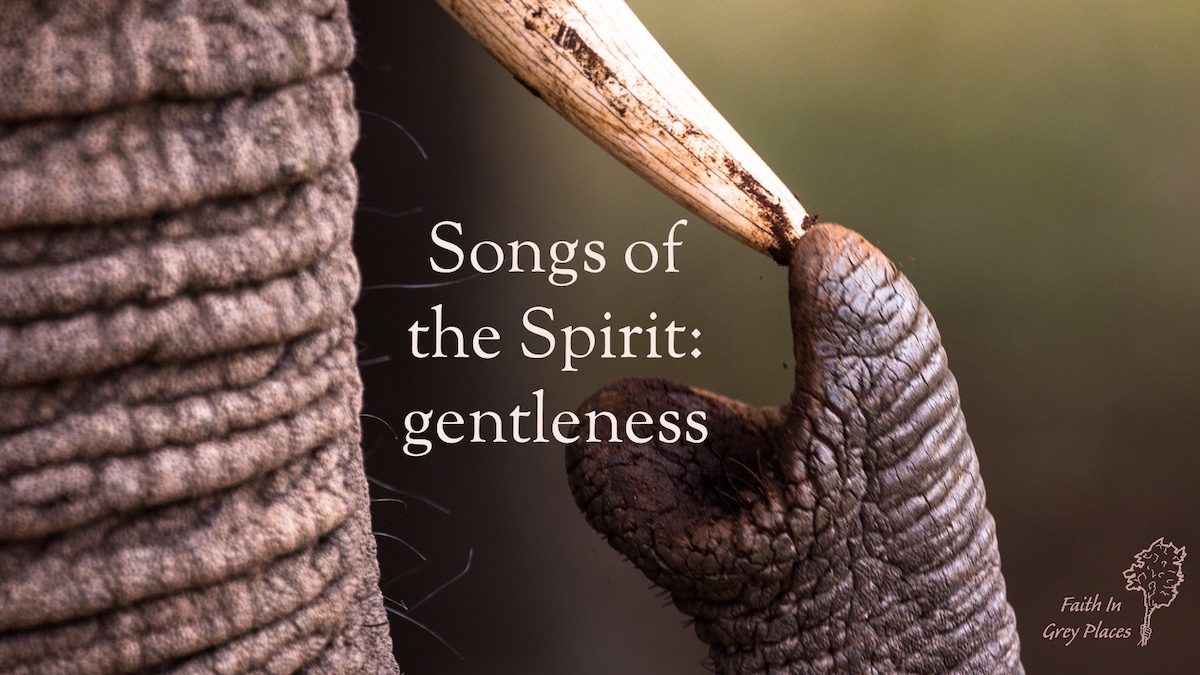 For the next few weeks, I’m writing a series of poems on the virtues described as the fruit the spirit in Galatians 5:22-23. I started with self-control last week, and this week is gentleness.

I found out some interesting things about the Greek word translated as “gentleness”. The word is πραύτης meaning “meekness”, “gentleness” or “humility” and it’s the same word used in the beatitudes in Matthew 5:5 (“Blessed are the meek, for they shall inherit the earth”).

It’s also how Jesus describes himself in Matthew 11:29 (“Take my yoke upon you and learn from me, for I am gentle and humble in heart”) and the word used in the translation of Zechariah to describe Jesus’s triumphal entry into Jerusalem in Matthew 21:5:

‘Say to Daughter Zion,
“See, your king comes to you,
gentle and riding on a donkey,
and on a colt, the foal of a donkey.”’ (NIVUK)

I often associate considerateness with gentleness, and it seems there’s another Greek word that gets closer to that meaning ἐπιεικής (see, for example, Philippians 4:5 or 1 Timothy 3:3), but of course that’s not the word used in Galatians 5.

All this made me wonder whether ‘gentleness’ as Paul had in mind, was more about how a person uses power over others.

In fact, there’s even a point in 2 Corinthians 10 where Paul exclaims: “By the humility and gentleness of Christ, I appeal to you”. (NIVUK)

When I read this verse in isolation, I was struck by the force of it. It’s a climax point within a wider argument spanning several chapters as Paul appeals to the Corinthian church to trust him and not think little of him. It’s actually one of my favourite passages because it alludes to one of the most violent Old Testament laws, whilst also contrasting strongly against it. I wrote more about that for CBE International here: Paul’s Prodigal Daughter.

Again, it makes me think that this is principally about how we exercise power over other people. If I was to name two characters that embodied gentleness most clearly, they would be Hughan from The Knight of Eldaran (a trilogy written by a friend of mine) and the king in my as-yet-unwritten novel (I gotta dream). Apologies, I doubt very few people will understand either reference but the point is they’re both kings.

So anyway, with all that in mind, I wrote today’s poem.

Songs of the Spirit: gentleness

Blessed are the gentle
For they shall inherit
A world of thankfulness.

Majestic and gracious,
They shall command
With all the loveliness of wisdom.

Considerate and grounded,
They shall judge
With mercy and compassion.

Unassuming yet knowing,
They shall steer
Away from evil and wrongdoing.

Watchful and unfaltering,
They shall bear
The weight of responsibility.

Blessed are the gentle,
And blessed are all
Who receive from them.

I have found a simply stunning Instagram account run by artist Helen Yousaf. This picture is called “Blessings in your wake” and it reminded me of the first verse of this poem. She kindly said I’m free to share so long as I’m sharing hope!

Prints are available for purchase here.

Photo by jean wimmerlin on Unsplash