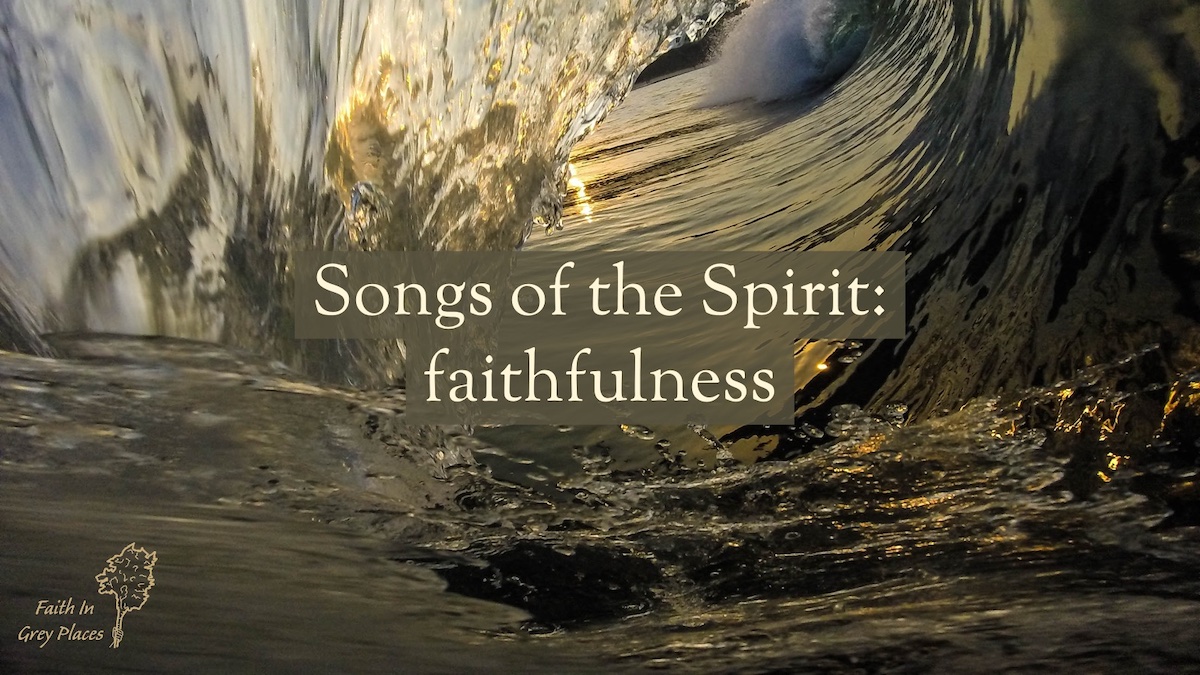 This is part of a series of poems on the virtues described as the fruit the spirit in Galatians 5:22-23. Faithfulness is such a big word. I think if there’s one thing, just one thing that God wants us to know about him, it’s that he is someone who fulfils his good promises. And of course, faithfulness is a huge part of that.

As I sat and considered the word in more detail, five words came to me:

Present – faithfulness is about being there for someone, whether they know it or not. It’s about staying with someone for as long as they need.

Consistent – faithfulness is about having patterns in your behaviour. About being, on some level at least, familiar and predictable. Even when you surprise people, your actions are recognisably congruent with who you are.

Truthful – faithfulness is not just about telling the truth, but finding a way to tell it and being honest about it, even when the person listening will find it hard to accept.

Reverent – faithfulness has regard for other people’s agency. It doesn’t seek to override others, but to give space for them and work with them. So, for example, honouring the bounds (limits) of a person’s consent is a form of faithfulness.

Safe – faithfulness is able receive and hold whatever we give, no matter how big or heavy that is. And it’s nimble too – able to handle the delicacy of whatever we hand over.

As I wrote today’s poem, I thought about the different images we use to describe God and his character. The Bible often uses the image of a rock for steadfastness, yet that image also suggests being unyielding. And that can be good insofar as we apply the image against things that would harm us, but it is less hospitable if we think about how God receives us.

Of course, this is why we need many images to describe God’s mysteries. It’s also why should lean into the reasons for why the image was chosen – looking for what a person was trying to say, not what they’re weren’t trying to say. There’s still a place for stopping to think about unintended messaging in the images people choose; sometimes these reveal something about that person’s beliefs or worldview that needs challenging. There’s also a place for choosing one image over another in the knowledge that some images, whilst true and worthy, will not help a person grow in faith at that particular time.

For this poem, I chose to use the sea as an image of the Holy Spirit. Again, the sea is a multi-faceted image that can be taken in different directions. The Bible often uses the sea to convey chaos, overwhelming forces and even death itself. Hence in Revelation it says “there was no more sea.” But that’s not where I’m going with this poem about the Holy Spirit!

Instead, I’m thinking of how when you live near the sea, it is familiar and yet different each day. It is also so much bigger than ourselves.

The Bible also says the Holy Spirit is living water, water we can drink to receive life and everlasting refreshment. Though again, I’m that’s not where I’m going with this poem either: sea is salt-water.

But I guess there are two thoughts here. One is that I’m trying to write about faithfulness. As I stop to think about it, faithfulness is much more about being surrounded by God than it is about drinking in his goodness. Just as a rock can bring associations of safety like a fortress or a cave, the sea can be a powerful, impassable barrier of protection.

The second thought is that, perhaps, the Holy Spirit is like the sea in C.S. Lewis’ book The Voyage of the Dawn Treader. As the crew of the Dawn Treader sailed to the farthest East, where Aslan’s country lies, the waters of the sea are indeed sweet and drinkable.

Songs of the Spirit: faithfulness

Before I knew you,
Before I heard the sound of your waters
Or saw the ripples of your waves,
Before I touched the surface of your depths,
You were there.

Evening and morning,
Like the tides that never cease,
You remember your ancient promises
And pour out your very self,
Sweet and good.

You are deep and vast,
And yet willing to break around me,
Strong to hold all that I bear,
And welcoming, as I pour myself
Into you.

Sharing another picture from artist Helen Yousaf that reminded me of the themes of this poem. I don’t know its title but the image is on her Facebook profile.

Photo by Joshua Dewey on Unsplash