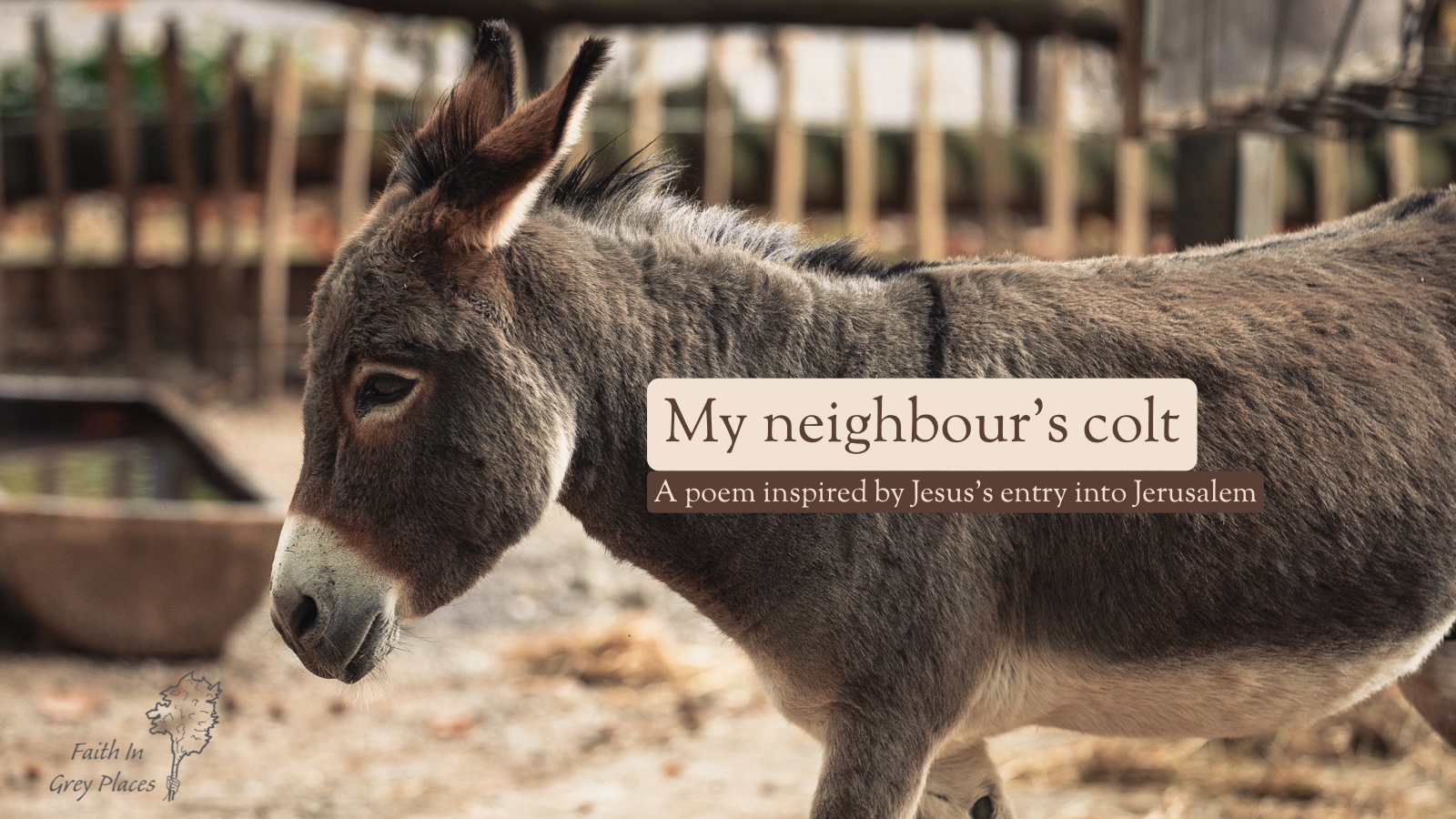 In this poem I wanted explore the idea of following orders in the context of Jesus’s triumphal entry into Jerusalem on Palm Sunday, a week before his crucifixion.

When systemic injustice is uncovered, you often hear this point raised: can the rank and file be blamed for complying with unethical instructions from their commanding officers?

I think we all bear some responsibility for how we act, even if the greater weight of responsibility rests on our leaders. But there’s also vulnerability here. When you follow someone, you have to trust they won’t let you down, that they’re acting with integrity and with appropriate understanding. And followers can’t always judge whether their leaders are getting things right, because often followers can’t see the situation from the right vantage point.

On the flip side though, we also have responsibility for who we choose to follow – and whether we continue to follow them. And that’s what makes questions of agency so complex: we can make a choice to follow in good faith but we cannot control whether our choice will be honoured by the one we put our faith in.

I wanted to explore this conundrum in this poem. The story of Jesus’s entry into Jerusalem is recorded in Matthew 21:1-10, Mark 11:1-11, Luke 19:28-40 and John 12:12-19. It’s widely interpreted by Christians as the fulfilment of a prophecy in Zechariah 9:9-10. (I wrote in more detail about the Zechariah prophecy in my Christmas 2020 series, in the post titled Gentleness.)

Jesus sent two disciples into a village to fetch a young donkey so that he could ride it into Jerusalem. There’s the immediate question: is it OK to simply borrow this stranger’s donkey? But there’s the bigger question too: is it OK to support Jesus riding this donkey into Jerusalem, given the political and religious significance of such an act?

Christians talk about how it’s hard to follow Jesus, often in the sense that it can be hard to do what God wants of us. But sometimes I think the hard part is being sure that it’s OK to follow Jesus – that he’s someone worth following. Someone who won’t let us down.

Here is the poem. I’m undecided whether it should have three verses or four. What do you think?

Thou shalt not steal thy neighbour’s colt.
But hey – I’m only borrowing.
The rope is easy to untie,
And I intend to bring it back.
But if this creature comes to harm
Can I say it’s not my fault?
Or did I steal my neighbour’s colt?

Thou shalt show love with all thy strength.
But hey – I’m only following
And acting on my lord’s command.
Yet is it right that I should hide
Behind another’s choice or will?
Can that absolve me of all fault
When I lead away my neighbour’s colt?

Thou shalt not falsely testify.
But hey – is it dishonouring
To ask again just who he is?
Is simple trust enough to bear
The weight of what we’re saying here?
Will history find we were at fault
To seat him on our neighbour’s colt?

He shall not judge by sight alone,
But lift the low and sorrowing.
Would such a gentle king mislead
Or trick you into his misdeed?
You know his truth has never failed.
Your silence – that would be a fault,
When he comes riding on the colt.

Don’t know if you noticed, but the “simple trust” phrase alludes to the excellent hymn Dear Lord and Father of Mankind, by John Whittier.

This was my favourite rendering of it on YouTube:

All posts in this series can be found via the tag Easter2021.

Photo by Omar Ram on Unsplash.

This website uses cookies to improve your experience while you navigate through the website. Out of these, the cookies that are categorized as necessary are stored on your browser as they are essential for the working of basic functionalities of the website. We also use third-party cookies that help us analyze and understand how you use this website. These cookies will be stored in your browser only with your consent. You also have the option to opt-out of these cookies. But opting out of some of these cookies may affect your browsing experience.
Necessary Always Enabled

Any cookies that may not be particularly necessary for the website to function and is used specifically to collect user personal data via analytics, ads, other embedded contents are termed as non-necessary cookies. It is mandatory to procure user consent prior to running these cookies on your website.