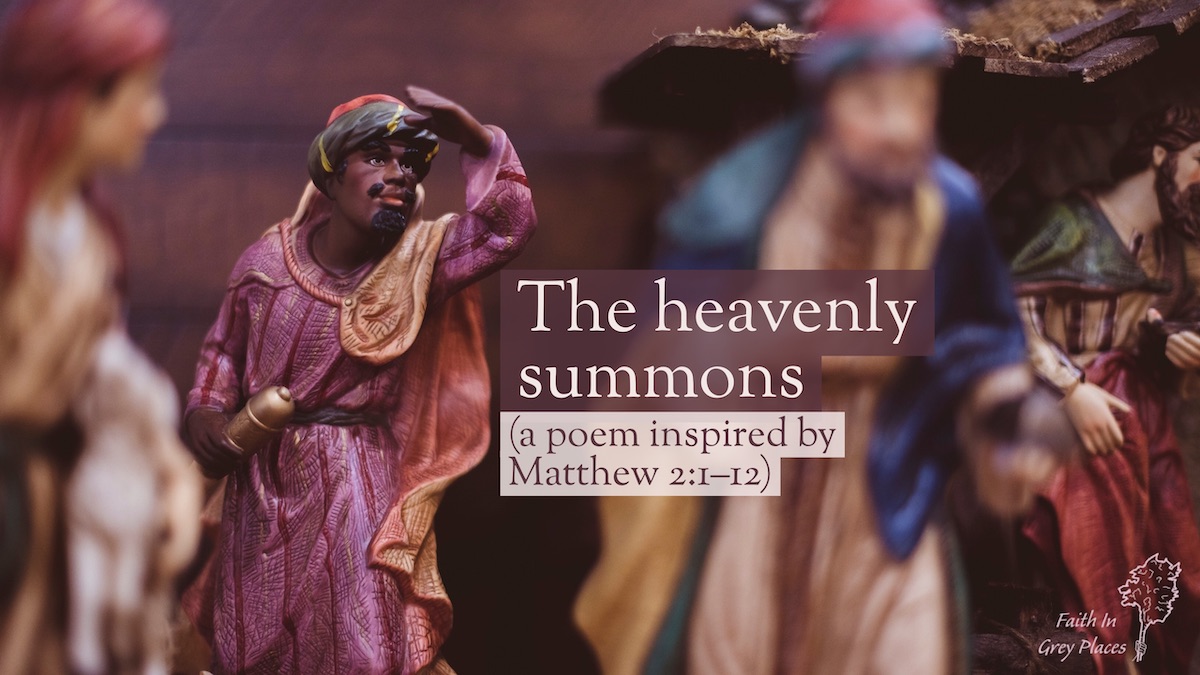 Continuing the poetry series based on the nine lessons from a Festival of Nine Lessons and Carols. Today’s reading is Matthew 2:1–12, the visit of the magi.

As I wrote last year:

These events probably took place one to two years after Jesus was born. There’s no mention of the manger or the overcrowded kataluma that Luke wrote about. …

The magi are pretty interesting. Traditionally they’re the ‘three kings.’ But there’s nothing to say there were only three of them.

Also, it might be more accurate to describe them as magicians. The Greek word for ‘magi’ originally referred to Zoroastrian priests, who studied astronomy and astrology. Though the term was used more widely than this.

When I was working on today’s poem, the line that jumped out at me was verse 2:

‘Where is the one who has been born king of the Jews? We saw his star when it rose and have come to worship him.’

It hit me that the magi expected to be only a few in a crowd of many. I was reminded of the ballet The Sleeping Beauty where the whole kingdom and six very important fairies are all invited to come and celebrate the birth of Princess Aurora. The point is: the magi probably expected to be the outliers and latecomers to a major event. Maybe they wondered whether they would even be granted an audience.

So, imagine their bewilderment when they arrive and… nothing is happening.

Hence their question: ‘Where is the one who has been born king of the Jews?’

Tragically, their encounter with Herod stoked his jealousy and paranoia, ultimately resulting what is called the ‘massacre of holy innocents.’ I don’t dwell on that for today’s poem, but if you want to read more, I wrote about it last year.

I like the idea that the magi weren’t embarrassed at being the only ones who came. Yes, the shepherds came on the night Jesus was born, but they weren’t a formal delegation. The magi were. Usually when people think something is a big deal, but no one else agrees, it’s embarrassing. But I like to think the magi had no such feelings.

When the stars align, you don’t ignore it,
When the heavens proclaim, you make sure that you saw it,
For when a king is born, the nations should come,
The many assemble at the feet of the one.
You don’t ask if there’s doubt whether you’ll be received,
You take your gifts and you take your leave.

Yet when we arrived, streets were empty of news,
So we asked, “Where is he who is king of the Jews?”
And now here we are, it’s not what we expected,
But then, his fate is to be rejected.
We’re not shy that we came, despite causing a stir,
And we offer our gifts: gold, frankincense, myrrh.

Photo by Ben White on Unsplash