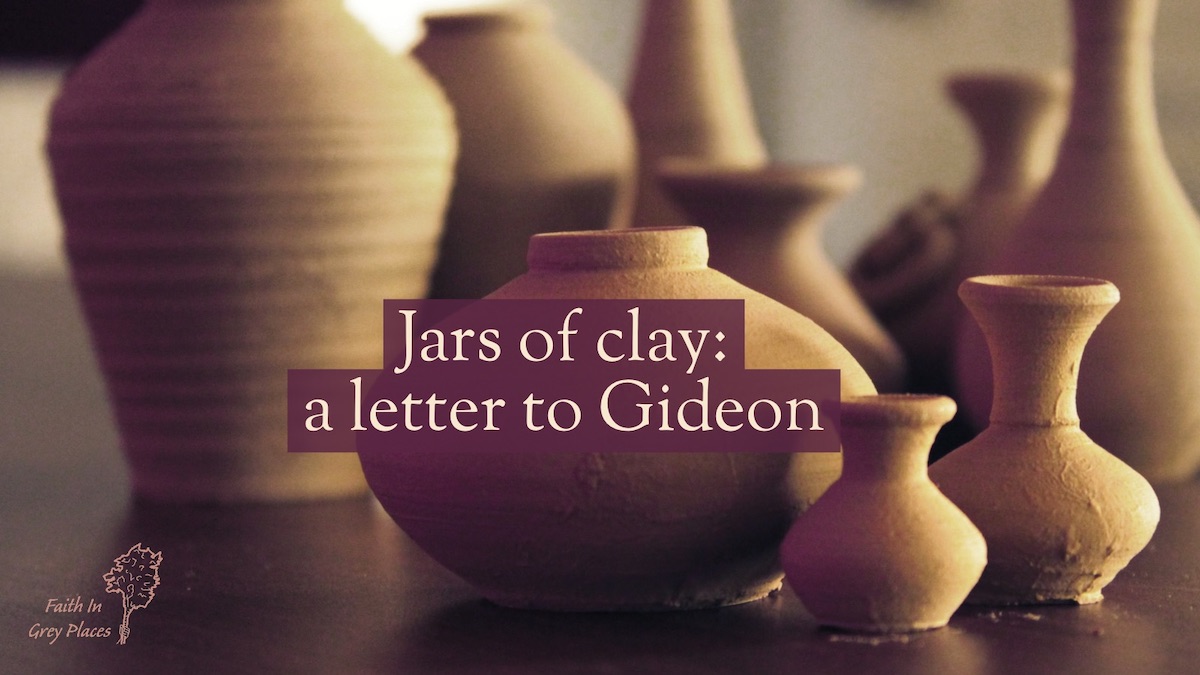 I’m returning to my series of letters to people listed in Hebrews 11 as the “cloud of witnesses” who went before us. Last year I got to Rahab, and this year I’m finishing by writing to those the author of Hebrews didn’t have time to cover: Gideon, Barak (and Deborah), Samson, Jephthah (and his daughter), David and Samuel.

The topic of warfare is common to all of them, and some of these men made disastrous decisions. Even so, I’m looking forward to discovering more about each of them as I write to them.

This is the first time I’ve really sat down with the judges and Hebrews 11 together. I now realise that the author of Hebrews doesn’t present these people in chronological order. Barak was before Gideon. In fact, some have suggested that the Midianite oppression Gideon experienced was the result of a power vacuum created by Barak’s victory. Jephthah also came before Samson, and Samuel came before David. I have no idea why the author of Hebrews mixed up the ordering.

There were also, it seems, some noteworthy judges who the author of Hebrews skips over. The Holy Spirit came upon Othniel, for example, who led Israel to victory and peace for 40 years (Judges 3:7–11). He seems worth of a mention in Hebrews 11, but doesn’t get one. Again, I don’t know why.

But we do have Gideon, and his story is in Judges 6–8.

With the help of a book I bought ages ago (but had never read—because buying books and reading them are two quite different hobbies), I mapped out the timeline and what happened where. It’s not intuitive, so if your geography of ancient Israel is a bit fuzzy, this should help you piece together what happened.

At this point the narrative splits (Judges 8:4 is a backwards time jump).

The northern tribes capture Oreb and Zeeb, but meanwhile Gideon is still chasing Zebah and Zalmunna. He chases them over the Jordan (the ‘other side’ of the Jordan River means on the east side of it), and southwards for about 30 miles to Jogbehah. Along the way, at Succoth and Penuel, he asks for food but the people refuse.

Then, while Gideon is on his way back—it could be before or after his attacks on Penuel and Succoth, but it’s while he’s still east of the Jordan—he is met by fellow Israelites. They bring him the heads of Oreb and Zeeb and have an argument, but Gideon diffuses the tension.

I mapped it out on a modern-day Google map of Israel and Jordan. Because, as my Dad used to say when we drove through Snowdonia in Wales, the mountains don’t change.

“Gideon’s fleece.” “Jars of Clay.” For millennia, your story has captured the imagination.

I first heard it in Sunday school: Gideon, the man who tested God. Yet God played along. There was always tension around whether or not we should follow your example.

Then there was the house group session when we were reading 2 Corinthians 4. I don’t know quite how we managed it, but we bought up your story and how you and your 300 soldiers hid your torches in jars of clay—but no one in the room joined the dots. Paul had deliberately alluded to that event, we just hadn’t clicked.

The point Paul was making (as I’m sure you know by now) is that God works in and through our weakness so that no one can argue that our achievements were made in our own strength. It’s a theme that permeates your story.

If you ask me though, some of the most interesting details have been routinely skipped over in sermons. For example: you destroyed your father’s shrine. And then the men of your town wanted to kill you for it. And yet… you were OK. In fact, your father even said that if Baal was so offended, he could defend his own reputation.

In my time, ideological differences have caused devastating family division. Everyone seems to agree that the world needs rescuing in some sense, but there is no consensus on who or what the enemy is. The stakes are high, but how to fight?

This time, reading your story, I was struck by how quickly you answered the angel when he first appeared. No fear, just “Well, if God is with us, then why is all this happening?” And then, even in your hardship, you were willing to offer a sacrifice.

From the angel’s greeting, to God’s reassurance that you weren’t going to die, to the time when you sent back all but 300 of your soldiers, to the time you eavesdropped on the Midianite camp, I came away feeling that God really met you where you were. He encouraged you all along the way.

And your campaign succeeded. The Midianites were routed, retreating eventually to the east side of the Jordan. The other Israelite tribes rallied to finish what you had started. And when it seemed they were about to turn on you, you offered a humble response that quietened their anger.

Which was… quite refreshing to read, actually.

Except then I was at Judges 8:4. The narrative’s tonal whiplash got me completely by surprise. God suddenly seemed to drop out of the picture and you had a personality change. Instead of being all humble (as you were with the Israelites) you took offence and exacted revenge in blood. And then topped everything off by making an idol.

But that’s quite not what happened.

Only after I read a commentary did I realise that the events of Judges 8:4–12, maybe even Judges 8:4–21 took place before Judges 7:25–8:3. In other words, your threats against Succoth and Penuel were before you disarmed the conflict with your fellow Israelites.

I had to re-read the chapters and piece the timeline together again.

You chased the kings of Midianites (Zeba and Zalmunna) over the Jordan and south for 30 miles. No wonder your army was hungry when you reached Succoth and Penuel. Yet no one was willing to help you. I don’t know… there could have been so many reasons why they were afraid to help. But I guess you were angry that, with everything you’d already achieved (or rather, with everything God had achieved!), they had no faith that you’d finish what you’d started. They had seen Zeba and Zalmunna fleeing, and (it seems) had no special love for either of them, but still they refused to give you bread.

I can see why that got under your skin. I still don’t think it was right for you to kill all the men in those towns, but your reasoning doesn’t feel trivial.

It’s kind of like the golden calf on Mount Sinai: the Israelites were trying to worship God. But they weren’t doing it in the way God wanted. It reminds me of something my husband said recently: idolatry is less about worshipping something other than God, and more about worship that isn’t appropriately mediated.

Which takes me back to the jars of clay.

Paul was writing about his hardships and sufferings, and how—from the outside—these made him look like a failure. (Thinking about it, a similar theme echoes through Hebrews 11.) But he knew that God was working within him and through his hardships to achieve something much more powerful and lasting.

So he didn’t mind if his body was broken, like a jar of clay, because he knew that the ultimate mediator and perfecter of our faith had also been crushed.

Jesus’ disciples once asked him if they should call fire down upon a town after it refused to welcome them. He was not impressed by the suggestion. If I’m honest, I wish you’d been more like Jesus when Succoth and Penuel refused to help you.

But your story is what it is. And I know that the rules of war were viewed differently in the ancient world, and I know that you were fighting to throw off your oppressors, but the tension remains.

And yet, here’s the interesting thing: if military power and might were the currency of faith, you’d be remembered for your conquests. But you’re not.

You’re remembered for the fleece and the jars. I take comfort in that.

I write to you in the peace and hope of the one who has made himself known in the weakness of our flesh,

Photo by Oshin Khandelwal on Unsplash