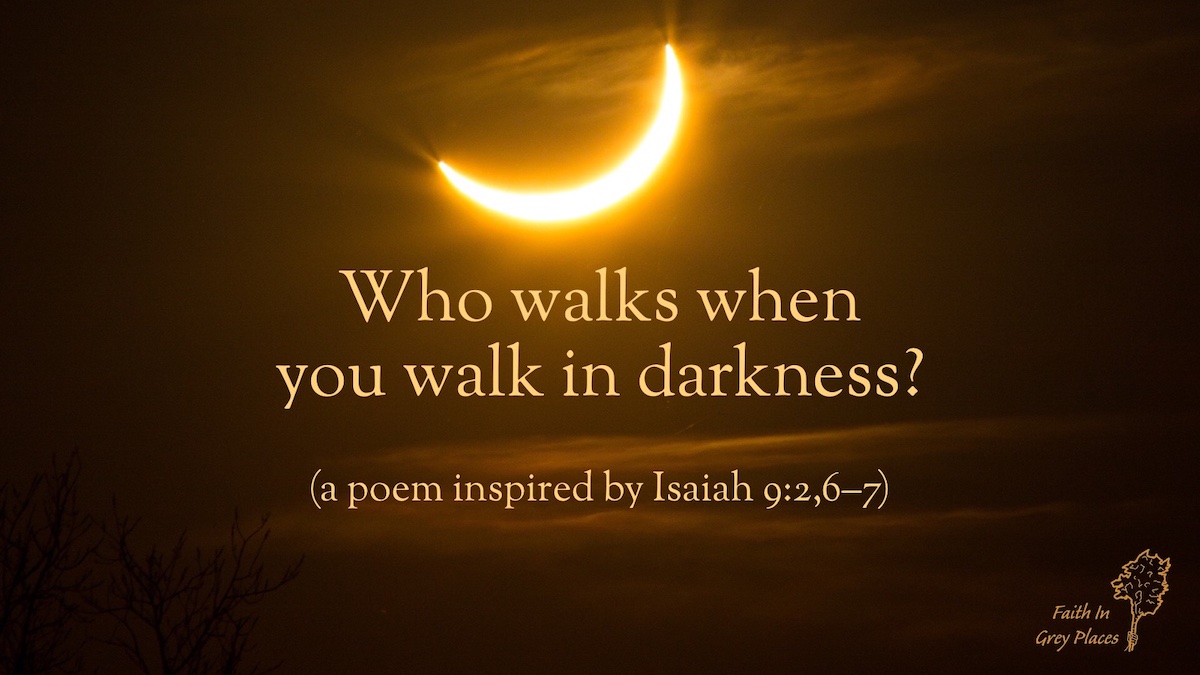 Continuing the series of poems drawing on the scripture readings in a Festival of Nine Lessons and Carols.

OK we’re getting into very famous territory with today’s reading. It’s all about God’s promise to raise up a righteous leader, like David was, who will lead the Israelites out of darkness.

Christians generally interpret these verses as prophesying about Jesus. I wrote more on that in the Christmas study series last year because, well, this passage was my starting point.

Curiously, the Festival of Nine Lessons and Carols misses out a few verses along the way. Isaiah 9:1 (about God honouring Galilee) could be a conclusion to the previous chapter, or the start of a new oracle. Matthew’s gospel takes the latter view because Jesus preached in Galilee (see Matthew 4:15).

Isaiah 9:3–5 are somewhat… bellicose? Certainly, they leverage the images and language of war. God wins, but you can see why these verses aren’t included in carol services.

I wrestled with this tension last year. The Israelites interpreted their experience of the exile in terms of both their guilt and foreign oppression. It’s in that context that they held out hope for a righteous deliverer-king like David – which is what we have in verses 2, 6 and 7. I don’t know how comfortable I am with that, but I don’t want to erase it either; I believe injustice is very real problem and, as I’ve said before, I am not here for a small God. I don’t need him to be safe, just good.

I’ve been learning about Hebrew verbs recently. In English, verbs are in the past, present or future. In Hebrew, verbs are in one of two “aspects.” Either the action is completed from the point of view of the speaker, or it isn’t. Complete actions are in the “perfect” aspect, usually translated as the past tense; incomplete, ongoing actions are in the “imperfect” aspect, usually translated in the future tense.

When verse 6 says the son is born, it’s in the perfect aspect. When it says “he will be called…” that’s in the imperfect aspect. I love the idea of prophecies referring to a future event in the past tense; not because the event has necessarily happened, but because its occurrence is concrete. There is a finality and certainty to it. It is as if it’s already taken place.

And I love the idea that the future tense of what Jesus will be called isn’t so much an event of the future, but a continuing event of past, present and future.

Curiously, these verses talk about the people “walking” or “who walked” in darkness, and there’s an interesting comparison to be made with Lamentations 3:2: “He has driven me away and made me walk/ in darkness rather than light.”

I haven’t been able to decipher the exact meaning of the word used in Isaiah 9:6. My concordance says it’s the verb “to walk” but my lexicon doesn’t list this verse under that verb. And I don’t recognise the prefix and ending of the Hebrew.

I found out while writing this post that when the verb “to walk” has a Niphal stem, it doesn’t mean “to be walked” but rather “to fade away.”

When I discovered that, I knew how this poem was going to begin.

Who walks when you walk in darkness?

Who walks when you walk in darkness?
Who stands straight?
Who treads firm?
Who lives in the
true meaning of the word?

All fade away.
There is no trust
No solid ground.
No resting place,
No journey’s end.

There is no quiet,
No sense of peace,
No sight to guide,
No knowledge to lead.

I ask, who walks when you walk in darkness?

But now, a light has come,
The day has dawned,
The brilliance of the Holy One
Has shone upon the earth.

An heir is born,
A kinsman lives,
A child of ancient promise
Has arrived.

He holds the crown of David
And wears the robe of Solomon,
But as lord of both
He sits.

No dominion endures before him,
No war prevails against him.
No darkness can diminish him
And no depth can consume him.

For the LORD has given him all things,
That he may free the nations.
He loves the ways of justice
And his kingdom of light is eternal.

Isaiah 9:6 is in Handel’s Messiah. You can watch the London Symphony Orchestra performing it on YouTube.

Photo by Geronimo Giqueaux on Unsplash